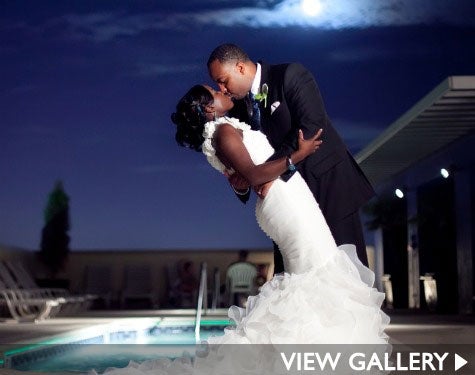 Bride: Richerica Cobb, 31 Groom: Roylin Wolf, 32 Occupations: Richerica — School Counselor; Roylin — High School Biology Teacher and Varsity Boys Basketball Coach Hometown: Houston, Texas Wedding Location: Magnolia Hotel, Houston Texas Wedding Date: June 25, 2010 School Crush: In January 2002, Richerica started her first teaching job at a middle school in Houston, Texas. Overwhelmed by her new surroundings, she sometimes struggled to navigate her way through the building. Luckily, she ran into Roylin, a science teacher who helped her get to where she needed to go. “This guy kept coming up to me and introducing himself and asking me if I need help,” Richerica says. “I thought he was just being nice.” Little did she know, Roylin had already told the other guys at work that Richerica had caught his eye. After a number of run-ins, Roylin asked Richerica to join him and the other teachers for happy hour at Boudreaux’s Cajun Kitchen. When they got to the restaurant, Richerica realized that none of the other teachers were showing up. He had gotten her alone. “I guess that would be our first date,” Richerica laughs. “We talked non-stop all night. We really enjoyed each other’s company.” Secret Love: Richerica tried to keep things friendly with Roylin because she didn’t want to date a co-worker. “We just couldn’t resist each other,” she admits. “We decided to go ahead and date, but we kept it a secret.” For a year and a half Roylin and Richerica kept their romance under wraps, having cordial lunches together, waving at each other in the halls at school. They got busted when their principal put them on the same teaching team. “The students started to pick it up before the other teachers did,” Richerica says. “We would say, ‘No, we’re just friends. We’re just co-workers.’ One day it just came out. Our team leader just looked at us and she said, ‘Are you two together?’ We said, ‘Yes.'” The Love Boat: In summer, Richerica went on a Caribbean cruise with Roylin and his mother’s family. In their room, Richerica kept telling Roylin how excited she was to wake up in the morning and look through the window of the cabin and see the turquoise water and bright sun shining down on them. Three days into the cruise, on June 30, 2009 the ship docked in the Bahamas. “I pulled back the blinds and I said, ‘Oh it’s so beautiful. I love the water. I can see the Bahamas.’ A couple of seconds later I looked at the windowsill and I saw the ring. Then I started screaming and jumping up. I took the ring out and put it on my finger,” Richerica remembers. But she forgot one thing. “‘Wait,’ I said. ‘You’re supposed to ask me.'” Roylin knelt down in front of Richerica and asked for her hand. You already know she said yes. On June 25, 2010, Richerica and Roylin said “I do” in a modern, Morrocan-inpsired celebration. Share their love.