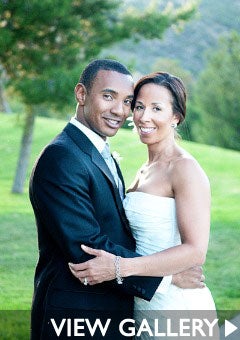 I’m Sold
Peggy and Willie had been parking across from each other in the parking garage of their office building for more than a year and had never seen each other. On one serendipitous day, that changed. The two boarded the elevator together and in just one flight, they hit it off.

“I always say that Willie has the world’s best elevator pitch ever,” Peggy says. “By the time we got to the lobby he had asked me out to lunch and we exchanged cards.”

Willie didn’t just leave their next meeting up to chance either. By the time Peggy got to her desk she had received an e-mail from Willie confirming that he’d love to see her again soon and the two had their first lunch date two weeks later.

Slow and Steady
Although they hit it off and had a lot of things in common, Peggy and Willie dated casually for a number of months, seeing each other when their schedules permitted.

A few years older than Willie, Peggy had her reservations.

“I was looking to settle down and I wasn’t sure if he was in that place,” she tells us, “but I definitely knew that there was something interesting about Willie.”

Eventually, Peggy let her guard down and the two decided to be exclusive. She found comfort in their similarities.

Education was also important to Peggy. A graduate of Dayton University she was looking for a partner with the same educational background. She found her match in Harvard grad, Willie.

It’s A Date
After they moved in together, Peggy and Willie thought it would be a good idea to plan a date night every weekend for them to get out of the house and enjoy each other’s company outside of their day-to-day interactions.

On October 2, 2009, Willie planned the perfect date. Peggy came home and he told her he had made dinner plans at Vibrato, a new restaurant with live jazz that the two were dying to check out.

“You should go get ready,” he said.

While Peggy went upstairs to get dressed, Willie went to work downstairs, lighting candles and setting the mood. He also hid a ring box behind an orchid plant the couple had in their condo. When Peggy returned, she was surprised to see the room transformed.

Willie told Peggy how happy he was to be with her, walked over to the orchid, pulled out the ring box and got down on one knee.

“I was shocked, I think I said, ‘Are we really doing this right now?'” Peggy laughs.

Peggy accepted his proposal with delight and the two headed out to Vibrato to celebrate with dinner for two and champagne.

On June 19, 2010, Peggy and Willie walked down the aisle in a lush, romantic California garden wedding. Share their love…

17 Sweet Photos Of Zendaya And Her Parents

Black Students Are Enrolling At Record Pace To Medical Schools

Yara Shahidi Talks Getting ‘Grown-ish’ Alongside Her Col...