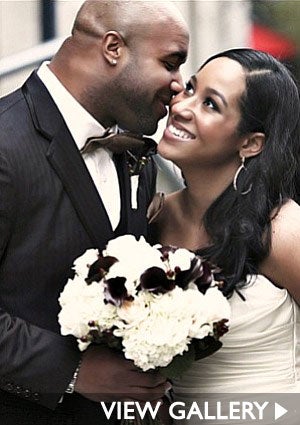 Love in Unexpected Places
Relationship experts will tell you, “Don’t look for love in the club.” Yet, that’s exactly where Janae and Lance found it — although they weren’t looking for it at the time. They were both having fun at a lounge in Seattle, Washinton when Janae’s bright smile caught Lance’s eye. He approached her, placing his hands on hers. Janae was taken aback. Her first reaction was to say, “Do I know you?!” But when she looked at the tall, handsome man before her, she couldn’t help but give him a chance.

The two chatted for a while and exchanged details. Little did they know they had met their future life partners that night.

A Lot to Say:
For their first date, Lance — who was playing football for the Seattle Seahawks at the time — took Janae to a restaurant to get to know her better. They had so much fun together that they couldn’t say goodbye when the meal was over. They ended up watching two movies at the theater across the street and talking some more. At the end of the date, they had spent eight hours together.

More than a Pretty Face:
When Lance and Janae met, they both found each other attractive, but the more time they spent the more they realized they were also on the same page mentally and emotionally.

“We had so much fun together and after I got to know him, I realized that he’s very respectful and very dedicated to his family. He’s a leader and a builder and he has a lot of the qualities that I admire,” Janae said.

“She had everything that I was looking for in a woman,” Lance tells us. “She has a great work-mentality, she is very respectful and I just enjoy being around her.”

Tunnel Vision:
Lance and Janae moved to New York in 2010, when he began playing for the Jets. The two lived in New Jersey and drove into NYC often. One evening they were making their regular trip to the city, but there were a few things that made this trip different. Lance had plans to take Janae to meet up with some friends so that he could propose to her in front of everyone. However, having just had her wisdom teeth pulled out a few days before, Janae wasn’t feeling too social and the two got into an argument on the drive over. Lance didn’t want to see his lady upset, so he turned to her and told her how much she meant to him and asked her to be his wife as they cruised through the Lincoln Tunnel.

“My face was still kind of swollen from having my wisdom teeth pulled and I wanted to smile but I was trying not to,” Janae laughs. “I definitely didn’t expect it. It was an intimate moment and I actually preferred that he and I were alone.”


Janae and Lance tied the knot in a stunning soiree in Downtown Seattle on February 11, 2011. Share their love.