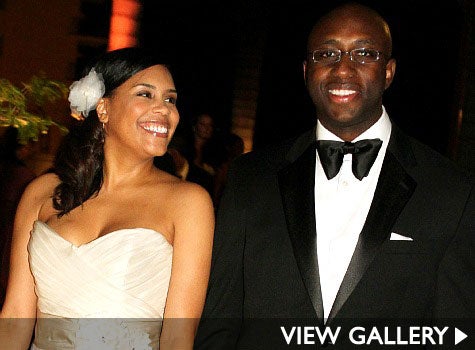 Take It Slow:
Natalya and Jason got to know each other in 2004 when she began interning in the Office of Diversity at Columbia University’s Medical School, which Jason was attending. For four years, Jason would casually pop into Natalya’s office to ask about her studies, hear her jokes and just get to know her better. She never suspected that he was interested in more than friendship.

“There was an attraction there,” Jason confesses, “but I took it pretty slowly and got to know her. I didn’t come on strong.”

The more he got to know her the more he thought she was “somebody that fit the bill.”

“As I got to know her more, I found out she was funny, interesting and great to talk to,” Jason remembers.

After four years of getting to know her, Jason asked Natalya out on a date at the nudging of a close friend.

Love Unexpected:
After that first date, the couple’s romance moved pretty swiftly, but before falling for Jason, Natalya says she was content to be on her own. Jason changed all that when he showed her he was serious about their future.

“The most interesting thing about us is that Jason is younger than me, yet he knew what he wanted and he was really ready to make a commitment,” she explains. “As a girl you grow up wanting to fall in love and have a family and you look for love in places you shouldn’t. As I grew older I was fine with not getting married and I became comfortable with it. I met Jason at a time when I least expected it and it ended up working well.”

Unpack Your Heart:
On November 1, 2009, Jason and Natalya were both flying back into New York City from separate trips. They met at the airport, exchanged embraces and headed to their apartment together. As they unpacked, Jason told Natalya that he got her a present.

“He gave me this really nice box with a really cheap ring in it and said, ‘Oh, you can wear this with your pearls,'” Natalya recalls. “I was thinking, ‘Is he serious?'”

Despite her disappointment, Natalya thanked Jason for the ring and went back to packing. When she turned around again he had another band in his hand.

“Here’s your real ring,” he smiled.

“The ring was beautiful,” Natalya says. “I really appreciated that he paid attention to what I like.”

Fourteen months after saying “I will,” Natalya said “I do” to Jason in a poolside soiree in Miami, Florida. Share their love.