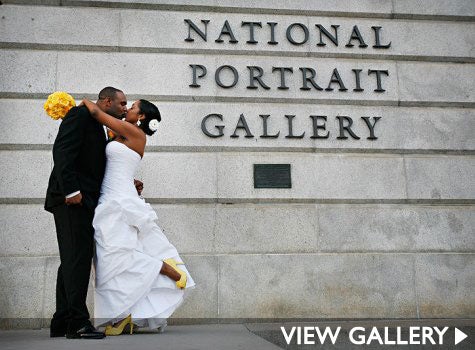 Bride: Lauren Williams Groom: Malik Shareef Occupations: Williams — journalist/writer; Shareef — lawyer  Hometown: Fairfax, Virginia Wedding Location: Hotel Monaco, Washington D.C.  Wedding Date: May 8, 2010  Friends Forever Lauren met Malik when she was a freshman at the University of Virginia. We imagine Malik, then a junior, was delighted to show his future bride the ropes. The two remained friends for two years before allowing any romance into their relationship. By the time Malik graduated and headed off to Law School, their love was undeniable. “I think we got to know each other and our personalities meshed in such a perfect way and we complemented each other so well. So, we fell in love in that way,” Lauren explains. Slumber Party Malik must have know Lauren was the girl for him because she made him feel so relaxed that he fell asleep the first time they hung out alone. “I went to his dorm and we watched TV and he actually fell asleep,” Lauren laughs. ‘I was thinking, ‘Great! I got all dressed up to go watch TV with this guy and he fell asleep!” He later told me he was so embarrassed but he felt so comfortable around me that somehow he fell asleep.” Co-Ed Kiss “Our first kiss was again in a dorm room. It was mine this time,” Lauren remembers. “It was after a party and we were watching TV and he kissed me and we were both like, ‘hmmm.’ We weren’t expecting it to go there, but it was great. And the rest is history.” Going the Distance Lauren and Malik spent much of their relationship living in different places. Malik left Virginia for law school when Lauren was a junior at the University of Virginia then Lauren headed to Syracuse, NY in pursuit of her master’s degree, after which she headed across the ocean to Paris and then to New York City. Finally the two high-achievers decided it was time to let love rule. “At a certain point last year both of us just said, ‘It’s time,’ Lauren explains. “We love each other so much, we’ve been together for so long, so we got engaged. Now I’m finally in Virginia. I didn’t know exactly when it was coming, but I think we knew that it was coming soon because it was just time.” The Zoo? One weekend Lauren headed down to D.C. to visit her sweetheart like she had many times before. She had been expecting Malik to pop the question and when he asked her if she wanted to go to the zoo, she thought, “this might be it.” “He said, ‘If the weather’s nice on Saturday, let’s go to the zoo.’ I was like, ‘The zoo?’ We don’t do that, so I told my friends, ‘I think he’s going to propose on Saturday.’ That Friday, He picked me up from the bus and we went to this really nice dinner downtown and we got this really great table that allowed us to see the city. He ordered a bottle of champagne and he proposed. “What he said to me was beautiful. He talked about the journey that we’ve been through and how happy he is that we made it to this point and he said he knows beyond a shadow of a doubt that he wants to be with me. It just touched me a lot that he went through all that to surprise me. “It turns out, he wasn’t even trying to trick me. He just wanted to go to the zoo.” On May 8, 2010 Lauren and Malik celebrated their long-lasting love in a beautiful spring wedding in Washington D.C. Share their love. Photography: Stephen Bobb — Love Life Images