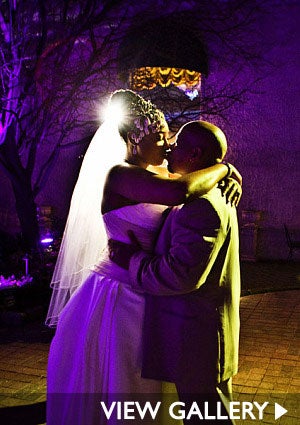 Bride: Kisha Cameron Groom: Eric Dingle Occupations: Cameron — Program Director for Focus Features Africa First Short Film Program; Dingle — Real Estate Developer and President of Best 1 Built  Hometowns: Brooklyn, NY and Chicago, Illinois Wedding Location: The Riviera, Brooklyn, NY Wedding Date: March 19, 2010 Act I: When film producer Kisha Cameron arrived at Chicago’s O’Hare airport for a ten-day stay with Windy City real estate developer Eric Dingle, she was nervous, excited and anxious. Most of all, she was interested to see if the man she had spent hours on the phone with while curled up on the couch in her Brooklyn, NY, apartment was as funny and spectacular as she thought he was. It turned out he was all that and then some. “I was walking toward his car and I was like, ‘Hey, hey, hey!'” Kisha said, remembering first seeing Eric waiting for her at the airport. “We only had ten days together — we were either going to connect or not. We had an amazing time. We ate out everywhere. We talked and talked for hours. It was crazy. We’ve literally been together ever since. It’s been a process, but I’m just madly in love with that man.” Act II: “Travel is another litmus test of relationships,” Kisha says. When her work sent her to a film festival in Burkina Faso, she invited her sweetheart to join her, since he had never been to Africa. After a brief stay in Paris, where Kisha was able to show off her tour-guide skills. “I surprised him with a tour of Paris. It was great to know enough about a city to be able to share it with someone else.” The two continued on to Africa, where Eric would have to fend for himself due to Kisha’s schedule. It was no sweat. “He really embraced it and soaked it up,” Kisha says excitedly. “He figured out how to order beer and fish and was good to go. We just had a great time and didn’t kill each other.” Act III: “I think about six months before we got engaged, I finally got into the headspace that was like, ‘I’m here. I’m not going anywhere. The rest is up to you, Jesus,” Kisha confesses. “Literally seven months later, he proposed.” Kisha flew to Chi town to see Eric, as she had done many times before. It was a typical Saturday morning for the two lovers. They strolled around the city, ate breakfast and enjoyed each other. Then Eric took his lady for a stroll on a nearby beach and a typical day became extraordinary. Eric: [stammering] “I, I, I’ve been looking for rings, but, um, I couldn’t find what would suit you.” Kisha: “What are you talking about? Oh wait! Find me a ring! Wait a minute! Wait a minute! Are you trying to propose to me?” Eric: “Yes” Kisha: “Well, you need to propose to me.” Eric: “Will you… I mean… could you… will you marry me?” Kisha: “Absolutely!” [Cries] To Be Continued: “True love stories never have endings.”  –Richard Bach On March 12, 2010, Kisha Cameron and Eric Dingle tied the knot in a beautiful Brooklyn ceremony with nods to the bride’s connection to Africa and emphasis on the couple’s strong belief in family. Share their love. Photos courtesy of Parris Whittingham Photography.