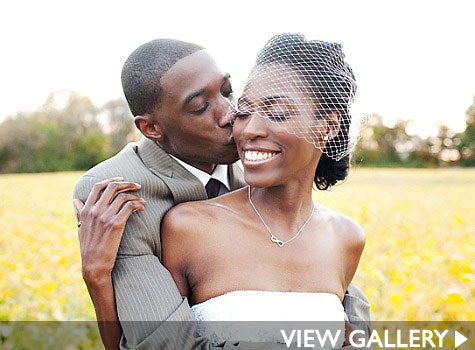 Love in This Club
“I never thought that the guy I met at the club would be my husband,” Kameela laughs. But that’s exactly where she met Fred. The two struck up a conversation at a New York City hot spot and ended up talking all night long. When it was time for everyone to head home, Fred offered Kameela and her sister a ride home. “He doesn’t know this, but he earned a few points that night for his thoughtfulness,” she tells us. Before she got out of his car, Kameela dropped him her phone number.

My Funny Valentine
Determined not to have her heart broken anymore, Kameela had built up a wall to protect herself. Still, she was open to spending time with Fred and seeing where their long phone conversations led.

“I could tell from early on that she was not going to do a whole lot to make me think I was getting anywhere,” Fred says. “I knew I would have to put in my work to win her over.”

After six months of putting in work — about two weeks before Valentine’s Day — Fred placed his cards on the table. He expressed how he felt about Kameela and told her he wanted their relationship to be exclusive. He left the ball in her court and said that she could take as much time as she needed to give him an answer.

“I was nervous about letting my guard down,” Kameela says, “and I didn’t really know how I wanted to approach telling him that I was ready.” She used February 14 as the perfect day to let him into her heart.

“When Valentine’s Day came, I gave him a card and in it I basically wrote, ‘I know it may seem cliche to do this on Valentine’s Day, but as of today I’m exclusively yours.’ I felt that was better than calling him up and saying, ‘OK, I guess I’ll check the ‘Yes’ box.'”

Their First ‘I Love You’
“We were hanging out at a party at a spot called Eugene’s in New York City,” Fred recalls. “We were both sitting down and just having a quiet moment, not saying much. Kameela said to me, ‘What are you thinking?’ And I said, ‘I’m thinking I’m in love with you.’ It’s a very vivid memory for both of us.”

“My heart melted right there! Once he put his feelings on the line, I knew that it was only right for me to do the same,” Kameela says. “I said to him that I was just thinking that I felt the same for him. Then I said, ‘I love you too!'”

Token of My Appreciation
By 2008 the couple had moved to Atlanta, where Fred attended graduate school. On August 9, 2008 Fred took Kameela out for a ‘Kameela Appreciation Dinner’ and when they got back to their apartment, they noticed the door was unlocked. Kameela was shaken by the possibility that someone had broken into their place, until she opened the door to find rose petals and candles all throughout the apartment. Fred had asked a friend to creep into the apartment while they were out to set the mood and even burned a CD filled with romantic songs, that was playing when they walked through the door.

Fred told Kameela to head out to the balcony, where she found a pedestal with a ring box on top if it. Fred opened the box, got down on one knee, and said, “I love you, babe. Will you marry me?’ She said, “Of course.”

The couple headed back up north to New Jersey when it came time for to tie the knot. They said, “I do” in an intimate garden affair at Fred’s Aunt’s private home. Share their love.