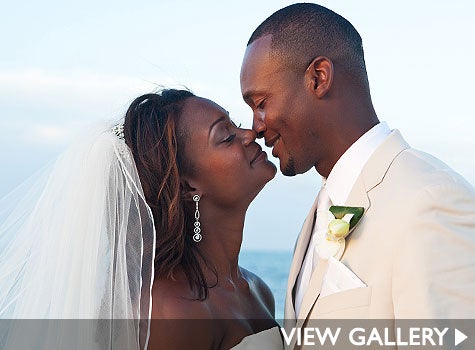 
Blame It On The Non-Alcohol: Rodney met Cassandre at her sister’s house, when she invited him over for dinner. Rodney, a light drinker, was so taken by Cassandre’s smile he faked drinking the martini’s she was making, and later pretended to be too tipsy to drive home just so he could linger a few more hours and get to know her better.

Worth the Wait: Rodney and Cassandre hung out as friends for about a year before they became a couple. “He was so easy to be around, unlike a lot of other guys,” Cassandre remembers. “It was really chill, that’s what I really liked about him.”

Mom’s the Word: Rodney took Cassandre and her mother with him to Turks and Caicos in October 2007 to watch him play in a Caribbean golf tournament. Little did they both know that he had planned to propose, and that all his friends at home were in on the surprise. At a supposed mixer for the competition, Rodney pulled Cassandre to the center of the room, got down on one knee and popped the question. She was speechless. Luckily Cassandre’s mother was there to answer for her. Mrs. Jean ran towards the couple screaming, “Yes” while hugging her future son-in-law.

Where in the World: Since Rodney grew up in the Turks and Caicos and had taken Cassandre to the group of tiny islands before, there was no question that they would exchange vows on the beach in Providenciales.

A Big Following: Rodney and Cassandre assumed they’d have a small guest list since they were planning a destination wedding. “We were blessed to have 77 people come from the States to see us get married.”

CLICK HERE TO SEE PHOTOS OF THEIR SPECIAL DAY