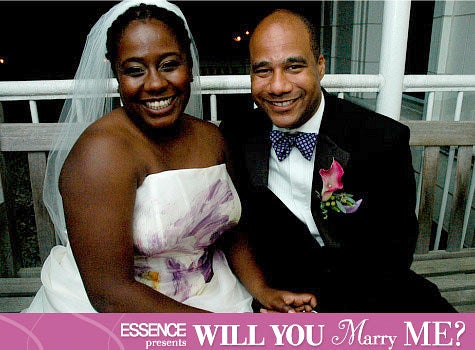 Bride: Mikayla Cuyler Marquis Groom: Oliver Marquis Hometown: San Fransisco, California, by way of Brooklyn, NY Occupations: Mikayla–Administrator for Live Oak School; Oliver–Marketing Research Director for Univision San Francisco Wedding Date: September 12, 2009 Wedding Location: The Boathouse at Prospect Park, Brooklyn, NY Not Too Late For Mikayla and Oliver’s first date, the pair went to the movies to watch “The Royal Tenenbaums.” Oliver was a little less than pleased that Mikayla was late. But something must have pulled him back to her because he called Mikayla up to hang out again. Talk the Talk “We used to have conversations about marriage and then we had a conversation and it was just different from all the other ones we’d had,” Mikayla says of her and Oliver’s decision to marry. “In my mind, it’s super romantic, but it wasn’t the traditional proposal with ‘Will you marry me?‘ and all that.” Frequent Flyer Mikayla found the designer for her elegant wedding gown online. With only five retailers that carry the line, she had to chase her dress down. She flew to New York to check it out, only to find that the retailer had shipped it to Chicago. Luckily, they were able to send the gown to Southern California and the bride-to-be drove down from SF to try it on. It was worth the extra mileage. “When I saw this dress I was like that’s a wedding dress. It’s almost like a costume,” Mikaya said of her unique silk gown with a hand painted lavender-colored flower in front. Homeward Bound Mikayla and Oliver chose to return east where their families and friends were for their big day. They chose the Boathouse at Prospect Park because of its close proximity to Mikayla’s childhood home. “It was really close to where I grew up, so, being in this place that I’m so familiar with, had some sort of semblance to this huge transition in my life,” Mikayla reflects. The Good Wife Mikayla who loves Oliver for his loyalty and his honesty, knows why her beloved chose to be with her forever. “Because I’m awesome!” The newlywed jokes. But in all seriousness–“I’m really good to him,” she notes. View photos of Mikayla and Oliver’s parkside nuptials. Find out what ideas our Will You Marry Me? couples have for their weddings. If you or someone you know would like to be the subject of a future Bridal Bliss feature, write to us at relationships@ESSENCE-online.com and tell us your love story. Be sure to include a photo of you and your new husband. Read More:
Loading the player...