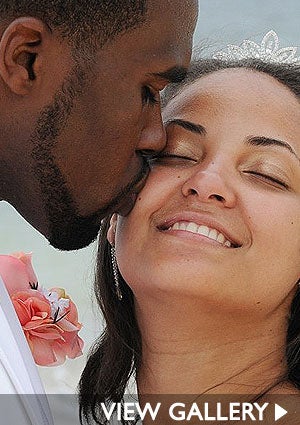 School Daze:
Teresa met Marcus at the University of Kentucky, where they both went to school. They would always chat in the student center in groups of friends. One day during the summer, Marcus caught Teresa alone. Instead of asking her out right then and there, he waited until he got home to send her an e-mail on Facebook to ask for her phone number.

Stronger:
Marcus ruptured his patella during football season one year. Teresa pitched in by going to his apartment every day to make sure he could get dressed and get to class on time. “Trying to get him to his classes and me to my classes was hard, but it was probably harder for him than it was for me,” Teresa says. “We became really close because of that.”

PF Proposal:
Marcus proposed to Teresa at her favorite restaurant, PF Chang’s. He read her a poem and choked up on the words, “from this day forward.” That’s when the waiter came out with the ring on a plate with two fortune cookies.

Just For Now:
Teresa jokes that the first engagement ring that Marcus gave her was cute.

“When he gave it to me, he said, ‘well if I got anything bigger I wouldn’t be able to afford dinner tonight.’ It was cute but a couple stones were falling out. We got another one at Zales a few months later,” she says.

Love is the Reason:
Teresa says she loves that she can feel comfortable with Marcus. “I love the way he embraced me. He just accepted me for who I was.”

Marcus says Teresa’s the total package. “She’s down to earth, she’s smart, she’s funny, she does cute things all the time and she’s such a caring person.”

Take a look at this new team’s winning wedding photos.