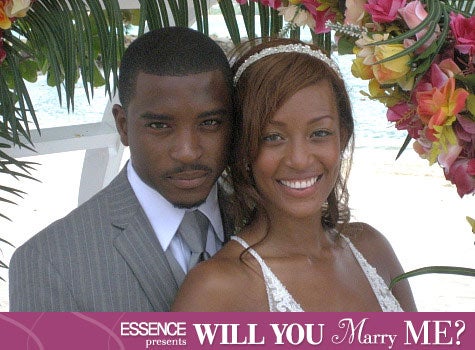 Bride: Kamaria Horne Groom: Ricky Horne Occupations: Kamaria–actress, model; Ricky–actor, teacher, coach Hometown: Burbank, California Wedding Location: Sandals Grande St. Lucian Spa and Beach Resort in St. Lucia Wedding Date: April 20, 2007 Mall Rats: Kamaria met Ricky in the mall. He spotted her walking with her mother, younger sister and then-9-year-old son and snuck up on her. When she realized she was being followed, Kamaria turned around and flashed her winning smile and he was the one taken by surprised. When they started spending time together, Ricky was 22 and Kamaria was 28. She had her guard up, thinking he was too young and couldn’t give her what she needed, but he proved her wrong and won her heart, by being kind and spending quality time with her and her autistic son. Age Ain’t Nothin’ But A Number: She Said: “I was 28 and thought no way am I dating a 22-year-old. He was persistent and he was serious enough about me to put forth an effort to get himself together. He took the time to get to know my son. That meant the world to me because I’m so protective over my son. He’d come to my house and walk my dog. He really wanted to get to know me and my family. He’d drive out to my house and just spend time with us. I was like ‘Oh my gosh! This kid is driving me crazy, making me fall for him!’ I gave him a chance to really be my friend and we had so much fun. My feelings just started getting deeper and deeper.” He Said: “We went a couple of stretches where she would just disappear and we would stop talking and seeing each other for about two months. I would adhere to it for a while, but there was always something that pulled me back. I saw through the wall and the smokescreens she was trying to put up. I saw through her actions, past the words. Even though I’m younger, I think she had to mature more in the relationship, because I was already comfortable.” Make It Last Forever: Kamaria made a point to renew her spirituality before considering marriage with Ricky. Once she had done that, she told him “I know now that I am in love with you like you’re in love with me,” and the two decided that they would tie the knot. Life After Marriage: She Said: “I definitely felt different because it was like now we’re on an equal playing field. I was really his wife now and I needed to be a great wife for him. I never played that role before. I was always the guy. When I got married, I automatically felt like I was not wearing the pants anymore. We totally support each other and I’m a total housewife when I’m not auditioning now and I love it!” He Said: “Having kids and a wife puts a nice frame around the rest of life,” Ricky says. “It makes the reasons why you’re going through certain things clear and there are less questions about life. It makes me value my time. It makes everything simpler for me now that I have a relationship that I’m building on. I enjoy the solidity of it.” Check out Kamaria and Ricky’s easy, breezy island nuptials. Would you like your wedding to be featured on ESSENCE.com? If you’ve recently been married and want to be featured in Bridal Bliss, send an e-mail to relationships@essence-online.com with a photo from your wedding and a note telling us about yourself and your new spouse.

This Couple Couldn't Find Black-Owned Restaurants So They La...

Biggie Smalls Fans Will Be Able To License A Freestyle From ...