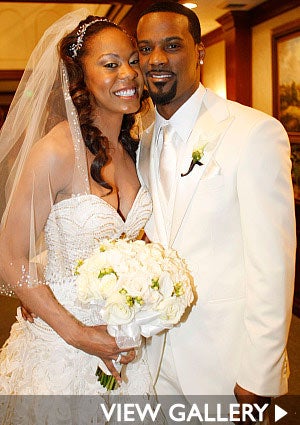 Bride: Sanya Richards Groom: Aaron Ross Wedding Date: February 26, 2010 Wedding Location: Hyde Park Baptist Church, Austin Texas & Four Seasons, Austin, Texas Go for the Gold: You might say that when Olympic Gold Medalist Sanya Richards sees something she wants, she runs after it. So she didn’t play coy when she saw then-college freshman Aaron Ross strolling the University of Texas student union during the beginning of the school year. She called the now NY Giants cornerback over for a chat. The two athletes hit it off from the start. “It all came naturally,” Ross says of his romance with Richards. “Both of us fell in love at once. We spent pretty much every moment with one another after that.” Dynamic Duo Both Sanya and Aaron agree that they’ve benefited from dating fellow athletes who understand their regimens and routines and highs and lows. “I was injured this whole season,” Aaron says, “Sanya knew exactly what to say to pick my spirits up.” “When he tells me his goals, I totally understand,” Sanya explains. “It’s great to have some one you care about that much understand how much you love your sport. I can’t imagine dating someone that wasn’t into sports.” You’re On the Air Sanya always wanted her marriage proposal to be videotaped so she could always watch the memorable moment. So, Aaron decided to pop the question while NBC was filming the young track champion on December 16, 2007, in her and Ross’ New York home for the upcoming Olympics. “He asked me, ‘what do you want for Christmas?'” Sanya remembers. I said, ‘you know what I want. I want to get married,’ and he said well you can just continue to wear your [promise] ring.’ and I said, ‘no.’ Then he got down on one knee and said, “how about this one instead?” Diamond Studded  Aaron presented Sanya with a 10-karat, princess cut engagement ring fit for a queen. The ring boasts a five-karat center stone and five karats of smaller cuts that trace the band. The new wife added five more karats to her left hand with her wedding ring. Ross’s platinum band also sports seven karats with princess cut diamonds and baguettes all around. That’s 22 karats between the two of them. How’s that for bridal bling? Call in the Experts Sanya says marriage counseling with their pastor was invaluable to her and Aaron’s preparation for wedded bliss. “It confirmed for the both of us that we knew we were doing the right thing and put us at ease and at peace with our decision,” she says. Share their love. Read More: