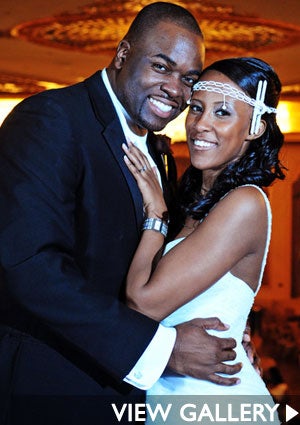 Let’s Wait Awhile: Saba met Egwu at Andrews University in Berrien Springs, Michigan in 2005, during the college’s Alumni Weekend. Egwu was a visiting alum and Saba was still a student. The two became fast friends and by the time Egwu went back to D.C. they were talking on the phone and online often. They chatted for a year before deciding to take it up a notch and become a couple.

“After the first time we spoke, I just noticed I was talking to her every chance I got,” Egwu remembered of his conversations with Saba.

Two of a Kind: Saba’s parents are from Rwanda and Egwu’s folks are from Nigeria. She said it was nice to be in a relationship with another outsider, someone who could understand “the complexities of being an African in America, yet not being African enough for Africans.”

More than Friends: It’s always scary to go from friendship to [romance]. I wasn’t sure that it was worth losing [the friendship] at first,” Saba said of becoming Egwu’s girlfriend. “But we had such a transparent relationship and we were so close.” Before they made it official the two friends would make jokes about being together. “A year or so later, we weren’t joking any more,” she laughed.

He Said, She Said:

He Said: “Long distance is strong when there’s an end date in mind…” Egwu said. “There has to e a time period where both parties know they’ll be together.”
She Said: Saba said that while she missed Egwu a lot, being apart allowed them both to handle their business. “It was good and it was bad. He started his MBA in 2007, so he was really busy and it kind of gave me the flexibility to do whatever I wanted professionally.”

Puttin’ On the Ritz: Saba was working in New York and Egwu was in D.C. He snuck into the Big Apple and pulled out all the stops to win his lady’s hand. He enlisted the help of Saba’s general manager Lesley, who made her rush downtown for something important. Egwu was waiting for her at the heliport. The couple got engaged as they flew by New York City’s skyscrapers and then had a picnic in Central Park and caught the Lion King on Broadway.

Brides Burdens: Saba had her share of stresses while getting prepared for the big day. She and Egwu began planning for a wedding in St. Thomas but had to change it to her hometown in Michigan when she caught sight of her mother’s guest list (the couple had 400 guests). She went through two wedding planners before enlisting some family friends and she had to cancel her original reception site at the last minute when she found out it would be under construction on her wedding date.

Personal Touch: Saba personally takes us through her special day from make up mishaps to happily-ever-after. View Saba and Egwu’s wedding day.
Loading the player...

This 9-Year-Old Beautypreneur Turned Bullying Into A Business

Is Retinol Good For Skin? The Experts Explain