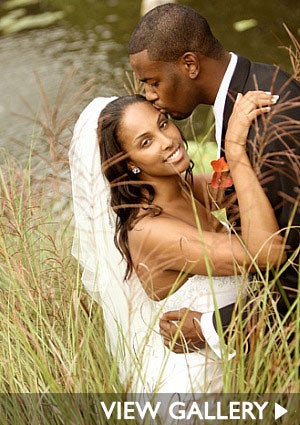 Bride: Alexandria Sanders, 25 Groom: Chad Lawrence Yates, 28 Occupations: Sanders: Wardrobe Stylist and Fashion blogger; Yates: Forward in the Big V Australian Basketball League for FIBA Oceania Hometown: Atlanta, Georgia Wedding Location: Glendalough Manor Tyrone, Georgia Wedding Date: September 12, 2009 Call me: Chad first lay eyes on Alexandria at a party at Georgetown University, where his bride-to-be was a college freshman. He and some friends drove up to D.C. from Baltimore where he attended school at Coppin State University. Their schedules and the distance between them kept these two apart for two months. Looking back, Alexandria prefers that she got to know Chad during long talks on the phone. “For the next two months we talked on the phone for like eight hours-a-day,” Alexandria remembers. “It was sort of like we were in a semi-long-distance relationship. It was just so easy for us to talk to each other. We both wanted the same things and it was nice to meet someone who I clicked with so easily.” Come together Chad, who graduated two years before Alexandria, moved back to his hometown of NYC to play in the American Basketball Association. When Alex completed her studies, she and her future husband decided to head south to Atlanta. Since Alexandria is from Los Angeles and Chad is from New York, the couple decided to throw a big Fourth of July housewarming barbecue bash inviting their friends and family from both coasts. Little did Alexandria know, it would also be their engagement party. The new wife tells the story: “I guess he’d been planning to propose to me for a while. I was just sending out invitations as if it’s a Fourth of July barbecue party. About two months before the party, he told me he’s going to New York for a week. He was really flying to L.A. to see my dad to ask him to propose. They spent four or five days together. He showed my dad and my brothers the ring and they broke out cigars and had a toast. “On the day of our party, there were balloons and champagne. It was a hot day so we all went down to the basement. We thanked everyone for coming and then he said, ‘I just want to thank one special person.’ He said, ‘You’re so important to me and you mean the world to me and I just have one question to ask you.’ Then he got down on one knee and asked me to marry him.” Keeping long-distance love alive: When Chad moved to New York, Alexandria created a schedule that allowed her to travel up north to visit her love often. She says Chad saw how much she loved when he realized how far she’d go to be by his side.  “It was the time that I spent traveling to him that really showed him the way that I felt about him, more than just saying that I love him.” Read More: