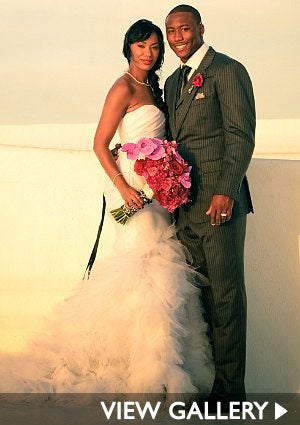 Bride: Michi Nogami Groom: Brandon Marshall Occupations: Michi — Future Ph.D student, Brandon — Miami Dolphins Wide Receiver Hometown: Miami, Florida Wedding Location: Art Deco Paris Theatre, Miami, FL Wedding Day: July 17, 2010 Student Life  Michi and Brandon both attended the University of Central Florida. She was the bookworm and he was the jock. Brandon describes Michi as a “sexy nerd.” “She was always jumping from building to building and she always had a book with her. She was gorgeous and she just seemed so focused and in tune with her goals.” Brandon approached Michi in front of the student union at UCF and the two started hanging out as friends. Things eventually progressed into a romance, and they dated for a semester but things didn’t work out. Looking back they both admit that they always kept each other in their minds. Fast Forward  Two years later, Michi was getting her nails done with a mutual friend of theirs who said, “Brandon still asks about you all the time.” They called him up and Michi and Brandon have been together ever since. So Spontaneous Michi says she and Brandon like to fly by the seat of their pants. To be closer to Brandon, she took a leave of absence from her job as a forensic behavioral specialist and moved to Denver, where he played for the Broncos. The young, beautiful and fabulous couple was engaged months later, during Brandon’s first Pro Bowl season. Brandon invited Michi, her mother and her grandmother out to dinner with his family. He stood up to make a toast, thanked everyone individually for their support and then turned to Michi, bent down on one knee and asked her to marry him. Love at First Sight Brandon says when he saw Michi for the first time, he turned to his friend and said, “She’s going to be my wife.” Michi says, “He had me at ‘hello.'” Michi and Brandon tied the knot in a gorgeous rocker-chic style wedding in Miami, Florida. Share their love.