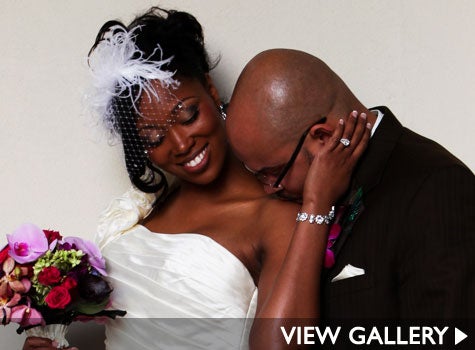 Office Romance
When Charis started a new job at Nextel in 2005, she wasn’t looking for romance. In fact, she was coming to terms with the fact that her current, long-term, long-distance relationship wasn’t going anywhere. Still, she had noticed one gentleman at the office strolling by her desk and smiling at her in the hallway. One night at a company get-together, he approached her. Keon was funny and easy to talk to, but she didn’t think they would go past being friends. He had other plans. At the end of the night, Keon turned to one of his friends and said, “I’m going to get her.”

Charis and Keon’s friendship grew naturally over long phone conversations, friendly text messages and platonic hangouts. While neither of them crossed the line, they both felt something there.

“I would visit his house a lot and I realized that I could tell him all my secrets,” Charis says. “He didn’t pass any judgements. I was so used to putting on a tap and dance show for this other guy.”

Charis agreed to go out as friends with Keon on Valentine’s Day in 2006.

“We went o this nice restaurant and had a nice meal and that was that,” she explains. “At that moment I realized this is what I really want.”

And the two jumped in head first.

Time to Grow
This love story has a twist. After more than a year of dating, moving in together and purchasing a condo together, Charis decided she didn’t want to be in the relationship.

“After I while I was like, ‘This is boring. There’s no drama. What’s going on?” Charis remembers. “I picked up, moved out and got my own place, but he was always there in the background.”

Keon says he knew Charis just needed some time to grow and he knew that she was the one. So he didn’t give up. He helped her move into her new place, would check up on her often and always let her know he was there for her.

“She constantly pushed me away, but I still felt like we were meant to be together,” Keon confesses. “I felt like I was brought into her life for a reason even if we just became good friends.”

After a year-long break, “I came to my senses,” Charis says. One day she approached Keon and said she knew what she wanted and what she wanted was him. The two moved back in together a few weeks later.

“It was like we had not skipped a beat,” Charis gushes. “Since then it’s been on and popping.”

“That year that we split made us who we are today,” Keon adds. “From that day on it has been phenomenal.”

Vision of Love
Before Charis met Keon her idea of how a man should treat a woman was clouded. Keon cleared things up a bit by always treating her with love and respect.

“I met Keon and he showed me how a woman is supposed to be treated,” Charis says. “Helped me discover my self worth and it changed my vision.”

A Bed of Roses
Charis came home from work to find her boyfriend and a bouquet of red roses. The flowers were a sweet gesture, but not completely out of the ordinary for Keon, who often found ways to make her feel special. Next to the bouquet was a gift bag that contained a book for lovers called “The Love Dare” that she’d wanted to read with him. The book was leather bound and when she turned it over she read the words, “Will You Marry Me?” that were embossed in the back.

Excited, Charis looked around for a ring. Keon directed her to the roses. The ring was sitting inside the center flower of the bouquet.


The two vowed to always love and respect each other in a grand affair at Newport Virginia’s Chrysler Museum of Art. Share their love.