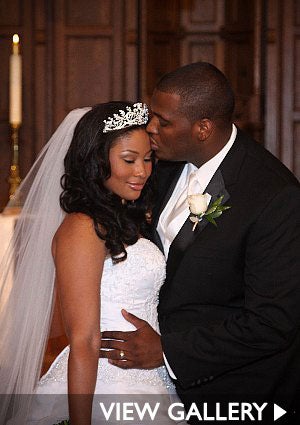 Bride: Anansa Sims, 25 Groom: David Patterson, 27 Occupations: Anansa — plus-size model; David — State Farm Insurance Agent and Entrepreneur in Upland, California Wedding Location: Ceremony — First Congregational Church, Columbus Ohio; Reception — The Columbus Anathaeum, Columbus, Ohio Wedding Date: July 10, 2010 Never Too Much When former footballer David Patterson spotted Beverly Johnson’s model daughter Anansa Sims at a Memorial Day party in Atlanta, he had to muster up the courage to walk over and talk to her. When he did, he walked up behind her and said, “I’ve been standing over there for 10 minutes working up the nerve to come over here and talk to you.” That’s right, he was honest from the start. It worked. The two hit it off and chatted all night until someone working at the venue alerted them that the party had ended. David didn’t care if he came off too eager. He asked Anansa out for a date the very next day. “I think we went out on our first five dates that week,” Anansa remembers. “After that we were just inseparable. From that moment on, we just had an instant connection. We both had the same core values and we had so much in common. Movie Romance Anansa says she and David both realized they were in love around the same time and early on in their relationship, but she did not want to be the first one to say it. “I would just express to him the way I was feeling. I would say ‘I have this overwhelming feeling in my chest.’ He would say, ‘You have that? I have it too?’ One night while she and David were at the movies, he couldn’t hold in his feelings any more. He turned to her and said, “I’m in love with you.” So ready to say it back, Anansa confirmed that she was indeed in love with David too. Surprise, Surprise! Anansa admits that she is a nosy person. She thought that when David was ready to propose she’d know simply because he couldn’t get anything past her. But David managed to give Anansa the surprise of her life when after a night out for dinner, drinks and karaoke, he proposed. “After we left the Karaoke bar, he took me to this really beautiful park, then he said, ‘Come with me here under the light.’ I was like, ‘Why?’ Something told me not to complain and just to go with it. By the time I turned around he was down on one knee. He asked me to marry him and I started laughing because I was so surprised. Then my laughing went to crying and he was still down on his knee. He said, ‘Well, what’s your answer?’ I said, ‘Yes!’ I couldn’t believe that he really surprised me. I never thought I would be the girl to be surprised.” Two years after Anansa and David first locked eyes, the two tied the knot in a wedding fit for a princess and her prince charming. Share their love.
Loading the player...