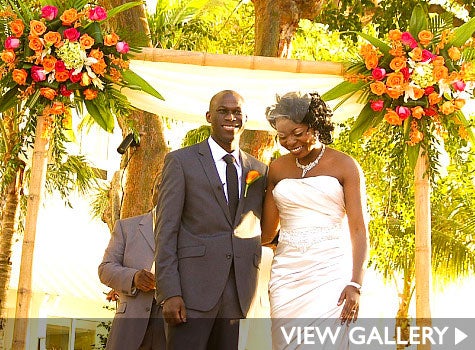 Bride: Abi Ishola, 28 Groom: Kunle Ayodeji, 32 Occupations: Ishola: Segment Producer for CUNY TV; Ayodeji: Marketing Manager Hometown: Brooklyn, NY Wedding Location: Hilton, Ft. Lauderdale Marina in Ft. Lauderdale, FL Wedding Day: March 27, 2010 ‘Don’t I Know You from Somewhere?’ Abi Ishola met Kunle Ayodeji on the lively dance floor of a Nigerian party on one of those steamy August nights in Brooklyn that seems to broil lovers together. Before she even stepped outside of her door, Abi said, “I’m going to meet my husband tonight.” When she spotted Kunle, Abi, who is normally more reserved, sauntered over to her future groom and said, “Don’t I know you from somewhere?” Embarrassed by her pickup line, she tried to make a dash for it, but Kunle pulled her back and said, “No, but let’s get to know each other.” That was almost seven years ago. Abi was 21 and had never been in love. “Kunle was my first love,” Abi, now a 28-year-old wife and TV producer, says. “He’s seen me grow and he’s the man that I’ve had lots of different experiences with. We’ve literally been together through thick and thin and he’s always been there for me. He’s proven that he’s just the best man for me.” Can You Stand the Rain? Two years after they started dating, Abi’s father passed away. Abi says that during that time she was devastated over the loss of her dad and thought her relationship wouldn’t last through her depression. “It caused some friction in our relationship. It was hard because I was going through a depression and I would get really moody. We had to reevaluate our relationship to decide if this was what we both wanted. Kunle really saw me through that.” Share My Life Kunle proposed to Abi during a trip to visit his girlfriend’s family in South Florida. A full moon brought a new kind of light to Miami Beach as the couple relaxed on the boardwalk on Ocean Drive. “I had my head on his shoulder and he was talking about our future. Then he said “I really want to spend the rest of my life with you,” then he got down on one knee. I didn’t cry because I was so shocked that he surprised me. As people passed by, I kept saying, “We just got engaged!” Abi and Kunle got hitched in a beautiful spring wedding on the Ft. Lauderdale Marina, blending their Nigerian culture with traditional Western wedding fashion. Watch this video from their big day and then, Share their love.