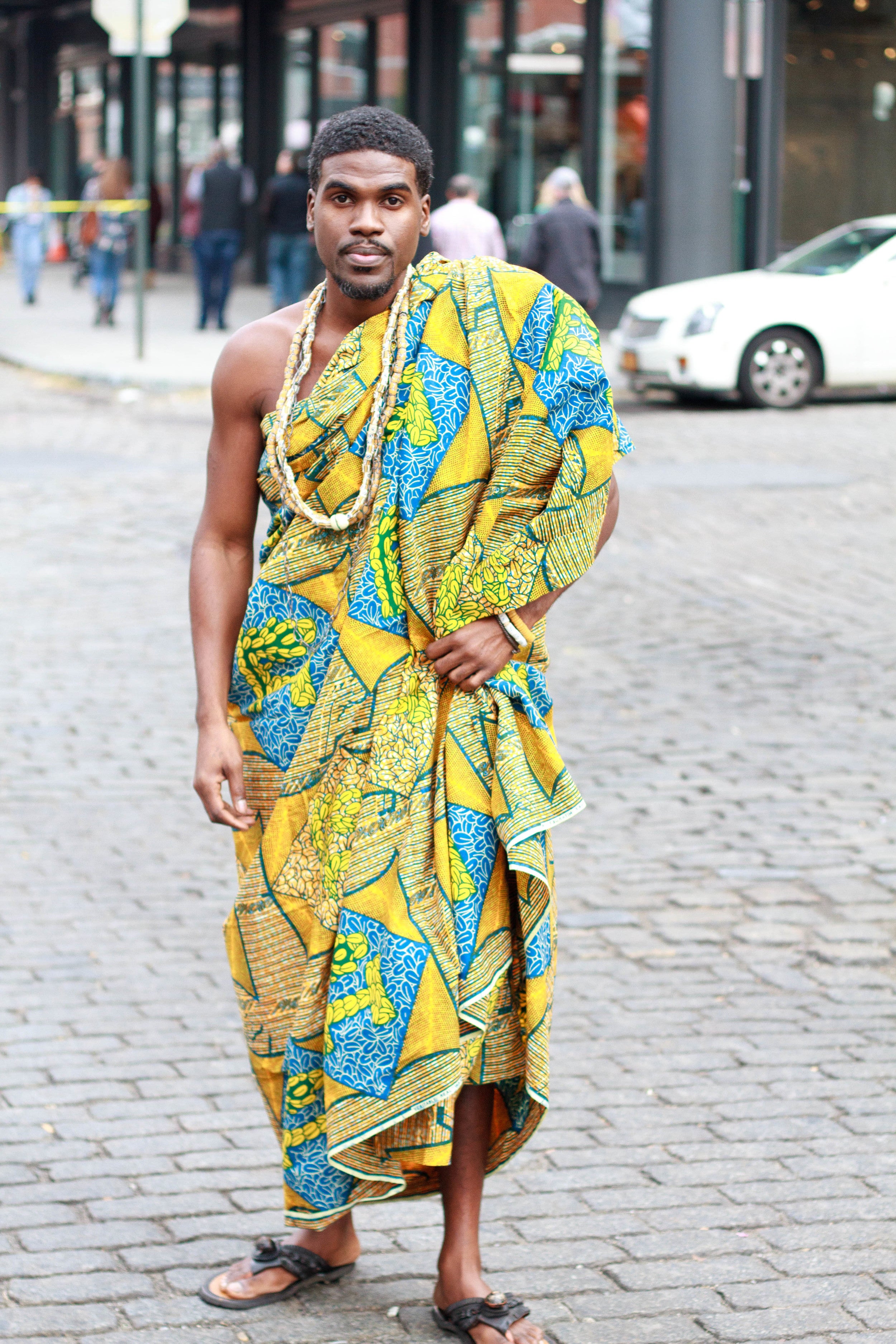 Well ladies, he’s finally found the woman of his dreams, and the newlyweds have ESSENCE to thank for that.

Nana Kwame first made waves on social media as the hunky entrepreneur walking the streets of New York City in traditional Ghanaian garb. Tons of virtual admirers flooded Nana Kwame’s inbox to shoot their shot, but only one woman was destined to steal his heart: a London-based accountant named Nafatarie who lived over 3,000 miles away.

🌺🌺Greetings MARCH 2019.🌺🌺 . I OFFICIALLY SAID, "YES!!". WE OFFICIALLY SAID, "I DO!!"💍🤴🏿👸🏾🥳 It would be over three years ago, to which two delicate, ambitious souls, from a long ocean distance apart unexpectedly caught one another's attention in 2016. It was over three years ago, an infinite divine territory of a warrior spirit-to-spirit connection was enchanted together by the Almighty, by the universe and by the ancestors, a situation, a love journey most people we know have been calling a true love story. From when I first set my eyes on on his well known "African Bae" photography image, I re-posted a message expressing my respect and admiration for an African King to honourably and confidently represent his roots, culture and entrepreneurial mindset, especially within the period where sadded ethnic events were happening within the USA and UK, amongst our men. The image that caught my attention, had swept the internet in 2016 and went viral (thank you to @jcasimir3 for photo in Manhattan, NY), thank you to (@demetriallucas) whom brought to my attention my soulmate on an interview and article with Essence magazine, (@essence ), and thanks to @rasta_empress99 For bringing to my attention Kwames name and FB, before I found it). For those whom dont know our story, I can summarise be short, it feels as though we have definitely known each other from a past life to say the least. In any matter, after long anticipation and growth, …today, I can quite humbly announce that our souls' have been OFFICIALLY, re-united, ignited, bond and joined together as Husband and Wife!, as Okunko and Y3r3, as Abal' eni' Amis (Negas and Negis)!! I guess the father heard my call and Insta post which said, "fatherbringhimtome", as we now look forward to sitting on our thrones in 2020 and continuing under the Almights works. @africanbae @purplemossparadise #blacklove #love #melanin #blackexcellence #blackgirlmagic #blackpower #blackwomen #blackisbeautiful #black @theshaderoomteens

After coming across news that our beloved “African Bae” had fallen in love thanks to his feature on ESSENCE.com, we reached out to Nana Kwame and his new wife Nafatarie about their romance. If this doesn’t make you believe in true love, we don’t know what will.

Nafatarie told us that her admiration of her future husband went more than skin deep. “After reviewing his page (as we ladies do), I came across his ESSENCE interview,” she says. “I was attracted to his strong focus as an entrepreneur with his business Purple Moss Paradise, especially coming from a business background myself.” Kwame had been getting loads of attention from his viral moment, but there was something about Nafatarie that stood out from the pack. “The main things that stood out when Naf reached out to me was her intelligence, level of confidence and nurturing spirit. She seemed to be the woman I was waiting to attract,” Kwame told ESSENCE exclusively. “She offered to use her skills as an accountant to help me with my business and that was amazing because I immediately saw that she would be a perfect balance for me even [professionally.] No one else even came close after that.” After initiating conversations online and via phone, Nana Kwame flew to London to meet Nafatarie for their first date. “We had such beautiful conversation and bonded so well that we completely didn’t realize that the restaurant was closing,” she remembers. “It literally felt like we knew each other in a past life.” 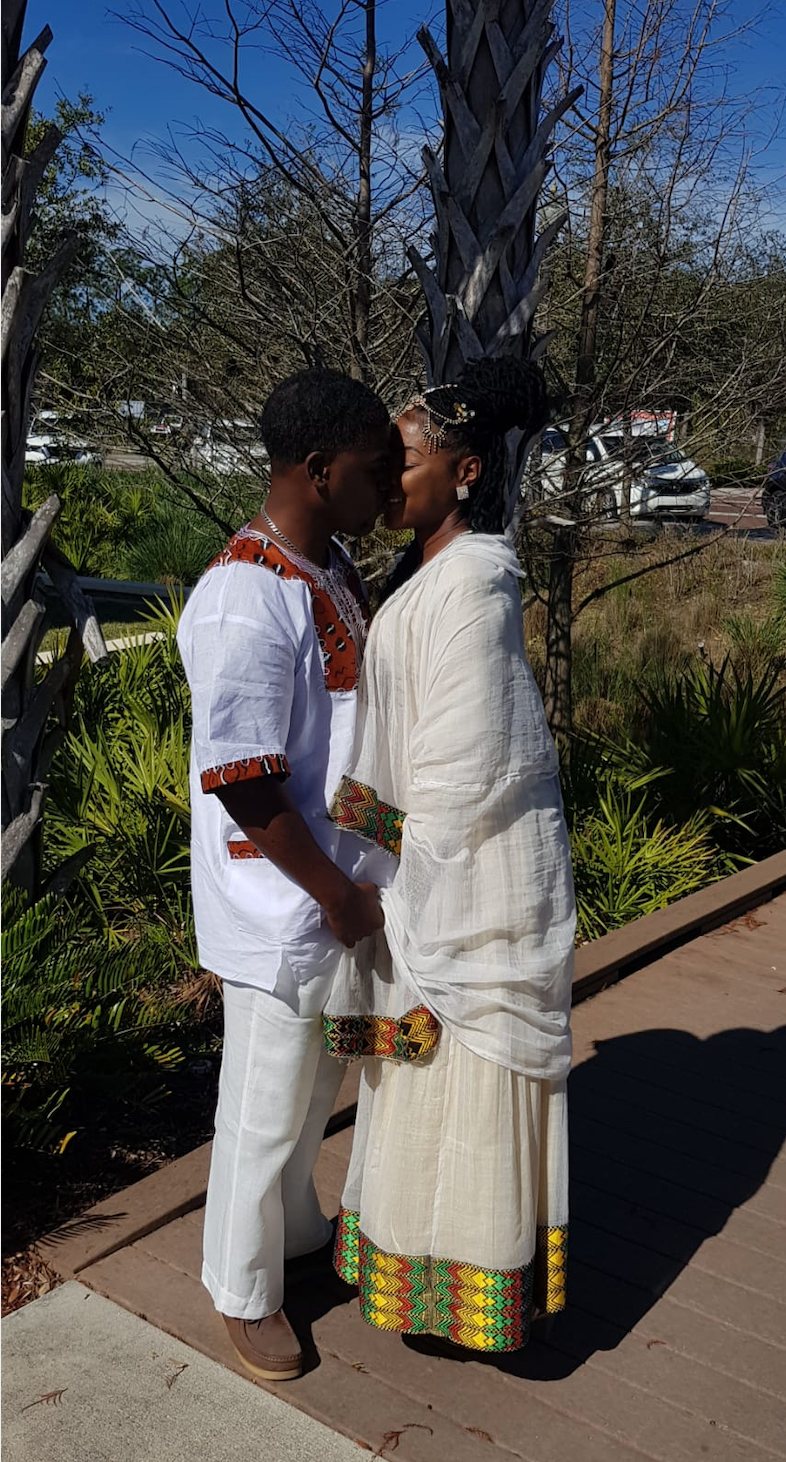 “Naf is SUPER down to earth and has a genuine love for her culture and people,” Kwame says of his wife, who is of Jamaican and Guyanese decent. “As a result of that grounding her virtue stood out. It isn’t easy to trust someone that lives 3,459 miles from you in a relationship, but she made it easy because of her nature as a true Empress.” Kwame and Nafatarie maintained a long distance relationship for three long years. Separated by two different times zones, Kwame decided it was time to take their relationship to the next step. “I proposed at a family event,” Kwame says. “She didn’t think I would be present because I made her think I had to work. I surprised her with a ring I had hand crafted with Adrinka symbols while i was in Ghana. She was completely surprised, and the tears started flowing from her eyes. It was one of the most beautiful moments of my life.” Nana Kwame and Nafatarie recently wed in a beautiful City Hall ceremony and are living in Florida. “We are planning our spiritual union thoroughly for the near future and the Essence family is certainly invited as our guests of honour,” Nafatarie reveals.”This magazine played a major role in us uniting and being one.” P.S. – Kwame and Nafatarie are now partners in love and in business. Their company, Purple Moss Paradise, infuses Purple sea moss and shea butter for the ultimate skincare treat. They are in the midst of planning their official launch.