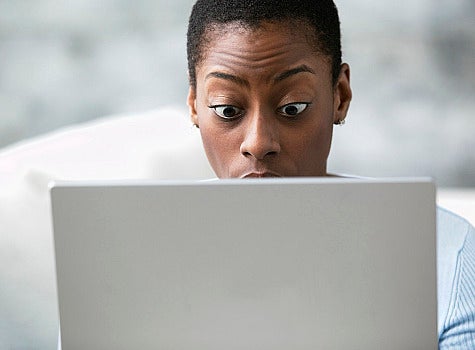 About two weeks before my Match.com subscription was due to expire, I got a funny note from Cory*, a blues guitarist in Washington Heights. Sardonic and nerdy, we exchanged long sprawling messages about everything under the sun before deciding to meet. On date night, Cory showed up dressed as a hip undertaker, decked out in all black. Online he had the face of John Corbett, but in person he actually bore a striking resemblance to Rainn Wilson from “The Office.” After some prodding and fact-checking, I discovered that he lied about his age. He claimed he was 37, but was 44. He said it was a simple error on his part that he just never got around to correcting, but I chalked it up as him trying to align himself with younger women. It’s not uncommon, but it’s slightly unnerving. Our second date was to see Peter Sellers’ “Othello.” Two hours into the four and a half hour play, I started to fidget and he slid his hand into mine. During dinner, I decided that this was more than likely our last date. I found him to be engaging enough, but there were some idiosyncrasies I couldn’t really reconcile. I also had no interest in seeing him naked. Finally, there was the age thing. Being 44 is not a big deal, but lying about it is. We shared a cab and casually disappeared out of each other’s orbit.   Nearly six months after that last date, I got a phone call from an unrecognizable number. I was met by a woman’s shaky voice on the other end. “I-is this Zulekha?” Once I confirmed, she informed me that she was Cory’s girlfriend and was living with him at the time that we were dating. She intended to confront him about his extracurricular activity when he got home from work, but needed to know everything that happened between us so she could trip him up. I told her that “dating” was strong and gave her the highlights on our two dates. She’d started crying at this point, remarking that after reading our emails, our rapport reminded her of how it was when they first started dating. “It wasn’t always this bad; we used to have such a passionate relationship but after we started living together, everything changed.” She was wailing hysterically at that point, and out of empathy I started to console her on the phone. I told her my version of a St. Olaf story, about finding out about an ex’s online exploits and dumping him. Halfway through my tale, I paused, suddenly struck with the ridiculousness of the situation. I was curled up on my couch literally in storytelling mode with the girlfriend of a guy I went out with innocently but illicitly. “So what happened?” she asked. She had calmed down, now engrossed in the story. I did what any storyteller does; I finished the story. I got off the phone and I knew I was done with online dating. While I certainly don’t knock it and am overjoyed for those of you who meet someone special in cyberland, I’ll take my chances out there in the physical world. At the end of the day, I’m an old-fashioned girl who’s never too busy for romance. * Name has been changed.