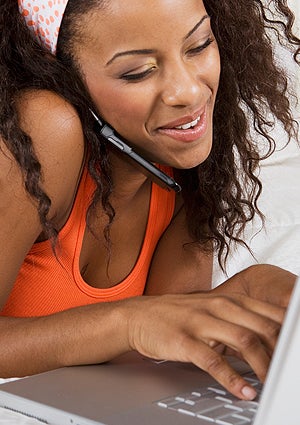 After ending her second long-term relationship in New York City, celebrity hairstylist Tippi Shorter, decided to try something new and take a chance at finding love online. She fell in love with — and married — a hopeless romantic from Kansas City, Missouri, whom she never would have met had she not decided to “think outside the bar.” ESSENCE.com asked her to share her online love story with us. ESSENCE.com: Where did you get the idea to sign up for online dating from? Tippi Shorter: I was watching “All of Us” and LisaRaye McKoy’s character was online dating. Honestly it hadn’t been something I was thinking about, but I said, that’s not a bad idea. ESSENCE.com: What made online dating attractive to you? Shorter: Being a celebrity hairstylist, I felt like in my circle either the men were in the fashion and beauty industry and were not straight or they were in the entertainment industry and not faithful. My whole thing was, I needed a regular guy who was not bothered by my lifestyle and what I do and who wanted regular things in life. That was the driving force for me to go online. ESSENCE.com: How did you feel when you initially signed up? Shorter: I was incredibly apprehensive because I’m a very private person. Also I owned my own home, I had my own car and my own business. I felt like, ‘I’m a pretty good catch. Why am I online looking for a guy?’ ESSENCE.com: Why did you choose BlackPeopleMeet.com? Shorter: I went to Match.com first. I signed up and did a little browsing. They send a couple of matches to me and just based on physical attraction, I just couldn’t do it. So, I decided to go to a Black site. I basically Googled Black online dating and BlackPeopleMeet.com was the first one that popped up. ESSENCE.com: What was your experience like? Shorter: The moment I put my photo up – it was probably the most ego-satisfying situation to come home every night to e-mails from all these different guys. For the first few months I didn’t take it seriously, because I kept thinking, “why are these guys on this site?” Once I was able to say, “they’re on the site for the same reason I am,” I was able to take it a little more seriously. ESSENCE.com: How did you find your husband? Shorter: I looked at his page and he seemed so much more intellectual and a lot less flashy than the previous suitors I had corresponded with. I’m the one who reached out to him first. We shared e-mails back and forth and within two weeks, we began talking on the phone. ESSENCE.com: How did the relationship progress? Shorter: My husband is from Kansas City, so three months after our first conversation he took a trip to New York. It was great! I felt a great sense of relief. During that trip, we didn’t talk about the logistics of him living in the Midwest and me living in New York because it was brand new. A month later, I went to Kansas City and I met his mother, his friends and his co-workers. I was in his environment and it felt wonderful to be around him. His mother sealed the deal for me. From that point on, I was like “I can’t move to Kansas City, you’ve got to move to New York.” He ended up moving to New York six months later. My husband is such a romantic; he totally changed his life for us and relocated for a chance of having a love of his own and a family. We’ll be married for four years in July and we have a three year old. ESSENCE.com: What makes online dating different from “regular” dating? Shorter: There’s not that much different. You still have to have things in common. All you have is a broader range of possibilities. Also when you’re meeting a guy in person, he sees you first. In online dating, they really don’t get to see all of you; they get to know you. What’s cool is, when they meet you, they really like you regardless of what you look like.