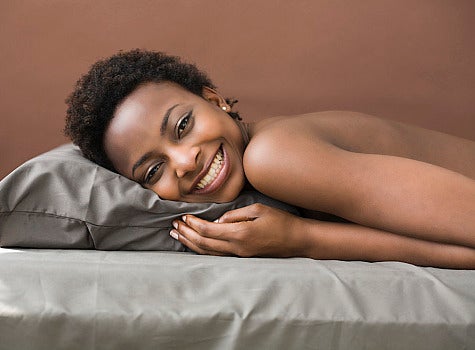 Last week’s Frisky Friday was all about getting down for our men. To even the score, we asked a few good ladies to tell us what they think about being on the receiving end of oral sex. Tell us if you feel the same way they do… What She Said: Tara: “It’s not something that I feel like only needs to be done by a special person. It’s definitely the easiest way for me to orgasm. I don’t feel like it’s something that has to happen every time I have sex, though. I don’t like getting it when I don’t feel clean down there. It’s hard for me to relax.” Sophie: “I personally don’t give a rats behind about oral sex. Usually it makes me feel bored. I think that’s probably because I’ve never had partners who were good at it. It’s hard to teach, and it’s not as easy to learn as manual stimulation. The people who have been better at doing it have always been more casual partners. I don’t always like having it done to me because I then feel obligated to go down on him in return. I think very few guys give oral sex without wanting a return on their investment.” Cynthia: “Oral sex is good as long as he knows what he’s doing. I’m not sure I’d be able to tell a guy what to do exactly, but I’d be able to tell him when he’s hitting the right spot. I would be willing to let him learn, too. It would be fun and it would make the relationship stronger. I think giving and receiving is a personal choice. Just because a guy goes down on me, it doesn’t mean that I have to return the favor. I only do that for guys I really care about. I just don’t like getting it when I’m not prepared. If I don’t feel fresh down there, I feel uncomfortable and wonder what he’s thinking.” Liz: “I love receiving oral sex. It allows me to get lost in pleasure when he’s down there. When it’s really good, I’ll even grab his head and move it the way I want. If he’s not good though, my mind just wanders and I start thinking things like, ‘did I lock the door?’ I’m not a fan of the fast tongue action. I prefer it to feel like he’s french kissing me. And he shouldn’t be afraid to use his fingers.” Kendra: “Of course I like it. It’s an important part of foreplay. As women, we don’t get off as easily as men do so we need that stimulation. I feel like it’s more intimate than regular sex, so I have to be comfortable with my partner before sending him down there. I definitely like a lot of tongue action. I don’t like it too sloppy. I like a lot of sucking and pressure. A man should just be open to what the woman wants, instead of just going down there for five seconds and coming back up. It’s definitely a vulnerable position for a woman to be in, but I think it’s crucial.” Receiving can give you just as much satisfaction as giving. Here’s some tips on how to get the most out of him going down. Problem: You’ve got that not-so-fresh feeling Solution: You should feel comfortable enough to communicate to your partner that you’re feeling a little, well, funky. Most guys really enjoy the scent of a woman, so if he tells you he doesn’t care, believe him, lay back and let him go to work. That said, If you know you really do need a shower, close up shop. You wouldn’t want him coming to you all sweaty, give him the same amount of respect. Problem: You don’t want to do it back Solution: It’s OK to be selfish with your oral sex. You shouldn’t feel pressured to go down on him because he did it to you. However, to avoid an uncomfortable situation, you should be honest with him about how you feel before he heads south of the border. Problem: He’s no good at it Solution: This is actually where things get fun in the bedroom. You get to communicate with him and tell him how to make you feel good. You don’t want to kill his confidence, so instead of telling him that he sucks, ask him to try the things that you know you like. Also, let him get creative, he might do something that you never experienced. Problem: He doesn’t play that Solution: A lot of guys don’t go down because they think they’re bad at it. Before jumping to the conclusion that he’s selfish, ask him why he’s hesitant to go low and tell him you’re willing to show him the ropes. If he just doesn’t want to do it, you really need to ask yourself if you can live a life without oral sex. If he’s not going to budge below the belt, it might be time to buckle up and bolt. If it’s not a deal breaker for you then, good for you… I guess. Problem: He’s not doing the time Solution: If your guy’s not staying down there long enough, maybe he needs more break time. Switch things up by letting him come up for air every few minutes to kiss your face and other parts of your body. When he looks rejuvenated, send him back to work. Read More: