1. ALISON STEWART has done incredible research. The former MTV veejay and reporter for NPR, NBC News, ABC News, and CBS News painstakingly reports on the triumphs of Dunbar, the historic Chocolate City high school, and puts a spotlight on the tragedy of the public education system when the school falls into decline. Stewart, who has spent more than five years researching First Class, shows the skills of a scholar with poetic touches.

2. THINK ACADEMIC MEANS BORING? The history of Dunbar is as interesting as the real lives of some of the outstanding luminaries who attended and who taught at this famed high school. Dunbar, which was established in 1870, can boast education pioneers such as Anna Julia Cooper among its faculty and graduates include Dr. Charles Drew, Benjamin O. Davis, Elizabeth Catlett, Rep. Eleanor Holmes Norton, and Carter G. Woodson. Stewart does a deep dive into the more than 140 years of bureaucratic fights that administrators waged to maintain the school’s curriculum. Sadly sometimes they lost. But not often.

3. EVERYONE IS A STAR at Dunbar High School. “The protagonist of the story is the school,” says Stewart. “The voices of the people provide witness.” It is the voices of those everyday folks—many of whom remain in the area—that separates Stewart’s book from many books in the category. 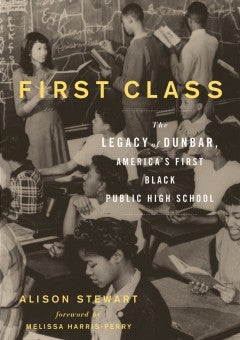 4. STEWART IS NOT AFRAID TO “GO THERE.” This is not a hagiographic treatment of Dunbar. Stewart’s narrative takes a shift as Dunbar suffers the fate of many all-black high schools beginning in the late 1960s and early 1970s and proliferated into the 1980s and 1990s. “When Dunbar moved to a new school it was broken,” says Stewart. “There was no respect for the school. The feeling from the students was, ‘If you don’t respect me, why should I respect this school?”

5. THERE IS A HAPPY ENDING IN REAL-LIFE: Dunbar High School students walked into a new $122 million building, assuring future generations would add their names to the school’s Hall of Fame. Stewart, who didn’t attend Dunbar, has taken her advance and started a First Class Scholarship with the United Negro College Fund for a Dunbar High School graduate who plans to attend college. My Grade for First Class: A. Like a course from your favorite teacher, you will want to return to get some serious knowledge again and again.