Only 30 minutes after we boarded a sparsely occupied flight, we were preparing for our initial descent, hurriedly throwing away the wrappers of crackers that were ingested just seconds before during an express in-flight drink service.

It was a cool but bright Sunday morning, and as I looked out of the window to see the approaching island — a place visited by my now-husband and I every summer since we dated — it all felt new. A day before, we hosted 160 family members and friends for a minimalist affair (the only flowers were in my understated bouquet) and we were ready for a mini-moon full of lobster rolls, salty breezes and sleep. Lots of it. 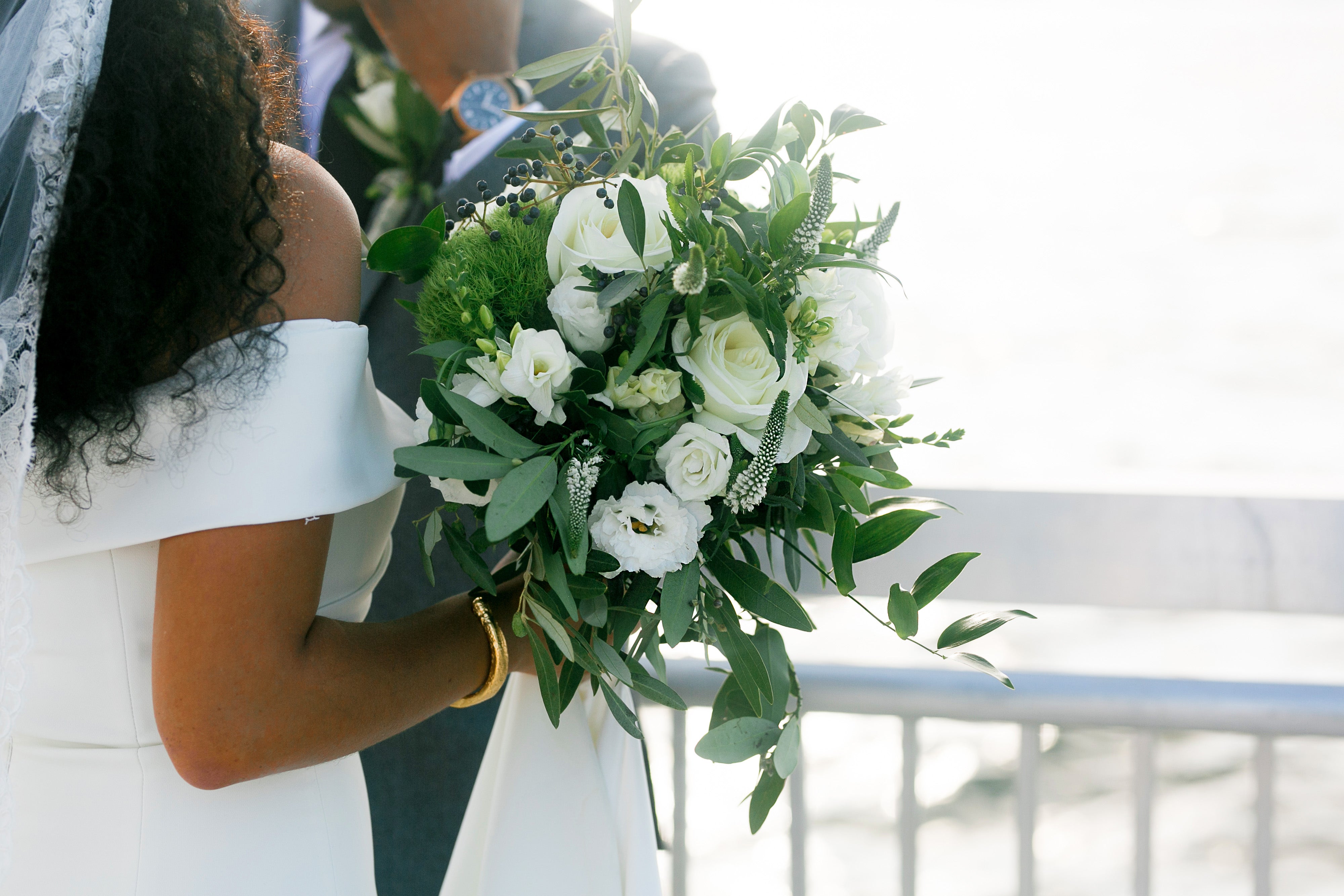 "When I proposed, I wanted to ensure I incorporated our journey as a couple. Since we met at a museum, my idea was to create a gallery/exhibit of our love," Chris said. "I rented space at MoCADA, The Museum of Contemporary African Diasporan Arts, in Clinton Hill, Brooklyn. With the help of my line brother, I took a bunch of pictures from our relationship and blew them up to full size. I put them all around the museum walls. When she walked in — she thought she was just visiting the museum with friends — she was able to see the progression of our relationship on those walls. She was shocked. Completely shocked."

When we discussed where we wanted to relax after a year of planning a wedding, Martha’s Vineyard was a no-brainer. The summer after I met my husband, he surprised me with a trip to Falmouth, where we only spent late nights in the Massachusetts town toasting s’mores and drinking wine, but the early mornings and afternoons crossing the ocean to sprawl out on the beaches on the vineyard. The quick but inconvenient ferry to the vineyard daily was a nuisance. It was decided then that staying on the island — where we’ve since made it a tradition to fish before dawn in Menemsha and soak up the rich culture at the Inkwell in Oak Bluffs — was a non-negotiable.

This time was different. It was October, off-season. Chucking the routine of packing up our coupe with fishing rods, beach chairs, groceries and our own cutting boards and knives (eating what we catch on the island is both a philosophy of our cooking and a treat), we booked two flights, packed a light carry-on of jeans, sweaters and sweatshirts and planned to stay in a hotel for the very first time ever.

It was also our first time exploring Edgartown, a stone’s throw from Oak Bluffs but an entirely different world to summer visitors like us who religiously eat lunch at Nancy’s, get countless cones of ice cream on Circuit, thrift in shops down windy roads in Vineyard Haven and nod at HBCU alumni and their families during the daily trek to the Inkwell.

Renting a black Jeep Wrangler from the first kiosk we happened upon, we clicked our seatbelts and headed toward the Edgartown Lighthouse, where we were to stay in a storied cottage of the 1891-built Harbor View Hotel. Overlooking a picturesque bay — a white lighthouse dotting the sparkling water — the Harbor View Hotel serves the charm you expect of a beachside haven, with some welcome luxury upgrades. The view alone, from the resort’s wrap-around porch filled with pastel-colored rocking chairs, is enough to keep guests coming back.

Greeted by charming bellhops with accents from Brooklyn neighborhoods, a familiar welcome for me and my NYC-bred husband, we chatted briefly about what there was to see and to do during the off-months in Martha’s Vineyard. It was then that I realized the nervousness of exploring a town we hadn’t yet vacationed, specifically how I was to be received with my proud curly ponytail in a town that, according to many yearly vineyard vacationers I knew, wasn’t historically brown. Considering the political climate — and coming off a year of covering news and politics — I wasn’t sure if my anxieties were warranted or self-generated.

I decided then that I would make it a point to do two things here in Edgartown — relax without concern of micro-aggressions and find out more about the history of Martha’s Vineyard, its unique communities and the people who live here year-round. Edgartown made it easy to do both —relieve that history itch and luxuriate in a low-key but blissful setting.

The latter wasn’t difficult to do in the Harbor View’s cottages. Staying in one of the newly renovated one-bedroom suites — with their high vaulted ceilings, outdoor shower and bedside fireplace — guests are either treated to views of the resort’s green manicured gardens (yes, even in October), or harbor views of Chappaquiddick Island. A bathroom as large as some New York City apartments held a massive tub and a spa shower. And every door opened onto an outside patio or space, meaning it was impossible not to wake up to a brilliant and shimmering sunrise every morning. 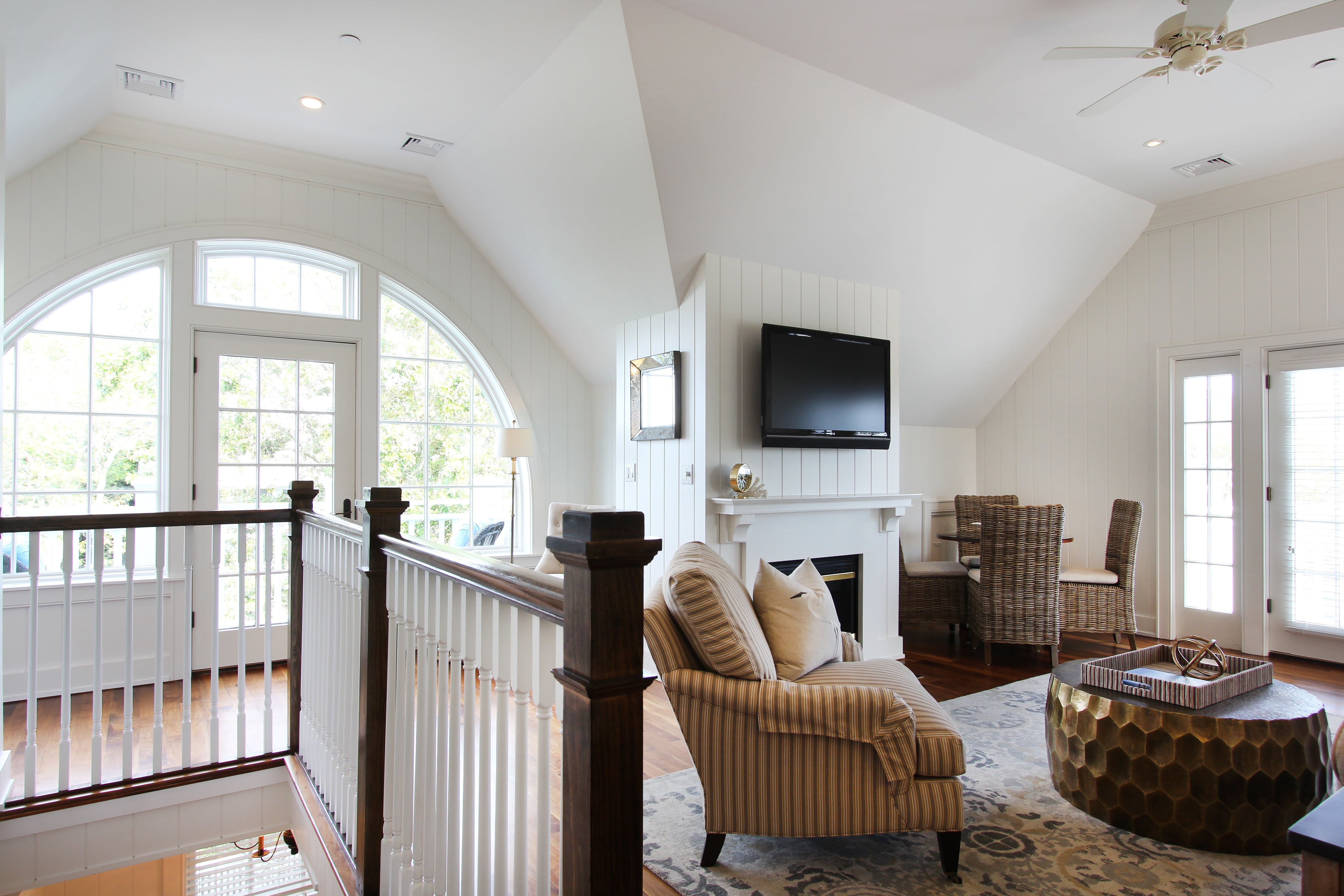 Down in the main and oldest part of the Harbor View — the Governor Mayhew building — photos of vacationers from as early as the 19th century line the walls (the locals were happy to talk about the history of this initially small hotel and its guests). An understated bar decorated with richly brown wood is tucked in the back. And the culinary jewel of the town, the Lighthouse Grill, sits with full views of the harbor and offers a seasonal menu that nods heavily towards New England-style dining.

If we wanted to, we could have easily spent the entire vacation going from our cozy cottage to the restaurant and back again. It was exactly what two tired, just-married workaholics needed.

But at the suggestion of the concierge, we went to explore Edgartown, first stopping at Edgartown Books to pick up literature about the African-American history of the island — learning about the first Africans on the island to enslaved landowner Rebecca Amos to the descendants who have made it tradition to visit the island annually — and again to sail the glittery bay with Captain Kurt on Cat Boat Charters, his famous, well-known and self-painted American Flag sail serving as a beautiful reminder that even here on this island, far from the mainland, Black people fought for the freedom of this country and now return in exodus to do the revolutionary act of continuing family traditions. Wrapped in sweaters and sipping wine, it was clear that visiting off-season didn’t have to mean sacrificing time on the water. Or ignoring your history.

Halfway through the week, we checked into the Kelly House’s Mizzen Top building, a newly renovated top-floor apartment with sweeping views of the bay’s fishing boats — only a 2-minute walk to the town’s center. Although easy to get lost in honeymoon naps in the 275-year-old hotel’s king-sized beds (easier to do when the apartment sits apart from the main building and its bustling activity) we forced ourselves to casually explore the surrounding town — watching the weigh in at the Martha’s Vineyard Striped Bass and Bluefish Derby and grabbing a late and sleepy breakfast at Among The Flowers Café. Dinner at the hotel’s 1742-built The Newes From America Pub, a warm reprieve for sailors and fishers for hoppy beers and hot chowder, elicited stories from year-round patrons and tales of haunting guests, the latter just enough to account for any thrills I needed on this mini-moon. Between that and prospect of catching a Blue when we fished off the beaches near Edgartown Lighthouse (we didn’t catch a thing), I had had my share of excitement in what was a successful, reflective and low-key mini-moon.

Taking in breathtaking grounds of Harbor View again before we boarded our plane — we visited once more to thank the concierge who suggested the sail around the bay — we bumped into a family preparing for a wedding. Thinking of what it took to get 160 guests of close family and friends in formation for our big day, I was suddenly happy we took the time to do something for ourselves — visit our favorite domestic island, forego the 4-hour flights to beaches in the Caribbean, spend modestly and relax. No putting on for the ‘gram. No flashy, expensive resorts. No explanation about what swanky honeymoon we were planning.

Ended the sweetest “minimoon” in one of our favorite spots with Mr. Mullen on the week anniversary of our nuptials. Where’s the rewind button? _______________________________________ Much thanks to @harborviewmv and @kelleyhousemv for making our first visit to Edgartown so welcoming and of course the town of Oak Bluffs for always embracing us like old friends.

Just me, the bay and my new husband in an easy, no-fuss trip that was both a nod to our relationship and our history.