“Mommy Talk” is series of interviews between ESSENCE’s own ChicBusyMom and everyday mothers doing extraordinary things. Meet Donyell Thompson, an attorney who is raising her adorable son along with her wife, Krista.

CHIC BUSY MOM: What do you both do for a living?

DONYELL THOMPSON: Krista is a Special Education Preschool Teacher. I am an Attorney.

CHIC BUSY MOM: How many children do you have?

DONYELL THOMPSON: We have one son, who is a year old. We expect to expand our family within the next year or so.

CHIC BUSY MOM: Can you share how you decided to have children (gave birth, adopted, had a surrogacy or another option)?

DONYELL THOMPSON: Both Krista and I were raised in a traditional two-parent household with siblings. When we decided to get married, we both knew that our family would include children since we both loved children and could not imagine our life without any. 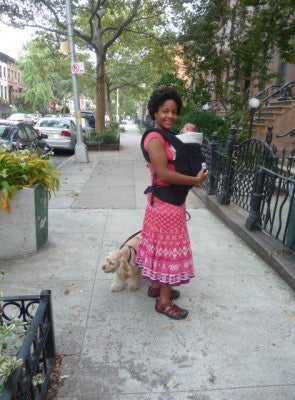 CHIC BUSY MOM: If one of you gave birth, how did you decide which one of you would carry the baby?

DONYELL THOMPSON: Both Krista and I wanted to experience pregnancy and childbirth so we both decided that we would each carry a child. Because I was 39 when we got married, the decision was quickly made that I would try to conceive first with the understanding that I would try for one year utilizing whatever medical intervention was necessary to conceive and if I was unsuccessful Krista would carry both of our children. Because of my age, we decided to seek the assistance of a fertility clinic. We both wanted to make sure that my reproductive organs were in working order prior to spending a significant amount of money on sperm to only later discover that I was unable to conceive. I underwent all of the necessary fertility tests to determine if I was able to conceive a child. Once all the tests came back affirmative, we chose a sperm donor. We decided on an anonymous donor because we did not want any legal conflicts when Krista went to adopt our child. My journey to conceive was a long and difficult journey but after 12 months I conceived our son. We intend to use the same sperm donor to conceive our next child so our kids would be biologically related to each other.

CHIC BUSY MOM: Studies show that AA males benefit from having a strong male presence in their lives. Do you plan to engage male role models in your son’s life?

DONYELL THOMPSON: There are several males that are in our son’s life that can provide him with support, guidance and answers to questions that he may not feel comfortable asking his mothers. However, none of these individuals are playing an active parenting role in our son’s life. 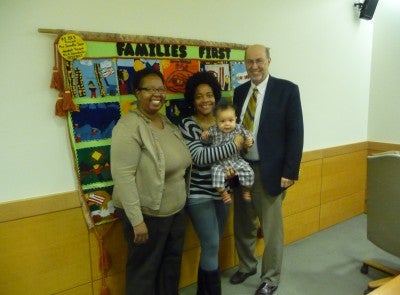 CHIC BUSY MOM: Do you feel the need to prepare your kids about how to deal with ‘family structure’ questions from their peers?

DONYELL THOMPSON: We do feel it is necessary to provide our son with the language and knowledge to respond to questions from other adults and peers about his family structure. We also feel that it is necessary to provide him with the same language and knowledge to deal with questions pertaining to his cultural identity in a white dominated society. As an African American male, we know that our son will face challenges, especially since he is being raised by two women, so it is our responsibility to raise him with the ability to answer questions about his race and family structure in a positive manner.

CHIC BUSY MOM: When looking at schools and neighborhoods do you look for a school that has more diverse families and ones that teach inclusion?

DONYELL THOMPSON: Our son currently goes to preschool. We chose this school because of the diversity of the school’s student body and because there were other children of same sex parents that attended the school. It is important for us that our son be in an environment that is open and accepting of our family structure.

CHIC BUSY MOM: What’s the biggest misconception you’d like to shed light on about same-sex parenting?

DONYELL THOMPSON: That our sexuality plays a factor in our ability to parent. We do not parent any differently than any other newly married heterosexual couple. We have the same worries and concerns about our son’s future. We perform the same household duties and chores. We barter over who will take off a day when our son is sick. We worry about the pesticides and hormones in our son’s food so we make organic choices for him. The reality is that our life is just as mundane as heterosexuals who are parenting. Of course, we have additional challenges and stressors that heterosexuals do not have because of the different treatment of gays and lesbians in this country, which requires us to take additional steps to protect our family unit. 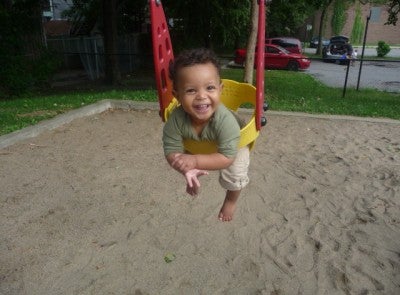 CHIC BUSY MOM: What would you say to other lesbian couples who may be considering having children?  What should they be prepared for?

DONYELL THOMPSON: Go for it! We think our decision to parent was probably one of the best decisions that we’ve made. We would love to see more African American lesbians choosing to have children together. However, if you do decide to parent, you should take some time to explore what options would be best for you—home insemination, working with an OB or midwife for IUIs or pursuing fertility treatments at a clinic. We chose a fertility clinic because we had fertility coverage (New York state mandates coverage), so when we began this process, Krista’s health insurance covered the costs of the IUIs. I then took advantage of my job’s open season to switch insurers to one that covered three IVF cycles. However, we still had to cover the cost of sperm, which can run anywhere from $350 to $600 per vial depending on what sperm bank you use and whether the donor is known or anonymous. Couples should have a frank and honest discussion about their views on parenting. They should also discuss custody arrangements, if the relationship dissolves. I know that this is unusual but there are too many stories in the lesbian community when a partner attempts to dissolve the rights of the non-gestational parent when the relationship ends. I strongly suggest that every couple do a Second Parent Adoption. In our case, we considered who would get custody of the two children if we divorced. We believe it would not be fair to separate the children who are siblings because they have a different biological mother. The couple should also consider the laws in their state to determine what steps they need to take in order to protect their family.

CHIC BUSY MOM: Are there resources that were helpful to you as a couple that you would like to share with others on a similar journey?

DONYELL THOMPSON: When we were trying to conceive, we spent a lot of time on Babycenter.com, exploring their various baby forums, especially their Lesbian listservs because it was nice to communicate with other women who was undergoing the same process. We also attended a workshop that was held at the LGBT Center for women who were considering having biological children that was sponsored by the Fertility Clinic that we used. In addition, we referred to HRC’s website to determine what legal action we would needed to take in order to protect our family unit.

CHIC BUSY MOM: What are you currently reading to your son at night?

DONYELL THOMPSON: Our son’s library is vast for a one-year-old. It includes most of the classics such as Corduroy, Green Eggs and Ham, Snowy Day, Goodnight Moon, Where the Wild Things Are and some current favorites  like Don’t Let the Pigeon Drive the Bus, The Family Book, Llama Llama Misses Mama, Pete the Cat, Charlie Parker Played Bebop, Before John Was a Jazz Giant. We hope to instill in Quinn a love for reading and literature.

DONYELL THOMPSON: Krista is currently training for the New York marathon so most of her free time is spent running and training for this event. At this time, I don’t get a lot of me time but when I do I like to take a spin or yoga class. In addition, I also explore my interests like soap making, sausage making, etc. However, on the weekends when Krista and Quinn are sleeping, I may rent a movie that I missed. I definitely love watching movies. For the past three months, we have been asking different friends to watch our son so once a month we can do something special as a couple. The past two months we went to the movies to see Fruitvale Station and The Butler. This month, we intend on doing a 50-mile bike ride together. 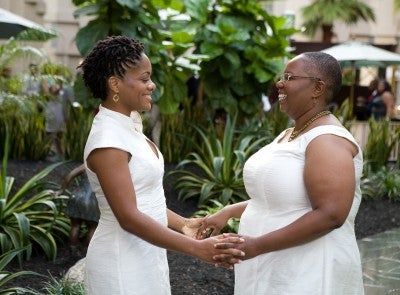 ECHIC BUSY MOM: What are the three biggest reward of being a mother?

DONYELL THOMPSON: Observing our son’s first accomplishments, i.e. turning over, standing or saying ‘Mama.’ What’s also rewarding is when we receive compliments from friends, family and strangers for our son’s well-mannered behavior and when he transitions easily to friends and family. The biggest reward is having the opportunity to experience life again through his eyes, i.e. going to the zoo for the first time, celebrating birthdays, creating and recreating new traditions from our childhood with our son.

CHIC BUSY MOM: What has been the biggest challenge for you both as a mother?

DONYELL THOMPSON: The biggest challenge is defining what our roles as mothers will be in our son’s life. Neither Krista nor I are attempting to fill the void that exists because our son has no father. We are two women who are co-parenting. As the gestational mother, I had to adjust my desire to come to our son’s aid when he cried and allow for Krista, the non-gestational mother, to build a maternal bond with our son. One way that we accomplished this goal was by splitting our parental leave. I took the first three months and Krista stayed home with our son for the last two months prior to him starting daycare. In addition, when I was on maternity leave, I would breastfeed during the day while Krista would do the evening feedings and bedtime routines. Now, our son has moments when he prefers one of us over the other but that is because we each serve different needs for him.

CHIC BUSY MOM: What are your guilty pleasures?

DONYELL THOMPSON: Krista’s guilty pleasure is chocolate chip cookies. My guilty pleasure is finding bargains. I hate paying full price when I can easily find my desired items at a discount, whether it is a preferred toy for our son or theater tickets. Also, since our son’s birth, I have refused to pay for items that I can easily make at home. We make our own baby wipes, detergent, deodorant, etc.