By Charreah K. Jackson · Updated October 23, 2020
This article originally appeared in the November 2018 issue of ESSENCE Carla Hall makes her mission clear in her new book, Carla Hall’s Soul Food (Harper Wave, $29.99): to reclaim and share our culinary history while offering delectable, farm-fresh twists on classic comfort cuisine. In 2017 the acclaimed chef and Nashville native retraced the steps of African-Americans throughout the South. She started in Charleston, South Carolina, where many of our ancestors arrived from Africa, bringing their own knowledge of spices and seeds. 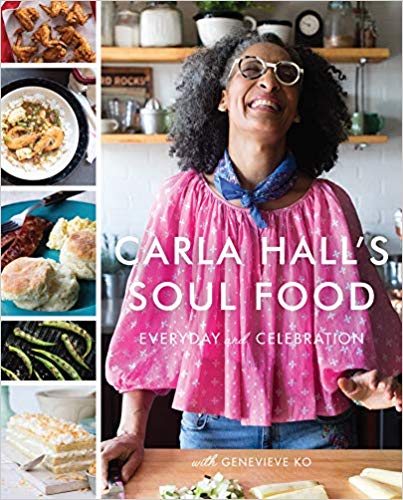 “[Famed chef] Alexander Smalls [once] asked me, ‘What’s the difference between soul food and southern food?’ ” recalls Hall (shown above with mother Audrey). “I simply said, ‘Black people.’ When Black people do things, I don’t care if [we’re] singing, dancing, walking, talking or cooking, it comes from our soul. It’s really about sharing with people.” The first thing to know about soul food, Hall says, is that it’s rooted in ingredients that are good for your body. “When you take all the healthy things out of our food—watermelon, peas, turnip greens, kale, collards and more—it goes to another community, and all of a sudden it’s amazing and all of that,” Hall says. “I really want to show people that you can eat soul food the way my grandmother ate it, because it’s really healthy food.” Speaking of Hall’s background, it’s been ten years since she made her TV debut on Bravo’s Top Chef, where she felt she was the least experienced contestant. “I look to my left and right and there are amazing chefs from high-profile restaurants, and I’m just the 44-year-old caterer who probably was the disposable contestant,” she remembers. Her discomfort had her craving foods from her granny Freddie Mai Glover’s kitchen. “I won with the dishes that I wanted to eat,” she says. “I grounded ­myself with food.” In her book she tells how she, like many Black chefs, strayed from traditional soul food after culinary school. “So often we make cultural compromises,” she says. And yet it was soul food that soothed her soul in her younger years while she was modeling in Paris and London and that led to her being fan favorite on Top Chef. Hall isn’t immune to the hardships of life. She lost her father last year. She also closed her restaurant, and her hit show, The Chew, went off the air. Yet her smile is as bright as ever as we meet over breakfast near her home in New York City, where she continues to do food segments on programs like GMA Day. “I know people will say, ‘Oh, your restaurant failed, and The Chew is over,’ and try to lump that together,” Hall says. “But I actually don’t look at it as a failure. The one thing that Top Chef did for me was make me comfortable with being uncomfortable.” Sometimes, she reflects, that’s where the true magic lies. Pick up the November issue of ESSENCE for Carla’s holiday recipes.