Getty Images
By Nina Hemphill Reeder · Updated December 6, 2020
When it comes to great debates, few things stir the pot like the question: is it chicken curry or curry chicken? Accustomed to hearing both, but never really knowing for sure, I reached out to a few experts to find out which one (wait for it) curried more weight in the Caribbean community. “I was laughing as I was reading your email because just a few days ago my Guyanese and Trinidadian friends were having this argument,” says Anthropology Professor Gillian Richards-Greaves, Ph.D., about the naming dispute. According to the Coastal Carolina University professor, whose research is centered on Caribbean culture (including food, identity and migration), curry arrived in the Caribbean by way of indentured laborers from India, Pakistan and Bangladesh. Therefore, the spice blends of the subcontinent were effectively woven into the fabric of Caribbean cuisine. Since Trinidad/Tobago and Guyana have the highest population of East Indians out of any other Caribbean nation, they would also arguably have the strongest Caribbean ties to the legitimacy of the curry-based dish and thus its name. Yet, despite the close cultural connections between Trinidad and Guyana, I’m also aware the nations find themselves in rivalry for various things, including the preferred name of the curry dish. “I have no idea why some Guyanese say it this way,” Richards-Greave says referring to the “chicken curry” leaning (Richards-Greave, who is Guyanese, says the Guyanese prefer to say “curry chicken”). “However, I would say that having spent a lot of time around Indians from India; they also tend to put the descriptive noun before the ‘curry,’ like ‘chicken curry’ and ‘alu (potato) curry.’ If this is indeed true, the Guyanese might be able to claim greater ‘authenticity’ in the naming of their curries.” 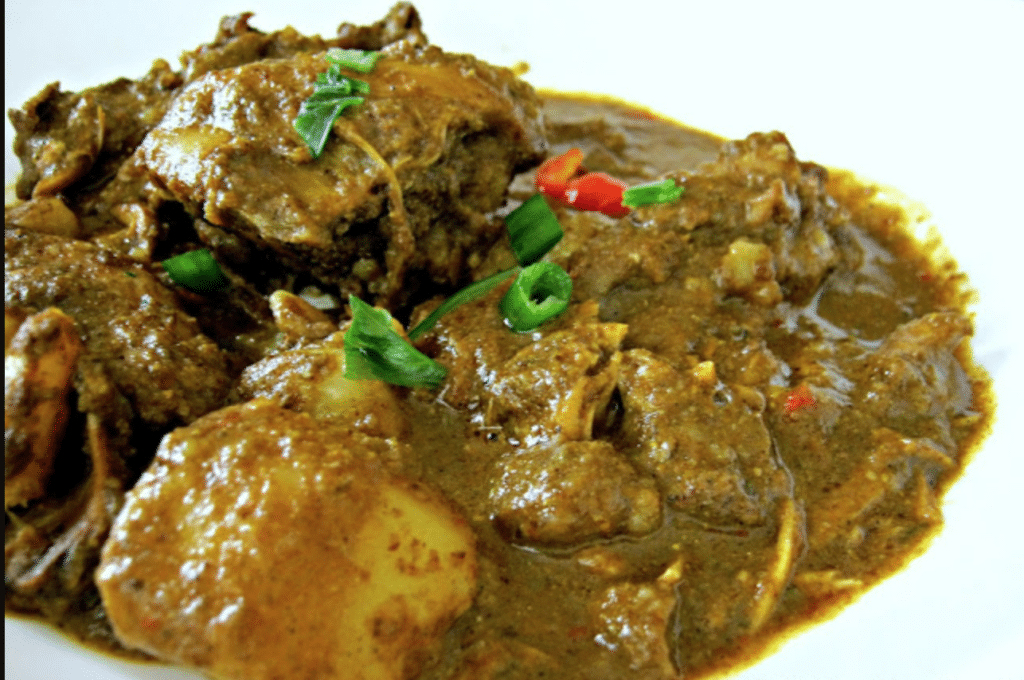 But, of course, just like I experienced when I tried making the dish, the curry paradox isn’t all that simple. After a few more discussions with my Caribbean comrades (in Jamaica, Guyana, Trinidad, Antigua, etc.), I discover even more discrepancies—with the nations themselves even split in their preference for the name. “Since I was a young girl, I’ve always known of the naming ‘debate.’ I choose to say ‘chicken curry’ because that’s how it was always referenced growing up in my Indo-Guyanese family,” says Florida-based food blogger Alica Ramkirpal-Senhouse of AlicasPepperPot.com. “We don’t say ‘chicken curry.’ No one says ‘chicken curry,’” replies Trinidad-born private chef Dexter Samuel emphatically. Samuel, the long-time personal chef to vegan songstress Erykah Badu, says his family owned a vegetarian restaurant in Trinidad, where they, of course, served curried vegetables. So, naturally I ask: What was it called on your family’s menu? “Curry vegetable,” Samuel laughs, just stopping short of adding, ‘duh’ to his answer.  “Always curry vegetable. And it’s curry chicken because we emphasize everything we do with the chicken. If it’s fried chicken, curry chicken, baked chicken, stewed chicken. We never put the chicken before what we’re doing.” Chef Kwame Onwuachi backs that. With a diverse heritage (his father is Nigerian-Jamaican and his mother Trinidadian), the chef has cemented himself as a bit of an ambassador of Afro-Caribbean cuisine. “We said ‘curry chicken’ for sure. More people in the Bronx call it that,” agrees the Bronx-born Onwuachi, of Top Chef fame. Showcasing menu items from goat roti to jollof, Onwuachi celebrates the African Diaspora foodways at his Kith/Kin restaurant, a new Washington, D.C. hotspot located in the InterContinental hotel at The Wharf. And, Onwuachi admits, despite growing up partial to the curry-first use, he still names one of his menu items, “King Crab curry,” because he says the name honors the dish’s history better. “It was ‘curry chicken’ when I was growing up in Guyana,” says Chef Tavel Bristol-Joseph, a pastry chef at Austin’s much-acclaimed Emmer & Rye restaurant. “And I think when I moved to New York, that was the first time I had ever been faced with someone saying it different. That’s the first time you question: Have I been saying it wrong the whole time.”
Loading the player...
But, at last, is there really a wrong? Well, my research would suggest it all depends on who you ask. Yet, the most solid answer would ultimately depend on whether you consider curry more of a noun (as in the dish itself, where chicken curry works) or an adjective (as in the spice preparation, where curry chicken works, too). “The proper (English) way is ‘curried chicken,’” says Richards-Greaves. But even with that understanding, I doubt the argument will ever be put to bed. However, there was one thing everyone did agreed on: the true debate on curry doesn’t really lie in the naming of the food. “I haven’t heard debates on who says it differently…not in that context,” says Chef Tavel, then dropping his voice as if to tell me the real insider scoop, “I’ve definitely heard debates who has the best.” And just like that, when I pose this question to all my chef experts, the knives come out. Each ardently side with his family’s native country, saying it packed more flavor. Even food blogger Ramkirpal-Senhouse, who married a Trinidadian, says she’s prefers her country’s version. So, I take the question back to Richards-Greaves. As a non-chef and professor, surely, she’d have a scholarly approach to the answer. “I think you want me to be killed,” she jokes. “But, of course, I’ll say Guyana.” If all this has got you hungry, then check food blogger Alica Ramkirpal-Senhouse’s recipe for Guyanese-style Chicken Curry.