By Charli Penn · Updated October 23, 2020
Power couple Gabrielle Union and Dwyane Wade continue to find new and fun ways to partner up and grab our attention. This time, they’re starring in their first ad campaign together for Gatorade Zero, the new sugar-free drink offering for fitness enthusiasts in the brand’s portfolio. The Wades kick off the campaign with a 30-second TV commercial where they playfully show off their competitive couple side. The 13-time NBA All-Star is known for his athletic prowess, but in the ad, Union pushes her husband to the max in a series of skits where the couple can be seen trying to one up each other in one fitness challenge after another. Of course, Union bests her husband a time or two in the hilarious commercial as they taunt one another making every workout a competition just as any fit couple would. For the Being Mary Jane star, 46, and her husband, the decision to team up for this endeavor was an easy one, and just made sense for where they are in their personal lives right now. “I think it’s great because we’re both in the gym all the time working out,” Wade, 37, told ESSENCE. “My wife is an athlete too, and even though I’m looked at as this NBA super athlete, in a couple of months I’m gonna be just an old, a former athlete. I think what’s cool about Gatorade Zero is that it’s a drink for athletes that are just going to the gym and want to look good in front of the mirror. [Those who do] lower and shorter intensity exercise, but that’s kind of what my life is going to be, I got to look good in front of the mirror with my wife.” Mixing fitness and fun is nothing new for the spouses, who tied the knot in a lavish Miami ceremony. “We both ran track briefly in high school,” Union shared. “We had a track workout this summer and we might have kind of recreated the Olympics, [with] me being the States and D being Jamaica. So I won some, he won some.” 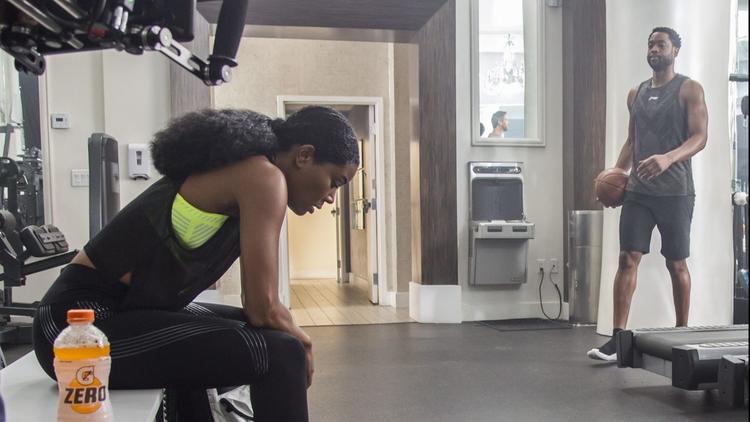 “And I was out for a week after that,” Wade jokingly interjected. “I was hurting.” If they’re not battling to see who can go the hardest in the gym, the new parents, who welcomed their first child together, 4-month-old daughter Kaavia James Union Wade, via surrogate in November 2018, know how to make anything competitive. “We play spades together and a lot of people say as a couple you should not do that,” Wade shared. “But we hold it down, we hold it together. This is just how competitive [we are], one night we got back from dinner and we had a little hamper in our room, we were in L.A. in the house, and I shot my socks in the hamper and she wanted to do the same thing and see if she could shoot further than me. We had a moment and I recorded it. Can you guess who came out on top in their bedroom two-pointer showdown? “She hit the shot and I didn’t,” Wade added. “It was fun. That’s just how competitive we are.” Their Gatorade Zero commercial is just as priceless as those impromptu (and always viral) couples dance routines on Instagram that the Wades are known for. Watch them sweat it out!