By clicking Sign Up, you agree to our Terms of Use and that you have read our Privacy Policy
Skip to content
Courtesy of Pierre Bennu
By Britni Danielle · Updated October 23, 2020
Like many artists, Pierre Bennu tried to play it straight. After graduating from the Pratt Institute, the 44-year-old Brooklyn native took a job on Wall Street, but it didn’t work out. “We tried to do corporate, but it didn’t fit,” Bennu says of both he and his wife, Jamyla Bennu. “When we got married we were like, let’s fail on our own terms.” At the time, Bennu worked for financial giant AIG and didn’t enjoy the mundane grind of his job, no matter how good it paid. “I was stressing out and my hair was falling out, and she was doing what she didn’t want to do,” he says. “And we like look, we’re college graduates, we can figure this out. We can at least figure this out and pay the rent on our own terms.” Instead of being lulled into the financial comfort of Corporate America, Bennu and his wife, Jamyla, embarked on a series of hustles to stay afloat. “We basically did everything, but we said, no hobbies. If it doesn’t pay for itself or make a profit we’re not going to do it — and that worked,” he recalls, noting the couple published books, created a hair care line, and even DJ’ed to cover the bills. “We did everything possible, and whatever stuck we kept doing.” These days, Bennu is a visual artist, filmmaker, stand up comic, and co-owns beauty brand Oyin Handmade with his wife. The pair also run Exittheapple Artspace, a Baltimore-based space that fosters community, supports creativity, and provides education and networking to the area. ESSENCE recently caught up with Bennu to discuss the importance of following your passion, the myth of a starving artists, and what it means to be a Do Good Brother. ESSENCE: As an artist, did you have any models or examples that you looked up to to prove that artists don’t have to starve? Pierre Bennu: No straightforward examples. Most of our examples have an immediate source of funding. If you look back at the Harlem Renaissance, people had money. Or if you look at the hip hop movement when it blew up, people had major labels giving them money. So we had very few independent artists to look to immediately, aside from our peers who were making it happen on their. A lot of it was trial and error. We lost our apartment, we caught a lot of L’s, but there were great lessons to learn. And I don’t want to sound corny, but our love was the constant. Even when we didn’t have a house we were like, ok, we still have each other, we’ll figure this out. 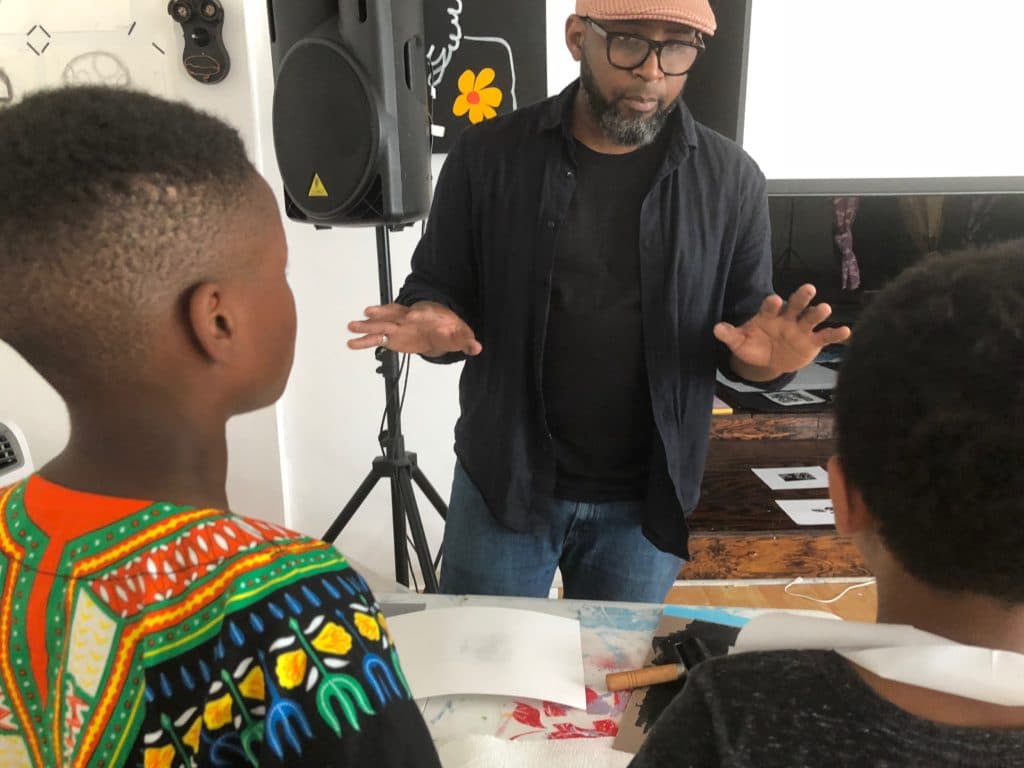 ESSENCE: How long did it take for you to know working on Wall Street wasn’t for you? P.B.: It took about two years. I would wake up and patches of my hair were in the bed, and I’d have to shave before I went to work. It was crazy! I was like, this is not living. It started out as a temp job. The guy who was working there passed away, and they were like, you can have the position now, he’s dead. I talked to his daughter and she was like, he came to New York during the Bebop era and he wanted to be an artist, and he got this job and got comfortable and never pursued his dreams. And I was like, I can’t be that dude. ESSENCE: Have you always been an artist? P.B.: Yes.  I grew up in Brooklyn during the late 1970s and early 1980s. We played outside, but as it started getting rougher, I was very much attracted to graffiti. I knew if I did that I wouldn’t be allowed back into the house. So my mom was like, look, I’ll give you all of the magic markers you want to be as creative as you want. I edited and shot my first film when I was eight-years-old, so I was constantly creating. ESSENCE: You sell your artwork through Exittheapple, but it’s also a community space. Why was it important to not just monetize your art, but also give back to the community as well? P.B.: A couple of reasons. One, there are all of these stories that are not being told. We function off of narrative and stories. So if the only stories being told are by people who are not us, you’re not getting the whole story. Being able to use the language of art is empowerment, and that’s really what this space is for me. It’s about the power of narrative. The way that art is presented to us, there’s this gap between people and the art. It’s presented as this elite thing, and I just want to make it accessible again and give us the power to speak, to have conversations, to bridge that gap.


I had another sleepless night. This is one of the pieces that came of it. When an elder creative passes/dies/transitions there is (at least for me) a noticeable paradigm shift. We sink deeper into our role as the #elders & my conscious thoughts lean more heavily towards legacy. What have we left behind? Was it enough? Will I live long enough to bring new #dreams to life? Who have we helped/mentored? Will our work be remembered? I’ve seen Ntozake Shange’s work transform people on both sides of the stage & I’ve seen those people #grow into whole new beings because of that interaction. Salute to all my #artists in every genre. I see you. & before you ask… #Yes I made #prints available & I also made #coffee MUGS & a long & short sleeve woman’s scoopneck tee if you’re abt that life. The piece is called ‘I Found #God In Myself’ & the entire quote is masked with in the piece 😉 Available on exittheapple.com/shop 🌈🌈🌈🌈🌈🌈🌈🌈🌈🌈🌈🌈🌈🌈 #NtozakeShange #art #love #print #rainbow #playwright #black #blackwomen #rip #revolution #portrait #lineart

ESSENCE: Speaking of art, after Ntozake Shange died you created a piece inspired by her work. Why did you want to create a piece to remember her? P.B.: Artists are the shamans of our day, and I really want to acknowledge the craft of taking abstract thought and creating a piece of work that speaks through time. It’s not just magic, but it’s also craft. She was one of those people who bridged that gap I was talking about. She made it plain, but the craft was still also there. She gave us, back to us. There are artists that do that from time to time in every generation and she was one of them. She gave voice to us, to the voiceless. I couldn’t rest, and I felt like so many of our greats are passing away in these very quiet ways, and we’re not acknowledging our heroes like we have to. We have to acknowledge them as the paradigm shifts and we become those elders. It was very important to me that I say something–and I’m not very good with words–but I just had to get something out. ESSENCE: What does it mean to you to be a Do Good Brother? P.B.: Being honest with yourself and the world. I’m not afraid to show all sides, to show my L’s, and to show my victories. Also, just always being available, always being honest with your energy and lead by example. I’m always saying, say it with your work. You know your community? Show that. I’ve seen amazing magical things happen in Baltimore, it’s not reported, but the people who care show out. And it’s not a sacrifice, it’s love. To me, what a good brotha is is somebody who shows with their actions. I don’t have to question you, your actions speak. So, say it with your work is what my definition of a good brotha is. Follow Pierre Bennu on Twitter and Instagram. Catch him Dec. 1st at the Baltimore Center Stage opening for Jason Weems. To order his Ntozake Shange print, click here.