It all started back in college. As a student at Morehouse College, Brandon Frame realized that he was surrounded by a diverse cross-section of young Black men, but many people only had one view of people who looked like him.

“Morehouse is a microcosm of Black men in America. I was hearing all of these different stories and narratives, and we were all coming from different walks,” he tells ESSENCE. “Then I would share those with young men — kids who were in middle school and high school — and they were like wow.” In college, Frame volunteered as a mentor to young people in Atlanta, and one experience ignited his passion for changing the mainstream narrative about Black men and boys. “We brought young men to Morehouse to visit the school and we did a debrief afterward. One young man said the only other place that he could envision like Morehouse was prison,” he recalls. “When we asked him to expound, [he said] he couldn’t think of another place with that many Black men in one place at one time.” The stunning experience was the catalyst for TheBlackManCan, a media platform and non-profit organization that seeks to uplift, empower, educate and motivate young men of color. “All of these things were the tipping point, [that made me realize] we need to create this space for our authentic stories to be told,” the 30-year-old says. ESSENCE recently spoke with Frame about the challenge facing young Black men and boys, his definition of a Do Good Brother, and why Black men need dedicated spaces of their own. ESSENCE: Where did the idea for TheBackManCan come from? Brandon Frame: MK Asante is one of my favorite scholars and he says, “Once you make an observation you have an obligation.” So I made an observation that boys and men of color need to see positive images of themselves and have their stories told. I realized that when I was a student at Morehouse, as well as starting a mentoring program at Charles R. Drew charter school on the eastside of Atlanta. I made these observations around what we needed to do for Black men and boys, and therefore followed through on the obligation to create it. Eight years ago I started a blog and since then it has grown into this digital media platform and non-profit organization with a mission to celebrate, educate and inspire.

Women are always going to different brunches and empowerment events and it’s amazing. The content they’re getting, the inspiration, the sisterhood that is being built–not just in small communities, but nationally — is amazing. But when I ask where you send your brother, husband, boyfriend, your son, your nephew that’s similar to these events that you’re going to? People don’t usually have an answer. So that’s an observation that I’ve made, now I have an obligation to grow TheBlackManCan into that space to become a place that allows men to create spaces for boys and men for healing, empowerment, restoration, and brotherhood. ESSENCE: What are some of the most common challenges you see with young people you work with? B.F.: The biggest thing, and our main focus, is positive self-identity and social emotional skills. We really focus on that around confidence, decision-making, vulnerability, and having confidence in all these different spaces. I go speak to young men all across the country and in a room you’ll ask young men what do you want to be. And you’ll get a lot of things–engineer, doctor, lawyer, and things like that–but you’ll also get a considerable amount who’ll say, “I want to be an athlete or in entertainment.” I don’t get upset with that because I was also a young man who, at that age, would say the same thing. What we want to do is give them that same level of confidence when they say they want to be an engineer or graphic designer, a doctor or a lawyer or an editor–I want them to have the same level of confidence about all these things that they’re striving for. I want to eradicate the doubt inside of them, so when they think they want to be a software engineer they don’t doubt it can happen. 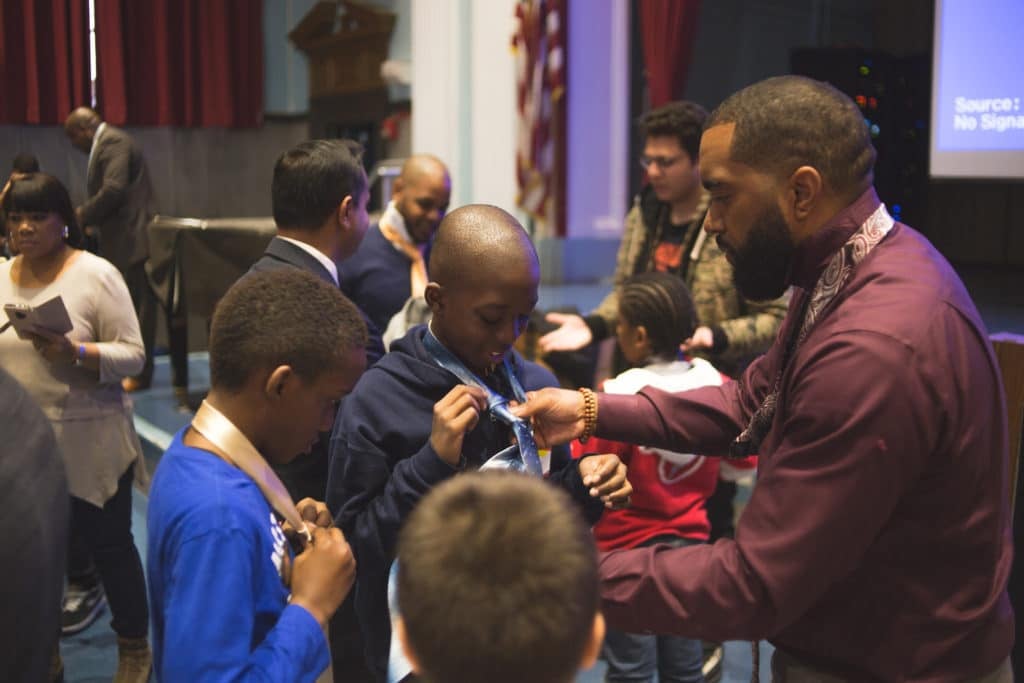 ESSENCE:  Women and girls were shut out of so many opportunities for such a long time, and they also still struggle with a lot of challenges today. So do you ever encounter pushback from those who wonder why you don’t include young women, too? B.F.: Absolutely. But we know that we don’t have infinite resources, and currently the achievement gap that exists between Black students and white and Asian students is single-handedly being eradicated by Black girls. So that means I need to do what? Pour resources into the group that is doing the worse, which is Black boys. At the same time, I have three sisters, so I know how important all these spaces are for girls. But [Black men and boys] need the same type of space. I don’t have white male privilege, but I have male privilege, so we do use our platform to voice, hear, support, and celebrate the voices of women and girls. We do that through our awards, and we also do it publicly. We’re just saying there needs to be a space for us, because by doing that we are able to build whole men who are better men for themselves, but also for their families, their women, their partners, and society as a whole. ESSENCE: What does it mean to you to be a Do Good Brother? B.F.: That’s a good question. Being a Do Good Brother means allowing your ego to operate from a place of love. It means hearing, celebrating, and acknowledging the voices of women and girls. It means to build brotherhood unapologetically and uplifting communities. Being a Do Good Brother means to challenge the status quo around our communities. It also means to know that as a Black male you’re not monolithic, you’re multifaceted. It means to understand and know your emotions and know how to handle and own up to them. Being a Do Good Brother means to love unapologetically. ESSENCE: How can others support TheBlackManCan? B.F.: We have our “Raising Kings” campaign. It costs $25 for young men to participate in our program, so we’re asking people to donate $25 to support one young man. Visit TheBlackManCan website to learn more about Brandon Frame’s work. Also, follow the organization on Instagram.
TOPICS:  Eye Candy Do Good Brothers