By clicking Sign Up, you agree to our Terms of Use and that you have read our Privacy Policy
Skip to content
By Janelle Harris · Updated October 23, 2020
Morning is just welcoming the light when Auria Moore and Porsche Stephenson step onto the unblemished surface at Skatetown Ice Arena in Roseville, California. The rink has been polished into a clean slate there’s no noise, and no kids underfoot to create distractions. It is a competitor’s utopia. Moore, 33, and Stephenson, 27, observe a religious dedication to these early practices. They’re an outgrowth of the shared love the childhood friends turned teammates have for the sport of curling, followed closely by a mutually competitive nature that intensifies just about everything they do as individuals and homegirls. It’s especially important to them in a game that still requires a quick Google search for many folks to recognize, even more especially for two Black women who became fast accustomed to almost always being the only representation of color whenever they’re on the ice. They discovered curling and their talent for it in June 2015 in what seemed like a coincidence at the time. Moore was recovering from an injury and wanted to find something to do that would help her stay in shape without overexerting her healing body. “I’d seen curling in a Beatles movie—I’m a big Beatles fan—and just on a fluke, I said to Porsche, ‘hey, I wonder if that’s something they do here in the States.’ She Googled it and we saw a Learn to Curl class nearby,” remembers Moore who, like Stephenson, is a native Californian. Coach Bruce Johnson welcomed the newbies to their first experience in the sport and noticed almost immediately that they were both naturally gifted players. The members of Wine Country Curling Club in Roseville picked up on it too. “They all said, “Oh my God, you have to play this. People take years to even get to this skill level and you two are at the Learn to Curl doing it,” said Stephenson. They threw themselves into the learning process and what started as something new to try for fun has become a consuming passion. Behold, two more brilliant examples of Black girls can do anything. 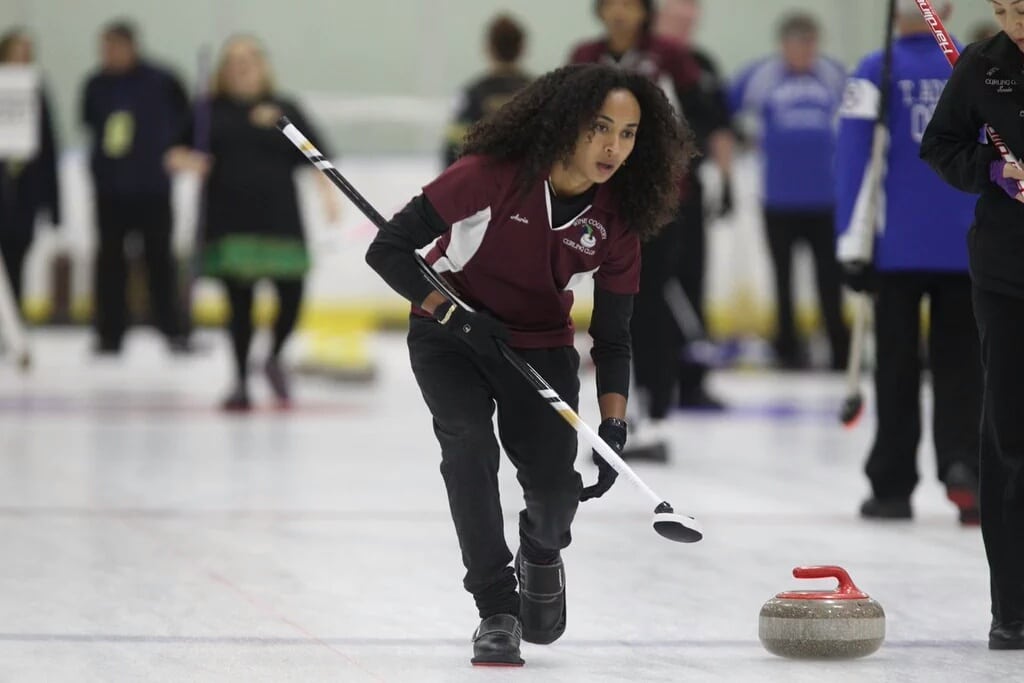 Curling dates way back to 16th century Scotland. In its contemporary form, teams of two players slide 44-pound granite stones down a sheet of ice toward a target area with four concentric circles called “houses.” There’s some other stuff going on in the process—competitors are vigorously scrubbing the ice with a broom as the stones travel down the lane, there’s lots of corporate yelling that players superstitiously believe help the stones land closer to the goal—but the object is to get the stone as near to the center of your circle as possible, if not all the way in. “It’s almost like playing shuffleboard on ice. That’s what a lot of people compare it to. But analytically,” Moore explains, “it’s also really like chess because you have to be able to know when to sweep the ice and where to throw the stone. It’s really a strategy game.” To an unlearned spectator, it just looks hard. Pretty much anything performed on ice doubles the level of difficulty and deserves additional respect. What’s even more impressive is that Moore and Stephenson became curling prodigies in their spare time. Most serious curlers don’t balance their competitive play against full-time careers. Both women work in the technology field—Moore in marketing, Stephenson as an account manager—so their sport of choice is essentially another outlet for their commitment to excellence. In a sport dominated by white men, they are pioneers to make the field more accessible and inviting for other Black folks. The racial prejudices and politics that undergird the sport are a challenge but not a deterrent, they say. “When you fight for something, you want to believe that if you work hard, you’ll fulfill your goal in the end. There were a few moments when we were feeling a little discouraged,” Moore adds. “When you get on the ice, your opponents are supposed to shake hands and say “good curling.” Some people don’t shake our hands. That’s okay. We still smile. We’re just so happy to be there, win or lose, you know? You’re still going to see us at the next competition.” 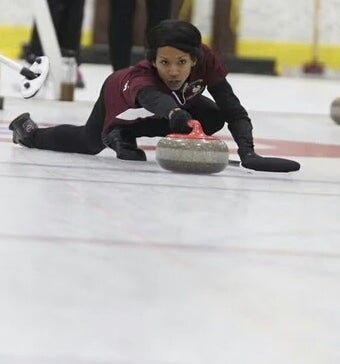 Just three months after that first Learn to Curl class, they were playing at the state level. Within 10 months, they were asked to represent the Wine Country Curling Club in competition by its president (and their trainer) Bob Kuhl. They’ve played in invitation-only tournaments—they’re called “bonspiels”—that pit them against international champions and curling veterans with 20 or 30 years of experience behind them, encountering other Black curlers only once or twice. They are very likely the only consistent two-member team of Black women playing the sport. Even when they pair up with other duos to create four-person teams, Moore and Stephenson make it very clear that it’s important for them to always play together as teammates. “Some amazing barriers are being opened. We’re history in the making. Even us just being in California is historic,” said Stephenson. “Almost all of the curlers that compete like we do are from icy states: Wisconsin, Minnesota, Alaska. Here we are—Cali baby.” Last year, Team Moore and Stephenson medaled for the first time and, because they’re top competitors, they did it twice, placing second in the California competition and third in the Arena National Championships. Now they’re vying for spots on the High-Performance Program—or “the HPP team”—which is basically the NBA of curling and focused on building the momentum to qualify for the 2022 Olympics in Beijing. “Our ultimate goal is to be able to represent the US in international competition,” Stephenson added, “and that includes aspiring to win our national and world competitions so that we can wear Team USA on our backs.”