“I’ve had my hair short for a really long time—it’s been nine years. Before I cut it, I had long hair that was everything from permed to straight. I remember when I got into Juilliard—which was just crazy to me, that I would be studying at a school like that—the choice to cut all my hair off was really symbolic for me,” Samira Wiley shared during her MIMI photoshoot. “It felt like I was making the choice to have a new beginning. It’s the same really for a lot of African American girls at that age—you see a trend of them going back to their natural hair—that was definitely what I was chasing at that time. And I didn’t really go back [to long hair] because it felt so good.”

And just like that, without even knowing it, Samira Wiley set the stage for playing one of Litchfield’s most beloved inmates—Poussey Washington—whose TWA now precedes her on Netflix’s hit show (strike that: cultural phenomenon) Orange Is the New Black, which is currently filming its fourth season in New York City.

And while short hair might be core to her character on the show, Wiley insists she’s a fan of longer hair. Having tried extensions and braids at a younger age, she’s not ruling out a big change post- OITNB: “I am looking forward to whenever the show comes to a close—whenever that is—to be able to have another one of those new beginnings. I’m looking forward to growing my hair, and doing different things with it,” she says.

That itch for a new ‘do is realized on the set of her MIMI cover shoot, where Wiley was excited to try out wigs styled by wig master, Cynthia Alvarez (you might remember her work on cast mate Dascha Polanco’s Latina magazine cover). “To be able to look at yourself in the mirror and see something that you would not necessarily think to do on your own, you’re like, Oh my God, I need this in my life!” And seeing her styled in a choppy lob and purple, middle-parted updo, we Couldnt. Agree. More.

Wiley credits her mom and older sister for her beauty evolution, introducing her to different kinds of body and hair oils, and always inspiring her to switch things up. As a young girl, these influential women not only served as her mentors, but as style chameleons who still continue to encourage her beauty and fashion progression on the daily. 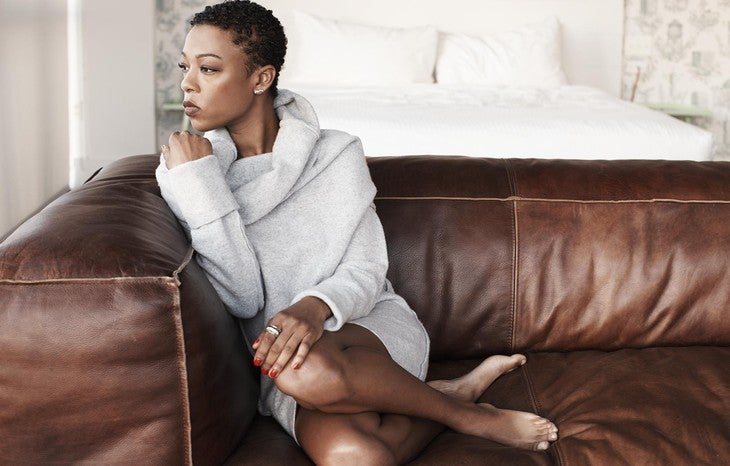 “My mom is super fabulous, and I remember her telling me at 13, ‘You can start wearing makeup now.’ And the funny thing is, I didn’t take her up on it!” Even fifteen years later—and it’s easy to see how with her enviable skin (see inset, below)—Wiley doesn’t wear a ton of makeup in her everyday life. “To be honest, whenever I go to shoots or I’m on set, it really makes makeup special and allows me to have so much more fun with it—I don’t wear it on an everyday basis, because I like my skin to breathe.”

Before landing a role on a hit series, Wiley was involved in the theater world post-Juilliard, but the confidence and self-assurance that helped her land all of her roles dates back to her early family life. Growing up the daughter of Baptist preachers (as in plural, both mom and dad) in Washington D.C., it might seem like Wiley—who is openly gay—would have had to struggle with telling her family about her sexuality, but her experience was quite the opposite.

“It’s heartbreaking to hear what you hear about so many people in the [LGBT] community—you know, everything from parents telling their children that they are going to hell, to parents literally denying who their child is. I honestly feel like that is worse [than non-acceptance], because you have gone through so much at that point to accept yourself in society, and you muster the courage to be able to come out to your parents, and it’s completely denied.” Thinking about her own parents in that scenario, Wiley says, “It’s terrifying to imagine that, to say the least.”

And it’s growing up with this acceptance and support system, that according to co-star Dascha Polanco (Daya), has turned Wiley into the person she is today: “As a friend, as a cast mate, she’s very accepting of everyone,” Dascha tells us. Being in her current position—Wiley knows there is a great duty beyond acceptance, which is to be a good role model for the LGBT community.

“I think that what comes along with my visibility is a responsibility, and I don’t take that lightly. I want to make sure that any young person or anyone really who is looking up to me—who sees a glimpse of who I am as a person—that they see no shame, that they see pride, and that I’m truly unabashed about the person that I am.”

And in a Hollywood that is finally celebrating actors who come out—on their own terms—Wiley is using platforms like Instagram (with her 1.6M followers) to share her pride, her feed being full of everything from selfies and funny memes to intimate kissy pics with her girlfriend, Orange Is the New Black writer Lauren Morelli. Samira likes to keep their relationship private, but mentions that while they don’t share makeup, they do share clothes since both are a similar size. “I actually am wearing her shirt right now,” Wiley divulges on set.

And while life on screen in Litchfield might be fictionalized for the show, it doesn’t mean some of the stereotypes of being in a lesbian relationship don’t follow her around in real life. When asked about people putting labels on her and her girlfriend like “lipstick” or “tomboy”, Wiley thinks the whole classification system is passé.

“I don’t really have a word for myself, or a category that I put myself in. I don’t think about it too much, I just wear what feels good. If I can look in the mirror with whatever I have on, if it makes me stand a certain way, if it makes me smile, then I don’t care whether it’s from this end of the spectrum or the other end. I remember this belief: That Sunday is for God, and that you wear your best for God, your most glamorous dresses on Easter Sunday, and feeling like a million bucks. And growing up and learning more about myself, I feel like life is all about finding the middle, so I have gone back and forth to different styles, from girly to dressing completely like—as we would say in society and for lack of better words—like a “boy.'”

For Wiley—who will be seen in upcoming film, 37, about the murder of Kitty Genovese— there’s a knowledge and maturity in being herself (at 5’3 and a size 0) that proves some of the best things come in small packages. “I was at a photo shoot and one of the people who was helping me try on different clothes—I had an outfit on—and she goes, ‘Oh don’t worry, so-and-so is a whiz with Photoshop.’ She was referencing some part of my body and I couldn’t believe it!”

“It just made me more aware of Hollywood— Oh my God, how are these girls supposed to love themselves? How are they supposed to feel any pride or feel like they can even achieve anything that is put in front of them?” she asks. And even though Orange Is the New Black has been praised for its diversity in casting of different ethnicities and women of all shapes and sizes, Wiley says—having it been the only show she’s ever starred on—that she was at first naïve to the fact that “some of the actresses on the show wouldn’t be cast on network television shows. How horrible is that, the unachievable goal that is put in front of girls every day? Look at someone like Danielle Brooks [who plays Taystee], she is sexy, you know? These women are sexy and they look like other women—they look like the people that are watching them.”

But despite that on-set stylist and the pressures of a Photoshopped Tinsletown, Wiley has already unlocked what makes her happy and that’s what keeps her going, because she loves herself, and not in some weird, vain, Zoolander-y kind of way.

“I do love myself, and what we need to strive for is young people loving themselves [too]. Because you can’t move forward—you can’t have people love you, you can’t look at other people and accept them for who they are—unless you completely love yourself.”

This article originally appeared on MIMI.