Gossip magazine InTouch Weekly may have gone too far this time. In a regular column called “Double Creature,” the publication compared Solange Knowles’ hair to that of a dog. 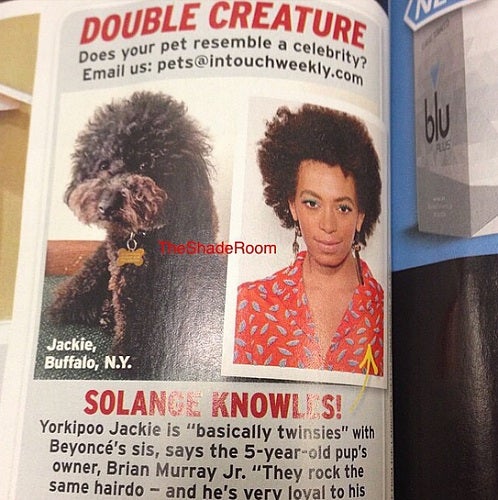 The weekly column features reader submissions of pet photos who they think resemble celebrities. The article showed a photo of the singer and designer side-by-side with a furry black dog and read: “Yorkipoo Jackie is ‘basically twinsies’ with Beyoncé’s sis… ‘They rock the same hairdo.’”

Although the comparison sparked serious backlash on social media from the natural hair community and Solange fans alike, this isn’t the first time the publication matched celebs with animals. Past features included a Tina Turner and newfypoo comparison.

“It still is tasteless (not surprising for a gossip magazine) and a sobering reminder of the resistance some black women face when they choose to rock their natural hair unapologetically,” wrote Leila Noelliste of BlackGirlLongHair.com. “The comparison feels particularly shady given that Solange’s recent media coverage has mainly involved her stunning, stylish, and universally praised wedding.”

What do you think? Was InTouch Weekly being cute or just completely disrespectful?