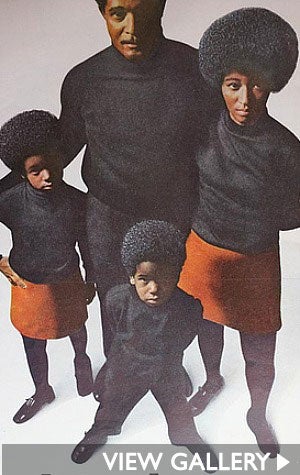 The idea that wearing natural, chemical-free Black hair is considered “political” is a strange one, indeed. But within the context of our history in America, it makes perfect sense.

When the first generation of African slaves landed in America, they’d been accustomed to carefully treating their hair with herbs, creating elaborate cornrowed styles and grooming their kinks with carved wooden combs (thought to be weapons, they were discarded on the slave ships). On American soil, unable to care for their hair the same way, women began wearing rags to cover head sores and bald spots. Their kinks were deemed unruly and ugly; a source of shame.

Then, as young slave women began giving birth to half-white babies, their longer-haired offspring were considered better, prettier, more civilized. The idea that “White is right” was so embedded in the country’s DNA that, by the time the Black is Beautiful movement hit in the ’60s — and women proudly rocked braids and afros (like in this vintage Afro Sheen ad) — the simple act of embracing the hair that grew out of our heads was considered a bold counter-culture statement.

These days, we’d like to think that the decision to wear our hair natural, relaxed, or in a weave is about the freedom of choice, not a political statement. But when certain hairstyles can still prevent women from reaching the top of the corporate ladder (you’d be hard-pressed to find a high-ranking politician with dreadlocks), we can’t help but think we’ve still got a long way to go. In celebration of Black History Month, let’s take a look back at some notable moments in the history of revolutionary hair.