Dr. Dorinda Clark-Cole, Grammy award winning singer, world-renowned pastor and CEO, has been a professional musician since she was a child. Her mother, influential music minister Dr. Mattie Moss-Clark who’s responsible for creating Gospel’s three-part harmony, molded her and her four sisters into the powerhouse evangelists and vocalists we know today. Similar to the story of The Jacksons, when the rest of their friends were outside playing, the Clark sisters were in their Detroit childhood home, perfecting their harmonies and creating their famous “Clark Sound.” 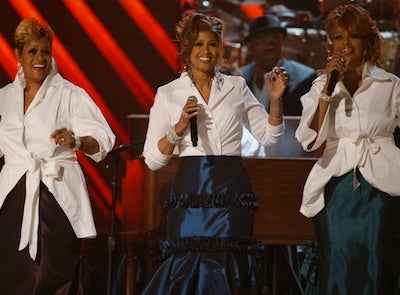 The Clark Sisters perform at the Grammy Awards.

These days, Dr. Dorinda Clark Cole has taken her God-given gift of ministry way beyond the confines of Detroit. After releasing four solo albums, creating fashion lines, raising two kids and taking care of her husband, the second youngest of the sisters still fulfilled her calling to speak all over the world. From Japan to England, the city girl took her passion for God to an international stage and broke a record in South Africa as the first woman to preach to over 4,000 people in that country. Audiences could not get enough of her uplifting performances and moving testimonies.

Still, with one listen to her powerful sermons, it’s evident that Clark-Cole did not always have it easy. Though she was raised in the church and has always had deep faith, after she lost her mother in 1994, she fell into a dark depression. “I didn’t understand why it was happening to me…It was very devastating,” Cole recalls on her website.

On one of her darkest nights, Dorinda got into her car and began to drive toward a bridge near her home, “While I was right there…the enemy was speaking to me, so I had a war going on. I began to drive and accelerate up to 80 miles per hour. God spoke to me just as plain as day and said, ‘Dorinda, are you going to let everything that has been invested in you go down the drain?”

Dorinda took her foot off of the gas and coasted on to the bridge. She immediately broke down and thanked God for stopping her, as God whispered, “Peace be unto you.”

After her literal ‘come-to-Jesus’ moment changed her life, she shared her testimony with anyone who would listen and her relationship with God became even stronger. In 2004, she was given an honorary Doctorate of Divinity from Mt. Carmel Theological Seminary of Fresno, CA. To this day, she shares how she overcame the darkest moment of her life to show others that it is possible, too.

When she is not singing, preaching or with her family, the Stellar Award winner hosts TCT Network’s The Dorinda Show, designs clothing for her various collections and appears all over the world to spread her passion for God. Nothing or no one will slow her down.

For continuing to keep her faith first and showing us all how to do the same, Dr. Dorinda Clark Cole is our #WomenEmpowermentWednesday pick.

See her live on Sunday, July 5 during the “Hour of Power” at the 2015 ESSENCE Empowerment Experience.  Single Night Tickets to the ESSENCE FEST are on sale, now.