For the first time in the 11-year history of 365Black Awards, McDonald’s called on black communities across the country to nominate this year’s Community Choice Youth Award recipients. Community members were asked to nominate amazing teenagers who were making a difference within their communities “through vision, compassion and diligence.” Two finalists, one male and female, were chosen to be honored alongside celebrities and philanthropists at this year’s star-studded event, and each went home with a $10,000 scholarship. Meet one of the winners, Skyler Grey, below. 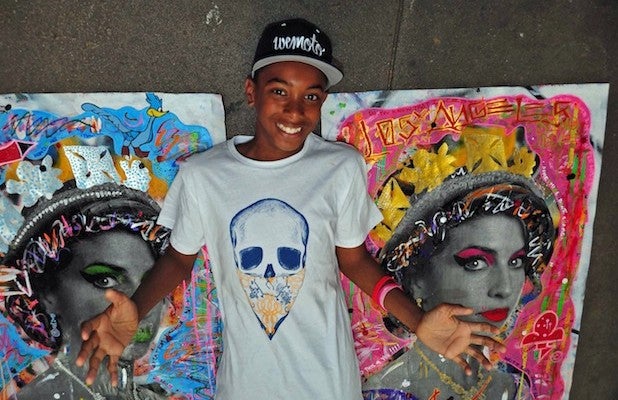 Arist Skyler Grey’s life is a testament to the power of turning tragedy into triumph.

At age 2, Skyler’s mother was tragically killed in a sorority hazing accident. Shortly after, his father put him in art therapy, and that’s where his love for sketching began. Drawing became a way for Skyler to release his thoughts and frustrations, and it would later become his way of creatively expressing a vision for his community. Now, at 14, he uses his sketches to raise money for charities by gifting his pieces to local art programs and by donating 10 percent of the proceeds from his work to local art initiatives. (His work sells anywhere from $6,000 to $25,000 a piece!) He also dedicates his time to organizations committed to social good, including Boo2Bullying, After School All-Stars, and Iconic 32.

Grey also has quite a few famous fans, including rapper The Game, singers Cassie and Ashlee Simpson. Actor and singer Evan Ross is also an admirer of Grey’s work.

Kudos to Skyler for receiving the Community Choice Youth Award. Check out the young art phenom’s work here and keep up with McDonald’s community initiatives by tuning into @mcdscene and #365blackawards on Twitter.