Olubunmi “Boomie” Odumade is the lucky winner of the 2014 Chevron PowerMoves.NOLA contest. The co-creater of the fitness app Nexercise won $25,000 to make the app even better.

Odumade enterted the ChevronPower Moves Nola contest in which she and 20 other minority business owners pitched their idea to a panel of investors at our 2014 ESSENCE Festival. Odumade, who is also the Vice President of Engineering at Nexcercise demonstrated why her free app was sustainable and profitable.

PowerMoves.NOLA is a national initiative that provides capital and mentoring to minority entrepreneurs. For three days during our 2014 ESSENCE Festival, 20 minority entreprenurs at various stages of business pitched their respective endeavors to the panel.

Odumade helped build the free app, which is the largest fitness mobile interactive game of its kind. It offers people new ways to stay motivated to lose weight, eat clean and stay in shape — and it allows them to do all of that with their friends.

Odumade wasn’t the only one who won big down in New Orleans. We Are Onyx beauty line co-founder Delali Kpodzo (pictured below) was also a contestant in the PowerMoves.NOLA competition. She was voted crowd favorite and was awarded $5,000. 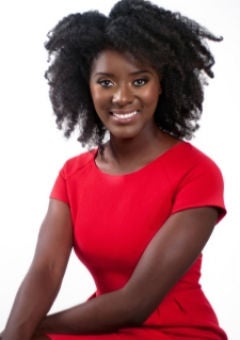 Co-founder of We Are Onyx

Cheers to Odumade and Kpodzo for creating an apps that helps keep everyone healthy and beautuful.