By Dominique Hobdy · Updated October 26, 2020
While tapping influential millennials to represent your brand may seem like a no-brainer — Dolce & Gabbana’s latest runway show proves that the outspoken nature the generation is known for is not just a myth. The luxury Italian brand learned this lesson the hard way when one of the millennial influencers modeling their latest looks, 21-year-old musician Raury from Stone Mountain, Georgia learned about some of the problematic ideas that brand really stands for. No strangers to controversy, the men behind the iconic luxury label, Domenico Dolce and Stefano Gabbana have been called out for questionable clothing and statements countless times. They’ve been taken to task for their use of Blackamoor imagery in their accessories, releasing shoes that glorified being “Thin & Gorgeous”, and calling Gay families “synthetic” — just to name a few. One of their more recent media storms (and the incident that set Raury off) came when the brand decided to proudly dress First Lady Melania Trump and respond to backlash by releasing a “Boycott Dolce & Gabbana” shirt. In a candid interview with GQ, Raury revealed that he wasn’t really aware of the brand’s alignment with the Trump family and when he learned of what he deemed to be a mockery of boycotts, he couldn’t stand by and say nothing. “It was very insulting to know that Dolce & Gabbana was selling all of this millennial, pro-forward shit, but everything that they’re doing and saying is a step backwards. They’re speaking for the 1950s. They’re saying our voice doesn’t matter, and they fuck with Melania and Trump, ” Raury told GQ. The young artist explained that while he was initially excited to be invited to walk in the show, after doing a quick search of the brand, he was disturbed by what he found. “The “Boycott Dolce & Gabbana” T-shirt they created completely makes a mockery of what “boycotting” is. Boycotting is the people’s voice. A protest is the people’s voice. It has power. It changes things. When I came out to Milan for my first time walking on a fashion runway, ever, I was excited. I’m a stylish-ass young kid, but I don’t know everything about fashion. I knew nothing about the T-shirt until I was here. I had already agreed to walk for them.” Springing into action, Raury decided to make a statement during his runway debut. As he walked in the finale, Raury removed his hoodie and revealed black wording sprawled across his chest reading: PROTEST, DG GIVE ME FREEDOM and I AM NOT YOUR SCAPEGOAT. 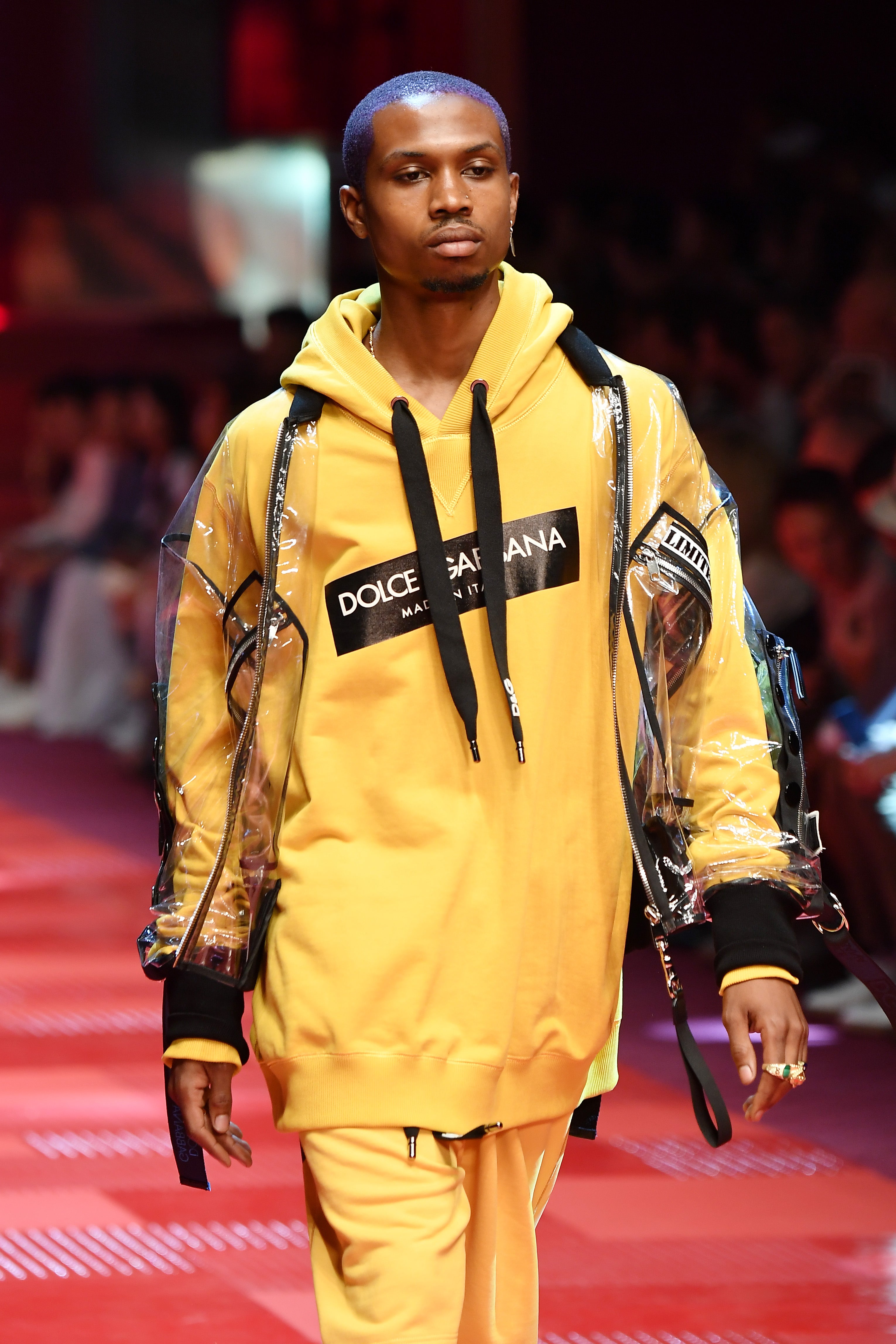 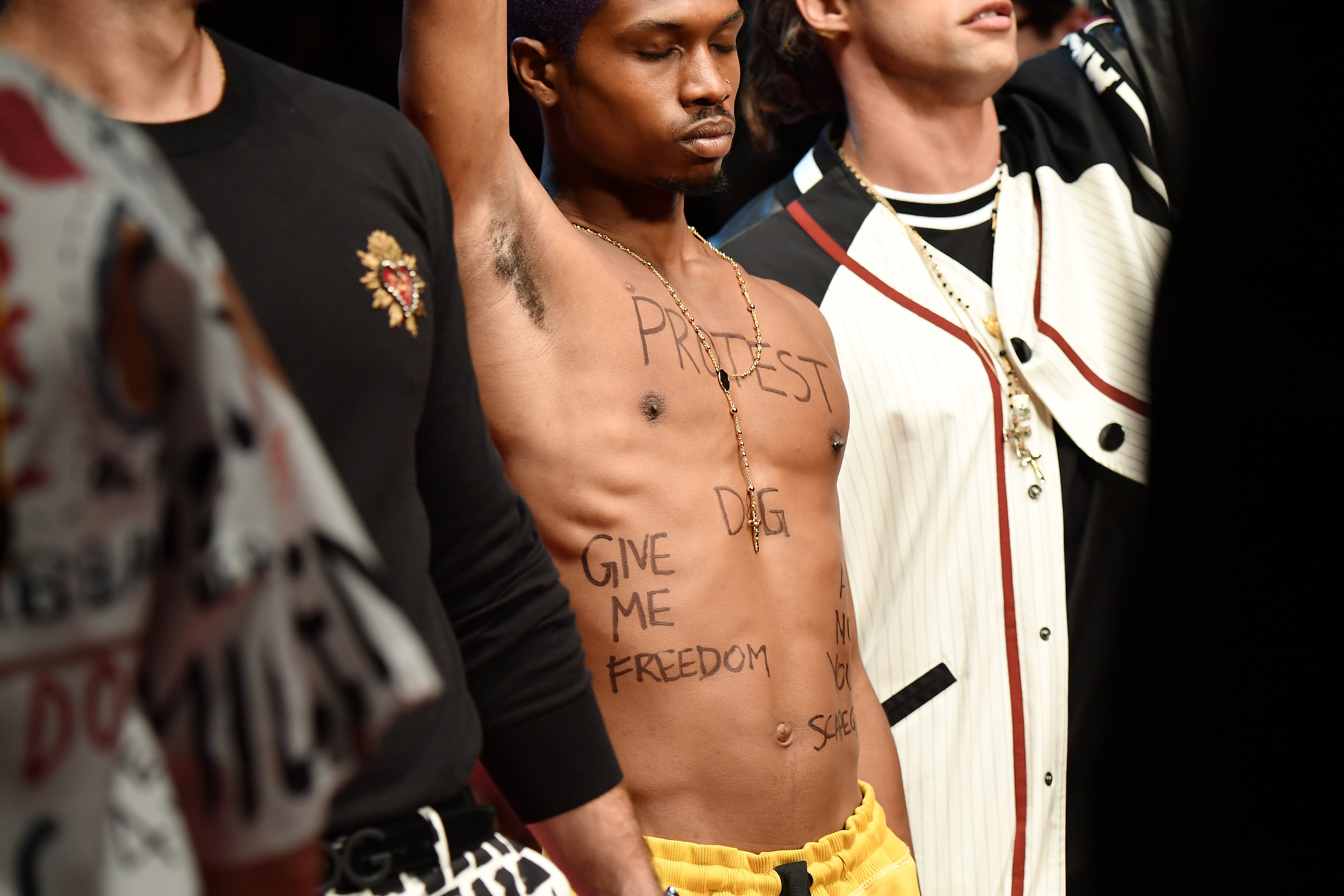 When asked what he meant by the phrase, “I am not your scapegoat,” Raury explained that he felt young, uninformed people were being used to push outdated ideas. “I wondered why I was picked to come out here and support them in a time when they’re going through some heat. So here I am, about to be like, Dolce & Gabbana is cool, but I didn’t know what they had done. And a lot of [models in the runway show] didn’t know what they had done. I felt like Dolce & Gabbana was literally trying to use the youth to wash their hands of any sort of heat from anyone who wants to protest against them.” After staging his protest, Raury disappeared from the venue and left Italy the next morning. He admits that he isn’t sure what this will mean for him when it comes to opportunities in the fashion industry moving forward, but couldn’t stand by idly. Something tells us he’ll be just fine.