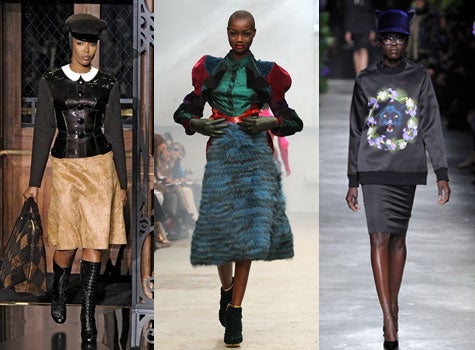 Shows have wrapped on Parisian catwalks, and it’s time to take a look at the season’s highlights. From fetish and 1940’s chic to copious capes, and futuristic silhouettes, we’ve compiled all the top looks from the city of lights.

Louis Vuitton and Givenchy were full of frills that would appeal to those with fashionable fetishes. Marc Jacobs told journalists after the Louis Vuitton show, “”We were thinking about obsession, fetishism, and we thought about an old hotel, with its chambermaids and the affairs that go on there, the crimes and scandals. And we just wanted to reveal all the amazing creatures who passed through there.” He accomplished his goal with a series of hot pants and pin straight skirts, topped off with authoritative jackets and imperial captain’s hats. Model icons Naomi Campbell and Kate Moss walked the show, adding an extra dash of drama. Over at Givenchy, the fetish was more feline, with vampy bomber jackets and seductively shirt skirts playing alongside cat eyeglasses and caps with cat ears.

Capes were were on full display at Chanel and Lanvin, with Chanel offering versions in gray tweed and Lanvin in basic black. The increasingly classic outerwear piece was also seen at Jean Charles de Castelbajac, Chloe, and Christian Dior.