Back in June, I received a phone call to be a panel judge, for this year’s Art Institutes New York Fashion Week event. I attended the show last season and interviewed one of its participants, Kimberly Richardson who is appearing on this season’s Project Runway. When I found out that I was handpicked to help curate who would be presenting their collections this year, I was over the moon. 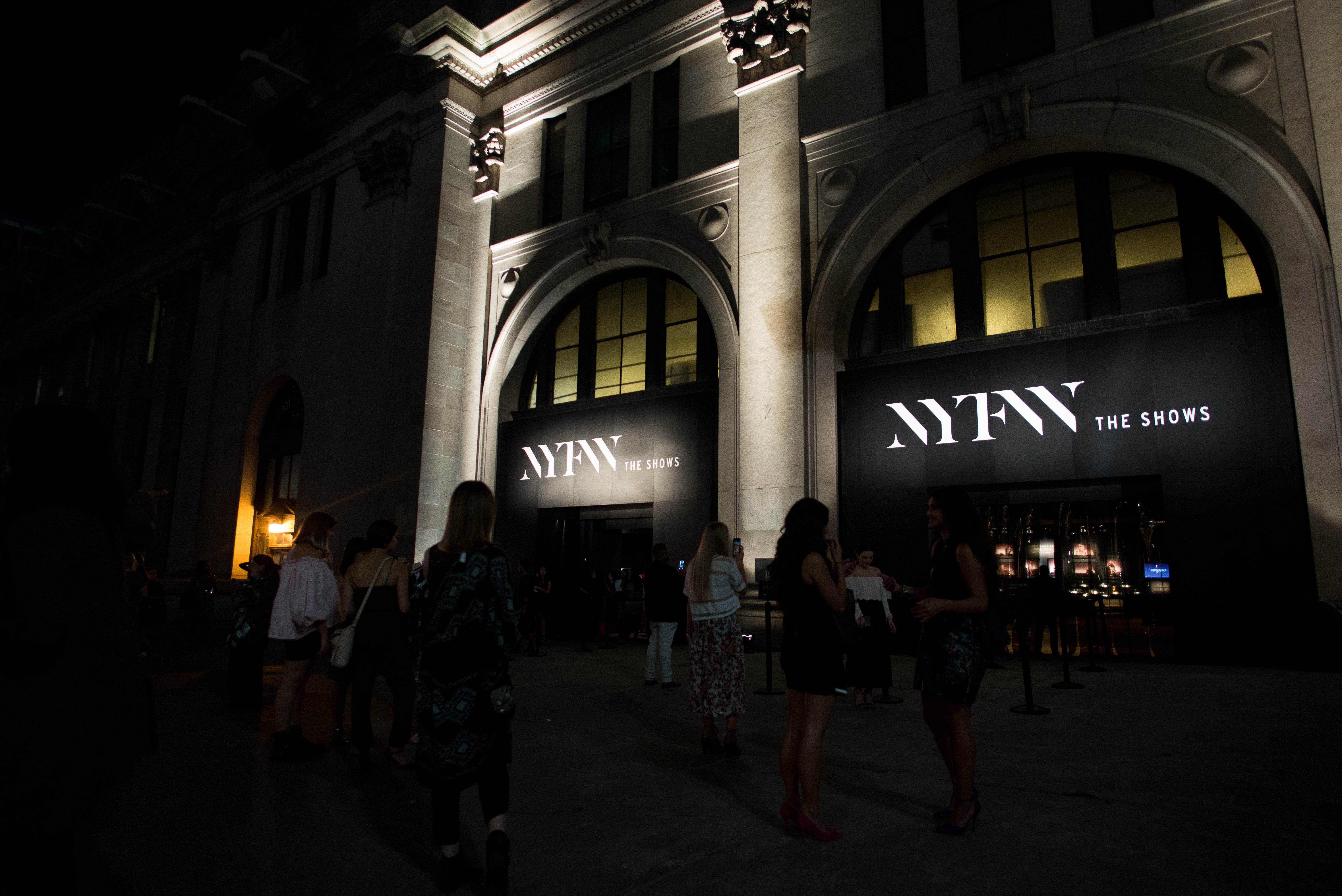 Having studied fashion design in college, and having attempted to launch my own eponymous label, I know first-hand the intricacies and travails of cutting fabric, draping and pattern-making… but my interest eventually swayed towards editing and styling, yet I still have that designer’s eye when it comes to making editorial selects. With that being said, I knew what to look for while being on the judges panel, and I knew that when I saw the developing collections of Adrian Escoto, Esther Ashiru and Julissa Arrington, they had to be a part of this year’s fashion week. 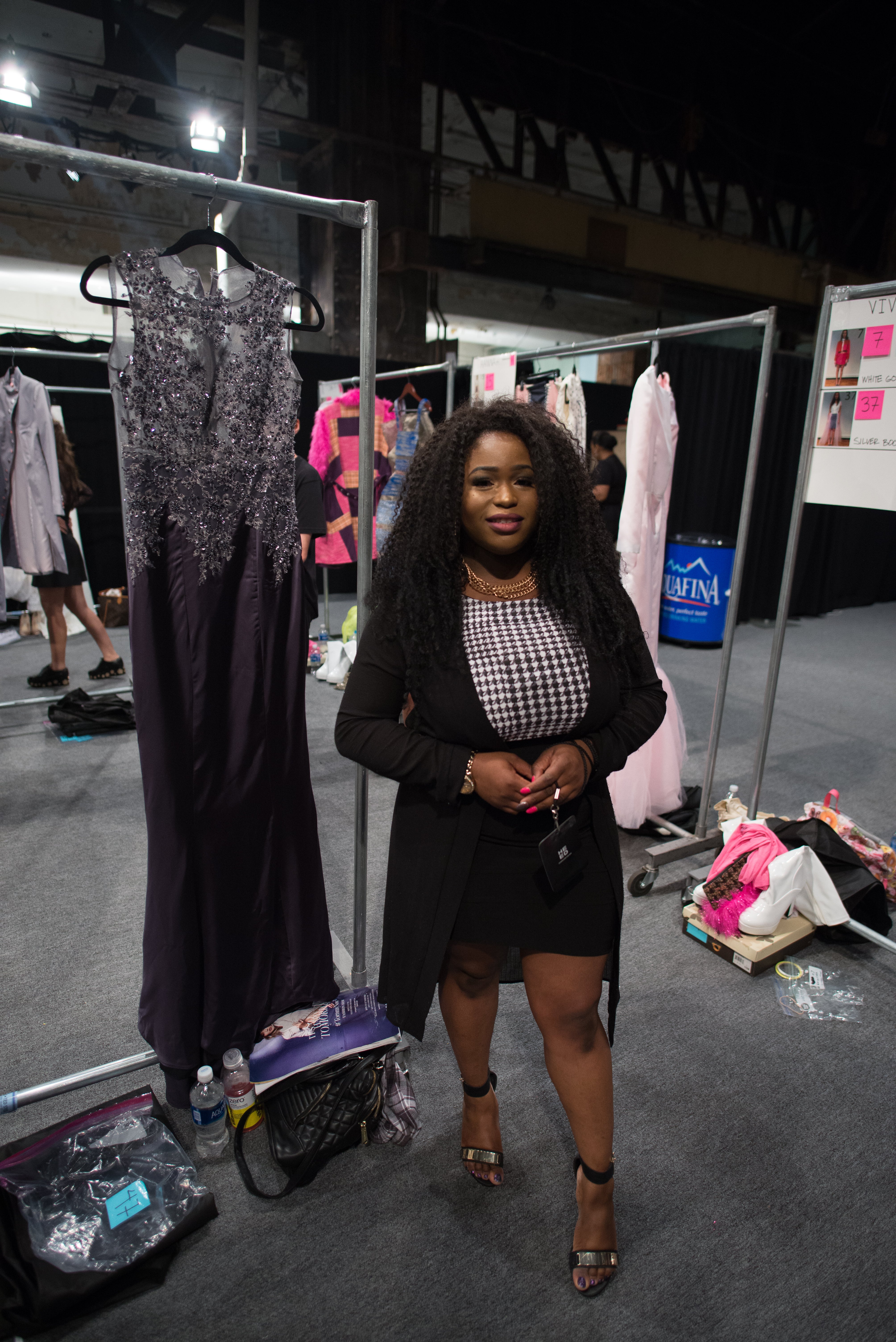 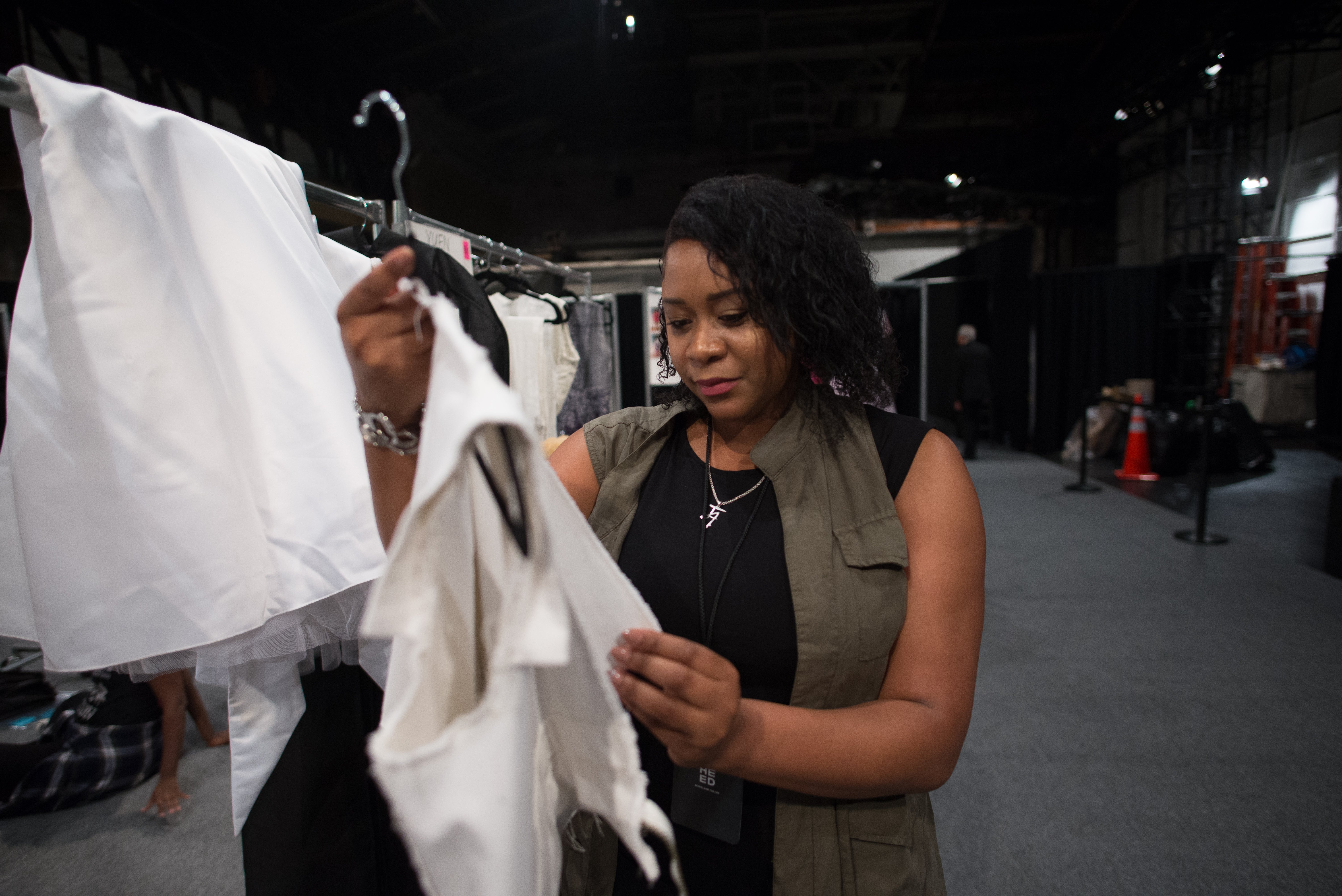 Moreover, what’s a designer garment, without the appeal and realization of a high-fashion, runway model to wear it?! Helping to bring these designers’ visions to life requires a skilled model who can embody the standards of the fashion industry, as well as the aesthetic of the designer. And to my surprise as I was backstage, I ran into the young, up-and-coming model (who also happens to be my sister-in-the-game and fellow Morgan State University alum), Gabrielle Spotwell, whom is still riding a high of having just performed on-stage with BEYONCÉ at last week’s epic VMA’s, and BET’s “How To Rock Denim” (a few weeks before that)! Escoto, a New York native, presented a patchwork denim collection, of which he says, “Each piece is an individual pattern, with different weights and different colors — inspired by the women of New York City. The denim shows the durability and toughness of the New York woman!” He’s been designing for two years and had NO prior fashion experience! Of his ascent to being on the NYFW runway, he states, “I was so overwhelmed. I never touched a sewing machine before.” But yet, here he is. 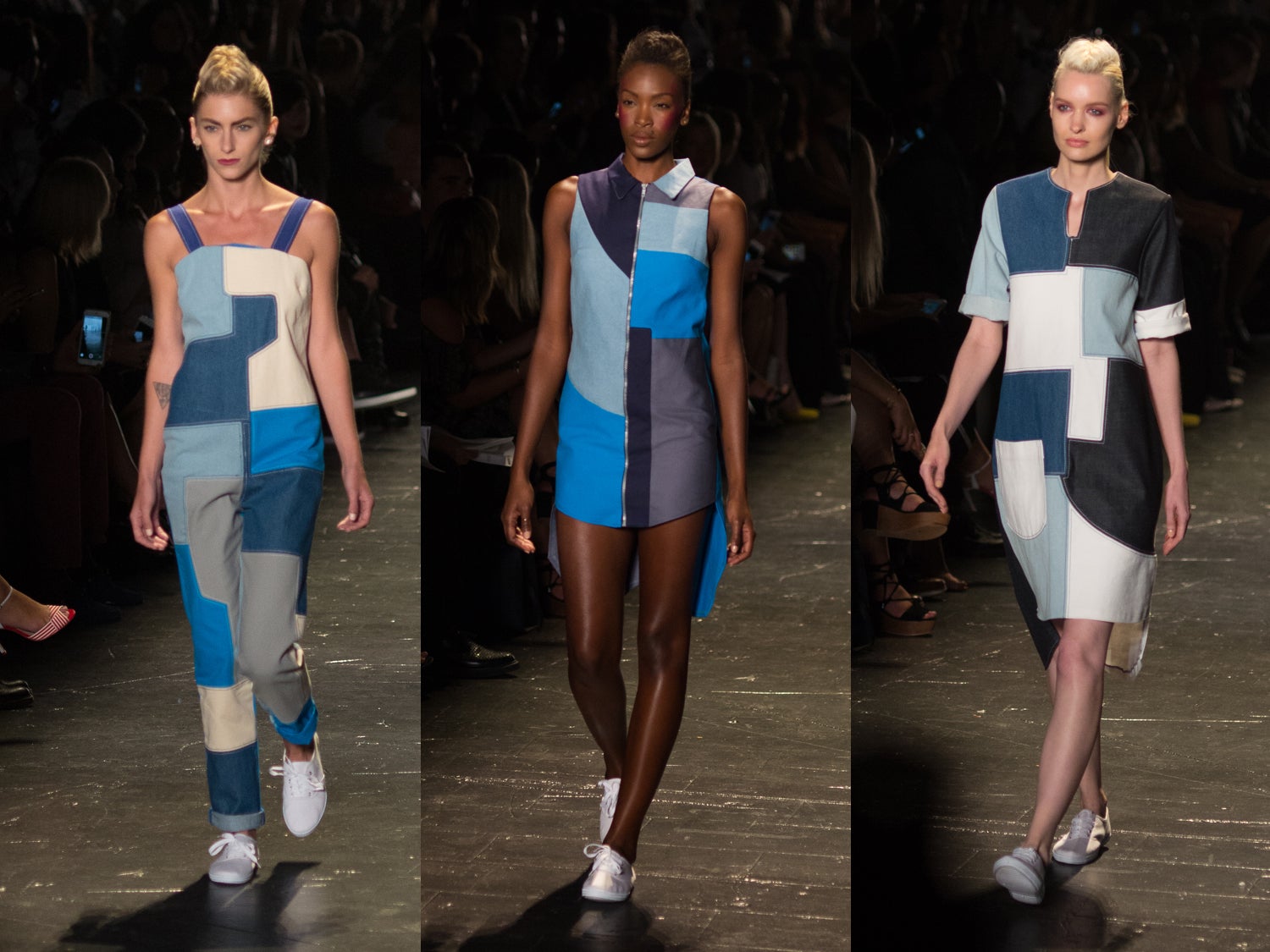 Ashiru, who hails from Canada by way of Nigeria, gave us life with her evening wear and haute couture creations. She’s been designing since 2013 and regularly shows her collections outside of school. “Most of my collections are beaded and hand-sewn… takes me at least two-weeks… about 10 hours [per night] to create each design,” she says. She further states, “I plan on working more in couture, before [fully] launching my own collection.” Her designs draw inspiration from all over the world and look just as ornate and over-the-top as her favorite fashion designer, Michael Costello’s collections.

Arrington (a Houston, Texas girl), showed us what ‘deconstruction’ is all about. Having started her passion for design 10-years ago (right after high-school), she didn’t take her dream seriously until last year. Attending the Art Institutes in San Francisco, she says that her collection “…is a journey of the unraveled mind. A relationship of the mental institute and the nurse; it’s like, who’s really crazy, the nurse or the patient?” She used natural fibers like cotton, silk and linen for a minimalist approach with distressed details. The all-white color palette plays up to her theme and allows consumers to really ‘get-in’ to the pieces! 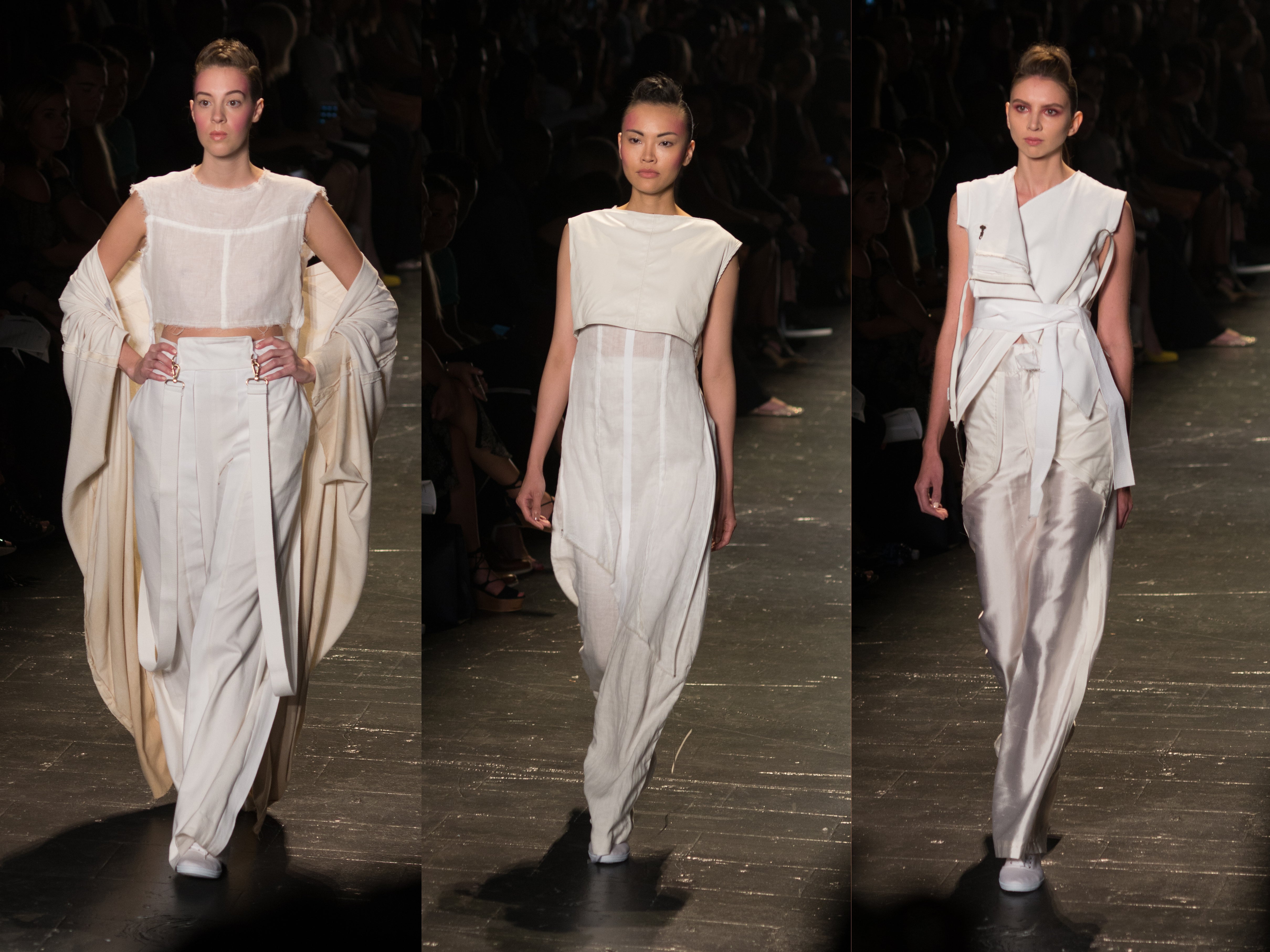 Spotwell and I, were members of MSU’s campus organization, FAM- Fashion At Morgan, where we both served on the executive board, and it was through FAM, where she learned the techniques of model posing, runway walking, professional communication skills and overall stage presence. With this being her fourth season of walking in NYFW shows, she says:
“It started off really rough [because] I didn’t have an agency, coming up here from Washington, DC. But I just had to network and get to know people… and every fashion week I excelled and did better, and got better shows… all the way from the last NYFW at Lincoln Center to the new locations.” In addition, ever since working with June Ambrose (for BET’s denim event), she’s been branded by the industry as the next, Pat Cleveland (because of their uncanny resemblance). Of the comparison, Spotwell says: “She’s my idol, I love her. She has paved the way for so many Black models.” 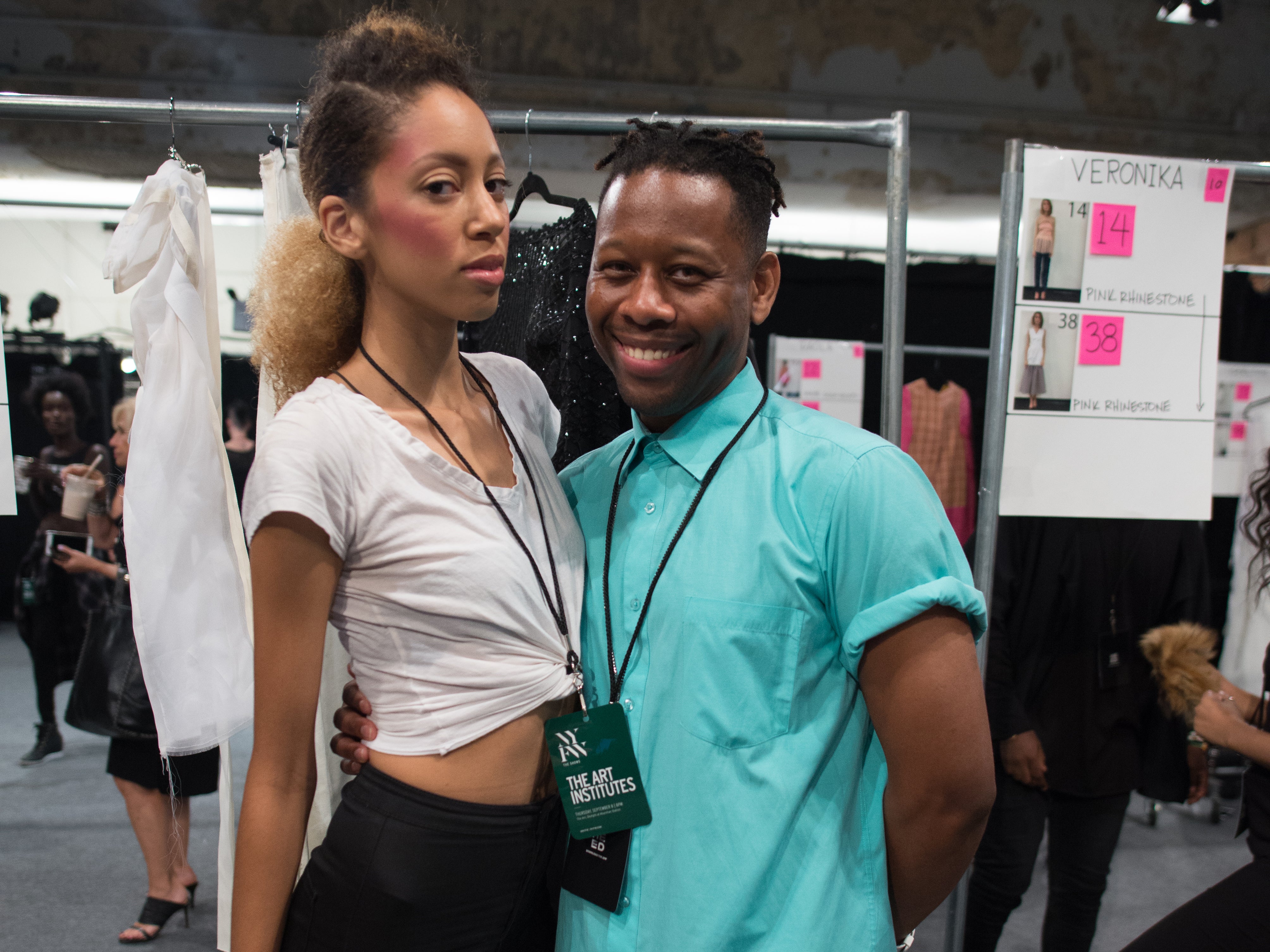 Well, there you have it folks, fashion dreams do come true. And for all my student designers out there, it’s never too late to start stitching together your goals!