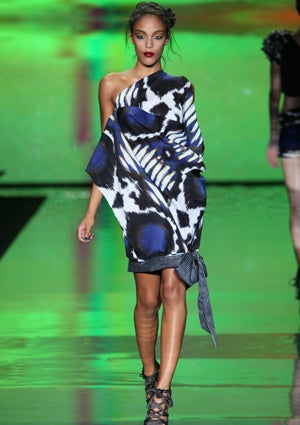 Lamb September 17, 2010 Legendary British designer Vivienne Westwood and Africa are just about the last concepts we thought would intersect. And then we saw Gwen Stefani’s Spring 2011 collection. It was as eclectic as you can imagine. From the first two looks, which featured feminine frilly dresses crafted from traditional African textiles, it was clear that Stefani was looking to the continent as her main source of inspiration. The theme popped-up consistently in the forty-seven looks she showed on her runway. Injected into the mix was the classic plaid prints favored by Westwood in previous collectons! Stefani used them in pants, jackets and complex tops. Just liker her songs (which were playing at full blast) the collection was fun and entertaining, but the volume needed to be turned down — a lot. Stephen Burrows September 17, 2010 Stephen Burrows once famously said, “…I think fashion should have a sense of humor, and I want people to be happy in my clothes.” That ethos was plain to see in his Spring 2011 collection which featured a burst of lush colors in comfortable jersey and cotton fabrics. The shapes of his pieces were just as chic and easy; high-waist wide-leg pants, dresses and oxfords. The theme of exuberance was seen in the patterns he chose as well, psychedelic swirls which echoed the iconic designers rich 70’s heritage. And if all that didn’t convince you that fashion is joy, the dazzling smiles of the models (the brightest on any catwalk we’ve seen this season) should do the trick. Mission accomplished.

Isaac Mizrahi September 17, 2010 It wasn’t so much about ladies who lunch, as it was ladies who launch at Isaac Mizrahi’s Spring 2011 show. His woman is elegant, chic and charming. But above all, she seems to boss and leader, whose business savvy  affords her the sartorial freedom to present conservative looks — with a twist. For this season, that twist comes in the form of Trompe l’Oeil (literally meaning trick of the eye). Unbuttoned collars and stiffly ironed necklines weren’t, in fact, real at all. Instead, it was a playful print expertly applied to the silks, chiffons and jerseys that floated down Mizrahi’s runway. While these classic clothes with a quirky twist will reflect the personal style of just about any woman — and beautifully so — they are ultimately more reflective of the designer himself.