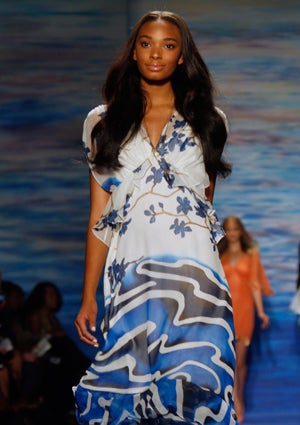 Tracy Reese September 14, 2010 She’s out of her sentimental mood! After several seasons of ultra soft and feminine dresses that floated on her catwalks, Tracy Reese has moved on to edgier pastures. Her Spring 2011 left us surprised – and elated – with its sharp departure in look and feel. Out was the whimsy decor in seasons past and in was a smoother, sleeker setting which perfectly displayed her new mood; bold patterns, crisp tailoring and the sexiest silhouettes we’ve seen thus far. We’re still drooling over the body hugging black dress with dangerously low neckline.  But that’s not the only one. This season, we’re in love with all of Reese’s pieces. Barbara Tfank September 14, 2010 Another one of Mrs. O’s favorites,  Barbara Tfank is known for her conservative, chic dresses. She did this reputation justice with her series of fifties inspired, knee-length dresses with cinched waists and modest necklines. Her eighteen- piece collection was crafted entirely in silk crepes and taffeta’s in a variation of  bright classic prints and bright sorbet colors. The overall effect echoed the designers current mood: optimistic. In a season where baring all in sheer tops, pants and dresses has been all the rage, Tfank’s conservative designs might feel like a gamble. But clearly one that pays off well. Mrs. Obama would approve.

Marc Jacobs September 14, 2010 The lady is a vamp. A seventies loving, vacation going, body-baring vamp. That, in a nutshell, describes Marc Jacobs’ woman this season. His Spring 2011 collection was a bold, lush, innovative, lux homage to a modern woman living in this bygone era. From the belted, retro-style jackets that opened the show to the floor sweeping sheer day-gowns to the awe-inspiring over-sized bows that accented the pieces at the end of the show,  there was everything to love about this collection. But we’re not surprised. She might be a secretary one season and a vamp the next, but the Marc Jacobs lady will always be consistent.