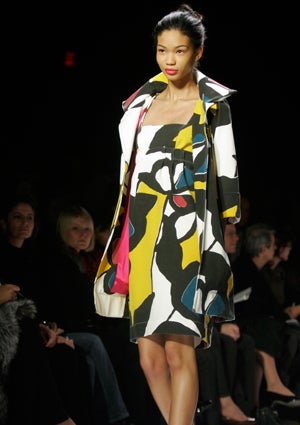 Diane von Furstenberg September 13, 2010 If there’s one recurring attribute we’ve noticed about the Diane von Furstenberg woman, it’s that she’s always on a journey. This season it was less about that destination, and more about how she planned on getting there: in style. The hooded jumpsuits in rich colors, knee-length dresses in ethnic prints, and chic, easy separates epitomized the DVF woman: cool, confident, energetic and on a mission. Even her accessories, over-sized explosions of material, color and previous seasons exhibited a new cool and restraint that supplemented — and complemented — the runway presentation. The renewed energy can be credited to Von Furstenberg’s new co-designer, Yvan Mispelaere, formerly of Gucci. His youthful sophistication combined with DVF’s iconic heritage confirm that this journey will be worth taking for many seasons to come. Tom Ford September 13, 2010 Tom Ford clearly knows how to orchestrate high drama. From his star-studded Gucci fashion shows in previous years to his Oscar-nominated film, “A Simple Man,” his penchant for the sexy, sophisticated and slightly theatric has been his trademark. So when it comes to debuting his first women’s collection under his Tom Ford brand, it only makes sense that those adjectives would still apply. Veiled as a cocktail party, his Spring Summer 2011 presentation was an exclusive affair attended by a small group of fashion editors and celebrities. They were in for a treat: Beyonce Knowles, ageless beauty Lauren Hutton, actress and wife of Tom Hanks, Rita Wilson, and the buzzed-about model, Chanel Iman, wore a dazzling selection of gowns and crisp pantsuits from Ford’s new line, which will be available in Spring at Tom Ford boutiques worldwide.

Cathrine Malandrino September 13, 2010 There was fantasy — and something fragmented  — about Catherine Malandrino’s Spring 2011 presentation which took place yesterday. Her pieces, draped on models perched like statues high above platforms in the Grand Promenade of Lincoln Center, varied from edgy to elegant. From delicate empire waiste gowns, to gritty black hot pants (topped off with thigh-high gladiators), each look presented wildly different versions of the Malandrino woman. But that lack of consistency proved one evergreen point about Malandrino and her pieces: her woman, no matter what form she takes, always knows how to pull together a stylish look.