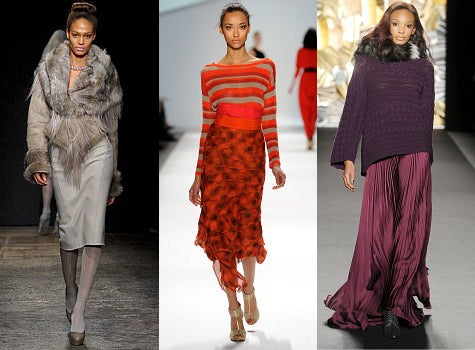 It might have been Valentine’s Day, but the only romance on display was that between designers and the editors who love them. There was lots of affection as the press cooed over media darlings like Tracy Reese, Marc Jacobs, Betsey Johnson and Carolina Herrera.

So what trends did these heavyweights and others send down the runway? To start with, a bevy of beautiful pleats. This trend was on full display at Tracy Reese, where the designer debuted pleats in a plethora of purples and bright blues. Coats — which have almost seemed like an after-thought this season — got their full due on several runways including Herrera and Donna Karan, who sent a sumptuous, belted, fur version down the runway. But the star of the day? Plaid prints! From small to large, and colorful to black, this fall friendly print was rampant on the runway.

We predict more of it in Day Six of New York Fashion Week. Log back on to see if we got it right!