The Fashion Spot has released their much anticipated fashion week report and the results are a mixed bag of interesting, alarming and hopeful findings.

Despite a huge push for awareness surrounding inclusion leading up to fashion month, there still seems to have been some pitfalls when it comes to models of color being overall represented.

That may not seem like a high percentage but it is one of the highest there has been, marking what we hope will be a growing trend while simultaniously exposing an issue that continues to plague the fashion industry.

When it comes to Black models alone, they made up 10.33 percent of models that walked throughout fashion month.

Overall, 7 out of 10 of the top models for the month were white. 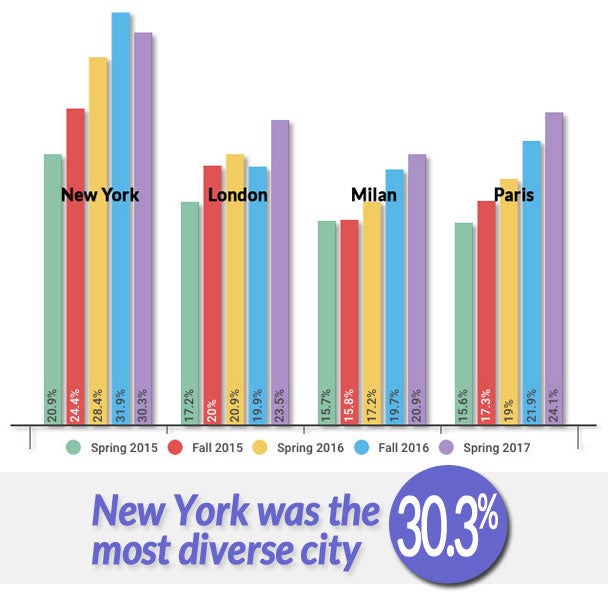 Kanye West’s much anticipated fashion show may have received much backlash for its questionable casting call, but the truth is that he takes the cake when it comes to diversity. Yeezy Season 4 proved to be the most diverse show of the entire season in any city with 97% models of color, followed by Kimora Lee Simmons, Ashish, Brandon Maxwell, and Telfar.

Perhaps what sticks out more are the shows that somehow managed not to cast a single model of color. Including Mary-Kate and Ashley Olsen’s celebrated womenswear brand The Row, along with other designers such as Mila Schön, Daniela Gregis, Anrealage and Junya Watanabe.

This is a repeat offense for the Olsen’s line which saw just one model of color in it’s spring 2015 show.

As far as size, age and gender diversity are concerned, there weren’t quite as many improvements. Sixteen plus-size models walked in New York, however we saw none in Paris, Milan and London. Ten transgender models appeared in total. However, according to the report, “women age 50 and above turned up on more runways this Fashion Month than in any other season in recent memory.”

So the real question after digesting all of this information is, why should I care? And the answer is one that we’ve come across time and time again – representation. 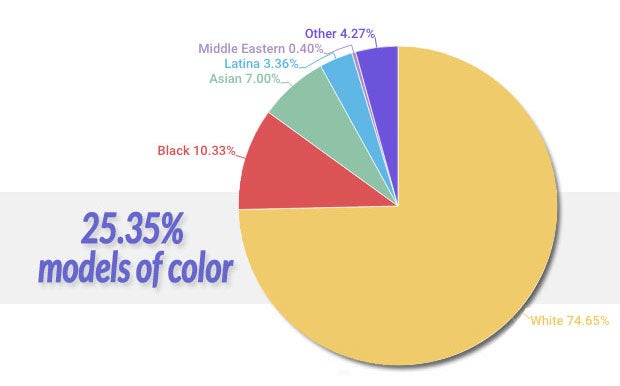 In an industry where Black people and particularly Black women account for a large portion of sales, it doesn’t seem like too much to ask to be included in the process of fashion prior to swiping our cards at the counter.

If we aren’t paying attention to the opportunities that models of color are or are not receiving, we’re saying that it’s ok for our children not to see representations of beauty that they can relate to on runways and ultimately in the pages of the magazines.

Our beautiful Black legends like Naomi Campbell, Tyra Banks, Pat Cleveland and so may more paved the way for the young women in the industry now, but who will be next and who will represent Black beauty in the fashion industry if we continue to be excluded?

As usual the fashion week report reveals that although progress is being made there is still so much work to do.