After its record-breaking opening weekend, the film has continued to dazzle audiences around the world, raking in more than $1 billion at the box office. While many fans are still on a high from their trip to Wakanda and are happily planning to return to the mythical African nation when Avengers: Infinity War is released in April, there’s one scene-stealing performance that people are still talking about.

Though he’s been acting for years, Winston Duke mesmerized audiences with his commanding, yet humorous, portrayal of M’Baku, leader of the Jabari Tribe. At six-foot-five and 250 pounds in the film, M’Baku doesn’t fit Hollywood’s traditional definition of a leading man, but many Black Panther fans were drawn to the Yale School of Drama grad’s performance. Dubbed “Mountain Bae” and “M’baeku”  by some fans, Duke’s standout depiction of the fierce warrior even sparked the  #MbakuChallenge. .

The 31-year-old actor said the whole thing caught him off guard. 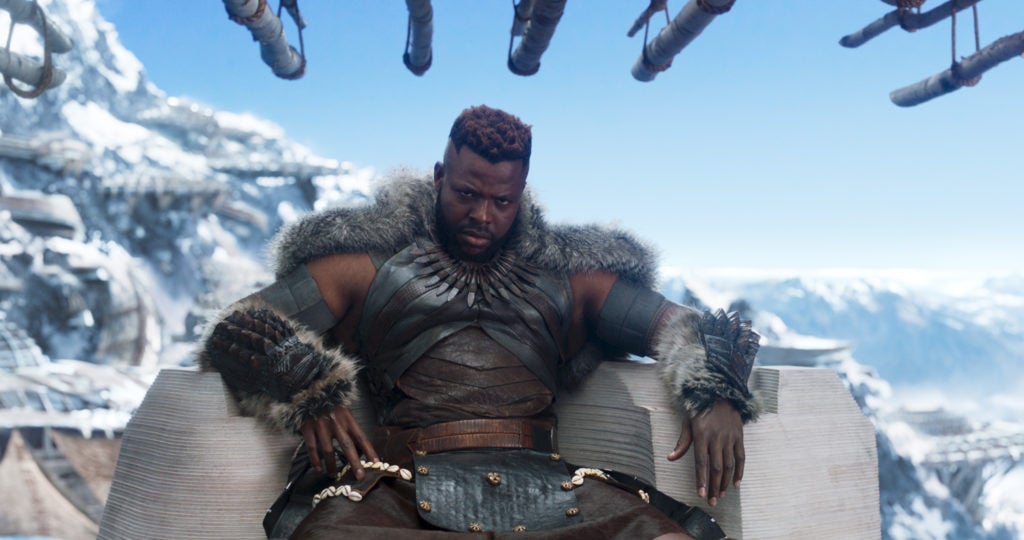 “At first, I was really blown away by it, and then I started being like, ‘Maybe I am really sexy, this is really cool,” he tells ESSENCE, “I started feeling myself, but then I stopped and pulled back. I started reading the comments because I wanted to understand what’s going on.”

But the Trinidad and Tobago native says the reaction to his Black Panther performance was driven by more than just his good looks.

“I started to realize that what people were reacting to wasn’t me,” he explains. “What they were reacting to was a feeling of deficit when it came to images that they could consume in the media. A tall, broad-shouldered man with dark skin and a gap tooth—I wasn’t the image of ‘old Hollywood beauty.'”

Moreover, Duke says fans were attracted to M’baku because he “was a Black man who isn’t playing into any kind of respectability politics in the film” and he was more than just a formidable combatant or challenger to T’Challa ’s throne. “It’s opening up a new space for how we define, what is beauty—what’s beauty and what’s sexy and what’s alluring.”

Despite being a classically trained actor, Duke admits having to deal with being typecast because of his brawny stature.

“My experience before [Black Panther] felt incredibly limited when it came to the type of opportunities I was engaging with,” he confesses. “I was always relegated to the muscle—who was non-thinking and just a tool to be used by someone else—an athlete, or a bad guy who was bad for no reason. There wasn’t a lot of nuance offered with the characters.”

Prior to Black Panther, Duke appeared on a handful of TV shows, including CBS’s Person of Interest, NBC’s Law & Order: SVU, and ABC’s Modern Family. He says he agreed to take those opportunities because even though they fell within how people saw him (big and Black), he was allowed to “do something different” with each character. After playing such a layered and multi-faceted character in Black Panther, Duke hopes to continue to play nuanced characters.

“I need to not be typecast as big, Black and dumb, but be seen as an intelligent, witty, bold and charismatic person,” the actor says. “We need more opportunity to see more characters that have a fresh level of expression and that can only come–not just from me–[but] from people in positions of creative and financial power to support films and support films with characters who are multi-dimensional.”

“I want all of the work that I do to have a social justice footprint attached,” he adds. “I want it to move the needle forward when it comes to the perception of all people, but especially people of color.”