By Britni Danielle · Updated October 23, 2020
The Writers Room is a series that highlights women writers in television and film, who are making waves and creating projects that are built on inclusivity and visibility. Ester Lou Weithers always knew she wanted to work in the entertainment business; she just didn’t know in what capacity. But after watching the critically-acclaimed political drama, The West Wing, Weithers found her calling: Writing. “I decided I’m either going to be (West Wing writer and creator) Aaron Sorkin or I’m gonna be Sam Seaborn, who is the speech writing character on the show,” Weithers tells ESSENCE. Committed to her new goal, the Florida A&M University grad packed up and moved to New York City to pursue her dream. But there was just one problem: While New York is an entertainment hub, it wasn’t the right city to flourish as a TV writer. “I had no idea that the base for that was in L.A.,” the Houston native, raised by Caribbean immigrants, admits. “I kind of played around — reading books about writing and attempting to write scripts — but I didn’t really focus on it until my third job at a cable network, where I was an assistant and I was completely unhappy.” 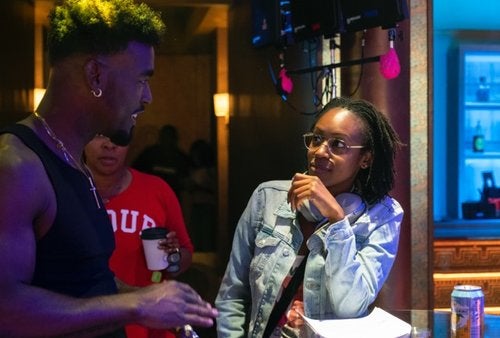 Ester Lou Weithers and Luke James on the set of 'Star'

During this time, Weithers came across Robert McKee’s tome, Story, which breaks down how to tell a compelling narrative. Now better armed, Weithers became serious and threw herself into becoming a better screenwriter. “At the time I was working as an assistant at Nickelodeon, but we didn’t do a lot of development in New York, most of it came out of LA,” she recalls. “And it just got to the point where I was a horrible assistant. These people were asking me about conference rooms and travel, and I was trying to find Shonda Rhimes’ scripts online.” Ultimately, Weithers decided to take a cross-country leap of faith in 2011 by quitting her job and moving to Los Angeles, where she landed a gig as a production assistant to a writer for the Showtime series, House of Lies. There, the showrunner allowed her to sit in on the one place where she needed to be all along — the writers’ room. “I was completely hooked,” she recalls. “I was like, ‘This is it, this is definitely what I want to do for the rest of my career.’” After creating two web series that were acquired by BET, Sexless and Chef Julian, Weithers was accepted into Fox Writers Lab. After doing a stint in Pitch’s writers room, Weithers was tapped to become a staff writer on the popular Fox drama, Star, where she’s been the last two seasons. Still, her rise through the scribe ranks hasn’t been a straight shot to the top. Recently, ESSENCE caught up with Weithers to discuss her writing career, overcoming adversity, and her advice for other women looking to follow in her footsteps.

I've been zoned out of the digital realm and zoned into my writing lately but the original #professionalplusone had to step out to support @yvonneorji at the #naacpimageawards banquet tonight. Favorite quote of the night: "We will fight until hell freezes over and then we will fight on the ice." ✊🏾 👗ester lou's closet 💄@s_milan

ESSENCE: In the writing business — particularly in Hollywood — you have to not only deal with a lot of rejection, but sometimes when you think something is going to happen for you, it does, but then it gets canceled. How do you keep going after disappointments? Ester Lou Weithers: Well, it’s definitely a lot of tears, because you’re like, “If this one thing can happen, that will open all these doors and I will get to where I want to be.” But I think at the end of the day, what’s allowed me to be sane and to always push forward, is the idea that God is intentional. So, everything that happens, happens for a reason. So if something doesn’t happen, it’s because that wasn’t the right fit for me, or I thought I was ready but I wasn’t ready. At a certain point you just have to learn to let go and trust that if you keep working, the right door will open, at the right time. When you moved from Florida to New York, and later to Los Angeles, how did you balance your need to make money with your creative life?  For me, it was a little bit different because I spent so much time in New York doing things that were nowhere near my passion. By the time I got to L.A., I was burnt out. I was like, “If it’s not what I absolutely want and love to do, I can’t do it.” When I came here I was clear: I told myself I’m only working in the entertainment industry. That was a financial risk because the jobs that will get you in the door are not jobs where you’re going to be comfortable.

It’s just a matter of deciding how uncomfortable you’re willing to be.

I couch-surfed for about two or three years. When I was working, I would rent a room. When I was not working, I would be on a friend’s couch and that was mad uncomfortable. Most of my things were in my car that I bought from Craigslist that had two door handles that were broken. I ate at Trader Joe’s. I think all I could afford was like peanut butter and jelly, eggs, and salad. I just lived way below my means, because it’s more important for you to have the right job, than for you to have a nice apartment. And I know for some people, that’s going to be like, ‘What? I’m out, I ain’t doing that.’ And that’s cool because there are people who’ll be like, ‘Okay, I understand it, I get it.’ And those are the people who are gonna be able to take advantage of the opportunities that will allow them to get in the door. It’s just a matter of deciding how uncomfortable you’re willing to be. And I think the more uncomfortable you’re willing to be, the faster you will see results in terms of making strides in the area you want to be in. 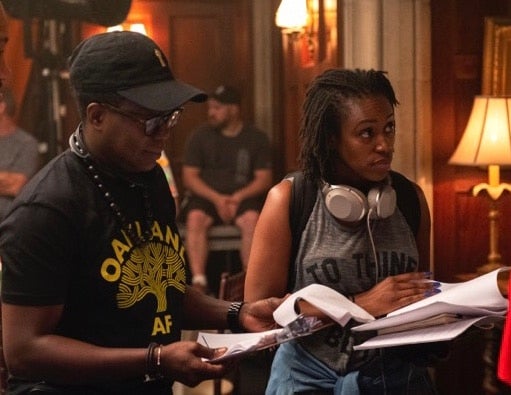 Ester Lou Weithers on the set of 'STAR' with director Cheryl Dunye.

Take us inside Star’s writers room. What it’s like to write for a super popular show that stars Queen Latifah? The first time I went on set and we had to talk about a scene I definitely had a moment. I was like, ‘Latifah just asked me about my script. Wow! Okay, yeah, yeah, yeah. All right, cool. Stay cool Ester, stay cool.’ But it’s a great opportunity to work on this show, mainly because we have such an amazing room. We have a very diverse room. I work with more than a few Black women, which is rare. So I’m extremely fortunate to work with people who, on one hand have similar experiences to me, but on the other hand have varying backgrounds from me. You know, all Black people aren’t the same. We don’t all come from the same places. So for us, at Star, it’s really cool to be writing for strong Black female characters, to be writing for characters that you don’t see very often on television — rans, gender fluid, openly gay Black men in relationships. All of that is super cool and amazing.

Morning photo shoots w/ Naija Leibovitz aka @yvonneorji. I keep telling her I'm a writer not a model, but she don't listen...thankfully. 👌🏾

What advice would you give, especially to women, trying to break into writing for TV and film right now? We’re in a very special time right now, where people are — for whatever reasons — interested in what we have to say. This is the time to be bold. I’m a big proponent of everyone in the creative space, expanding the spectrum of Black images, female images, immigrant images — just every image possible. Definitely be yourself because that only broadens who we are onscreen, and I think this is such an amazing time that we have the opportunity to do that. When I first moved to L.A., I was definitely writing maybe a hint of Blackness into my scripts or a very generalized Black experience. Now I’m at a place where I can write specifically Caribbean-American immigrant characters because that’s what I am.

My second piece of advice would probably be to look at the big picture. I’ve recently run into a lot of people who are looking for one way into the business, and if they don’t have it that particular way, they’re not willing to entertain any other options. I think that is sad because there are a gazillion-in-one ways to make it in this town. And you should always look at the big picture. For Black women specifically, I want to choose my words carefully: Just understand what you’re up against. Barriers are still being broken, doors are still being knocked down, trails are still being blazed. So, be excellent, that always helps. But then also work hard and do the extra work, because we are not afforded the same grace as other groups of people. If you are always on top of your game, I’m not going to say it’s going to be perfect, but it’s definitely gonna be easier. And because we are in that time where so many Black women are doing so many amazing things, if you come into the game, being excellent, working hard, kicking ass, being yourself, you’ll be recognized by other women who have gone before you, and who are more established, and they will help lift you up. But you’ve got to come into this thing ready to be the best that ever did it.
TOPICS:  Ester Lou Weithers The Writers Room