By Rachaell Davis · Updated October 23, 2020
A packed crowd from the balcony to the floor was on hand in Harlem as the Apollo Theater celebrated super-producer, singer, songwriter, rapper, and dancer extraordinaire, Teddy Riley on Sunday. Click HERE to get tickets for ESSENCE Festival 2019, celebrating 25 years of moving the culture forward! The official “New Jack Swing Day” kickoff began with a presentation from Apollo Theater executive producer Kamilah Forbes, who presented Teddy Riley, Keith Sweat, Damien Hall and Kool Moe Dee with the keys to the city of Harlem before an intimate gathering of family, fellow artists and fans just outside of the historic venue on Sunday morning. 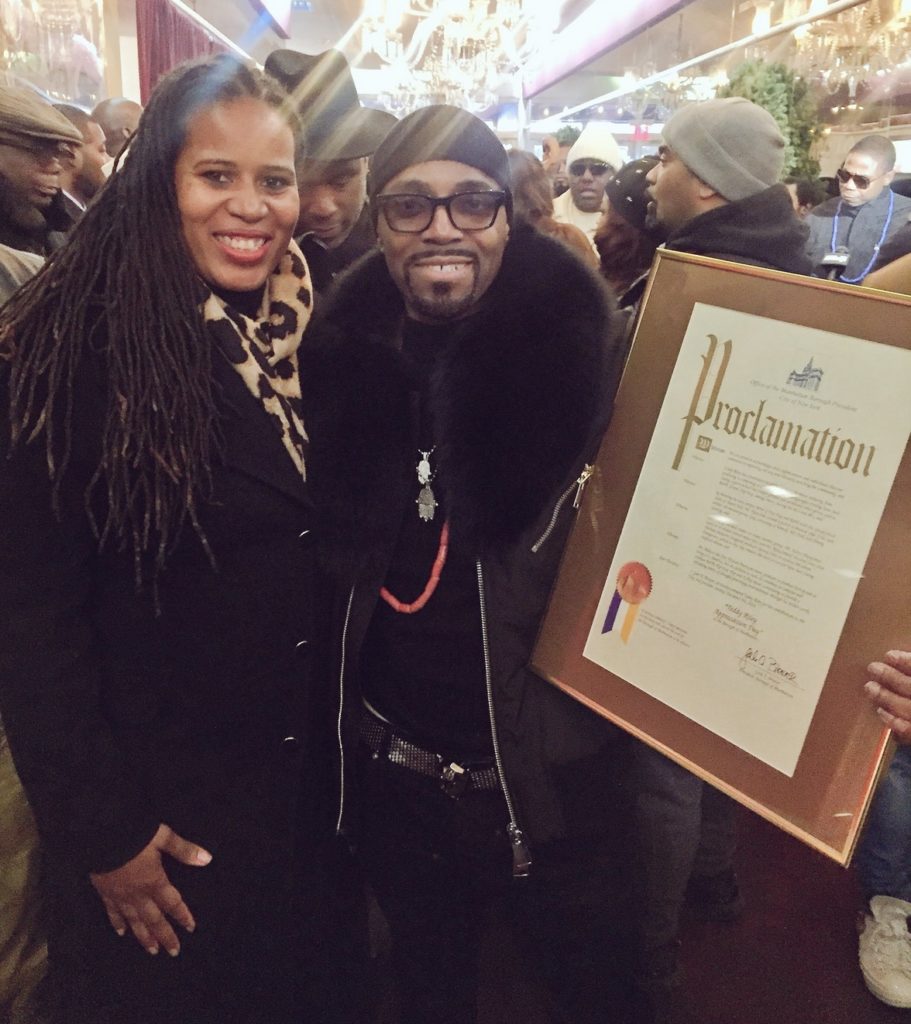 “For 85 years, the Apollo Theater has been a space for Black excellence and American cultural innovation,” Forbes said. “And everyday we strive to celebrate the contributions that African-American artists have made on global popular culture. So it is fitting that we take a minute to mark 30 years of the enormous impact of the New Jack Swing sound and celebrate Harlem’s own Mr. Teddy Riley, the architect behind the New Jack Swing sound.” Returning to the most iconic stage in his hometown on Sunday evening for two star-studded homecoming shows that proved as equally emotional as they were entertaining, Riley put on a spectacular performance with a little help from the “Kings & Queens” of the New Jack Swing era— along with a few surprise guests.

After opening the show with a quick solo set and giving the crowd a brief history of the New Jack Swing sound that has revolutionized the music industry for 30 years, the man of the evening set things in motion. Among the first to touch the stage after Riley was R&B crooner Al B. Sure, who first made his mark on the music scene in the late 80s. Sure’s set included a brief snippet of Jodeci’s “Forever My Lady,” which was inspired by his relationship with the late Kim Porter while she was pregnant with their son, Quincy. “So you’re having my baby, Kim you mean so much to me,” Sure sang after making his way to the stage. After running through a set that included his breakout singles like “Night and Day” and “Rescue Me,” the proud Mt. Vernon native thanked fans for their support in the wake of Porter’s untimely passing last month.

A few sound issues proved no match for fans, who sang along to every word as Kool Moe Dee and MC Lyte later took the stage, followed by SWV, who brought classics including “So Into You,” “Weak” and “Right Here (Human Nature Remix).”

The crowd remained on their feet and sang even louder as Riley returned to the stage with his fellow Blackstreet group members, including original member Dave Hollister, to run through their catalog of hits including “Don’t Leave,” “Before I Let You Go” and “No Diggity.” Shortly afterward, none other than R&B hit maker Keith Sweat graced the stage and yet again had the audience singing along to a host of his classics including “Just Got Paid” and “Nobody.”

Additional special guests and veteran Hip Hop and R&B heavyweights who took the stage included, Guy, Queen Peen, Doug E. Fresh, Lil Vicious, DJ D Nice, and more. In a year that saw Riley light up the ESSENCE Festival stage, be inducted into the 2019 Hollywood Walk Of Fame class, and continue adding to his already-impeccable music legacy, the day proved the perfect way to close out a phenomenal year. If you missed the Kings & Queens of New Jack Swing at the Apollo, you can catch the replay HERE.
TOPICS:  MC Lyte Teddy Riley