By Keyaira Boone · Updated December 6, 2020
Rick Ross is ready to reveal how he went from a struggling son of the 305 to a music and fast-food mogul. The head of Maybach Music Group announced that he is working with Neil Martinez-Belkin on an autobiography titled Hurricanes. Martinez-Belkin also co-wrote The Autobiography of Gucci Mane, which became a New York Times bestseller. In a statement to Entertainment Weekly, Ross explained that the book will offer readers a complete view of his life before he became a chart-topping artist. “My story has always been deeper than rap,” Ross said. “With this book I wanted to go deeper than I ever have. I wanted to tell people about the life of William Leonard Roberts.” The autobiography will not only provide fans a sharp view of Ross’ climb to success, it will give him a chance to clear up some of the controversies he’s encountered throughout his career. 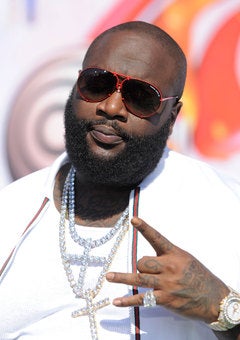 When 50 Cent revealed photos of Ross working as a corrections officer at the time he claimed to have been a street boss during their 2008 feud, he tarnished the rapper’s kingpin image. After initially refusing to acknowledge the existence of the photos that caused him to be dubbed “Officer Ricky” by his rap rival, Ross finally admitted that he held the job in 2014 though he maintained that he took the job for “sinister” reasons. The memoir will offer Ross’s take on the scandal as well as his feelings about the “numerous health scares” and “arrests” he has endured in the spotlight. Hurricanes is scheduled to be released on September 3.