By Melissa Kimble · Updated October 23, 2020
The Color Purple landed in theaters exactly 33 years ago and caused a shift. A shift, as in, the adaptation of Alice Walker’s Pulitzer Prize-winning novel, literally moved the culture forward. Directed by movie titan Steven Spielberg and scored by Quincy Jones, this classic introduced us to Whoopi Goldberg and welcomed Oprah Winfrey into Hollywood. Its intergenerational reach makes it a tear-filled journey for you and your aunties; the epitome of that impact is summed up with seven words spoken by Winfrey’s character Sofia: “All my life I had to fight.” In my 9-year-old eyes, Sofia was bold. And not bold by Hollywood’s standards, but bold as in the women that our great-great-grandmothers had to be. She was round like my great aunts in Mississippi, full of power and common sense, far ahead of their time. From the minute she came on screen, Sofia was a force. Unbought and unbothered by the opinions of men, she was going to love equally and fully and that love included demanding responsibility from the men in her world who weren’t held accountable for much of anything. When Harpo, Sofia’s husband (played by Willard E. Pugh), realized she couldn’t be contained, he asked his father, Alfred (known as Mister), for advice. Mister tells his son to beat his wife. “Wives is like children. You have to let them know who’s got the upper hand,” he offered. “Sofia thinks too much of herself; needs to be taken down a peg or two.” 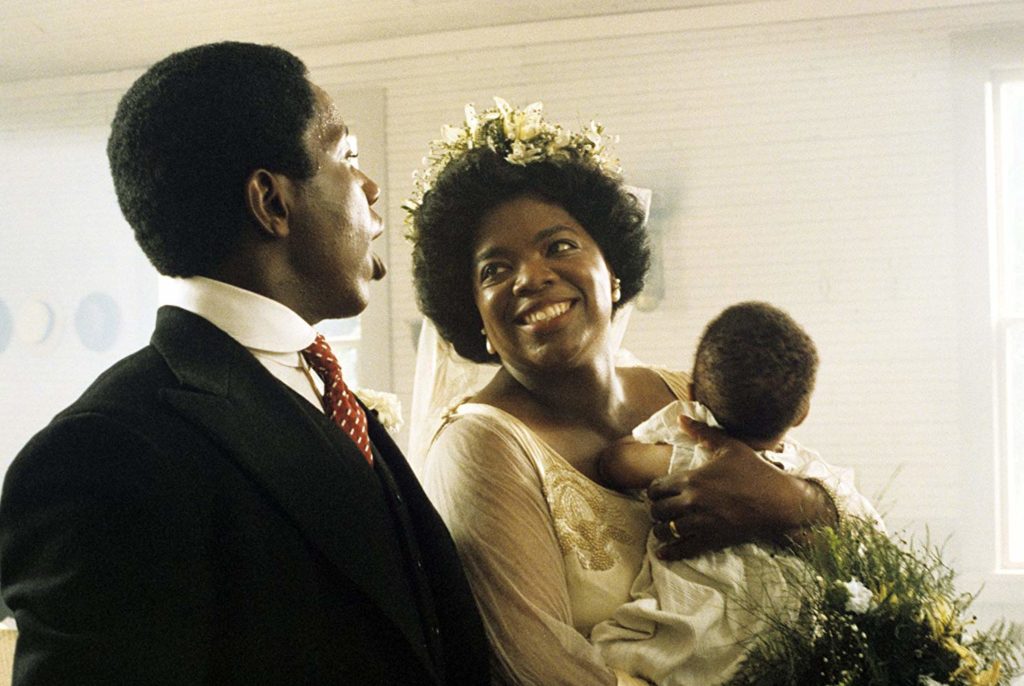 Danny Glover delivers this heinous advice with so much grace you can almost see why Harpo can’t deny him or his advice. Celie haphazardly confirms Mister’s advice when Sofia confronts her. Celie doesn’t deny it, but she doesn’t protest it either — her tools of survival are indifference. It’s how she’s been able to survive in a household where she’s constantly belittled and put down; to suppress every drop of dignity within her and go along with whatever is happening. Their advice backfires. Sofia fires back and eventually leaves Harpo and takes their children with her. But she doesn’t leave without first speaking her mind and setting Miss Celie straight. It’s an act of defiance that lights up the entire movie, with Winfrey powerfully making her indelible mark before the rest of her story tragically unfolds. It doesn’t last long, but it’s enough.

“In a world where women, especially Black women, are expected to accept whatever is thrown our way, Sofia’s fire continues to encourage me to tap into my own power.”

“You told Harpo to beat me!” Sofia screams in the field. “All my life I had to fight. I had to fight my daddy. I had to fight my brothers. I had to fight my cousins and my uncles. A girl child ain’t safe in a family of men. But I never thought I’d have to fight in my own house… I loves Harpo. God knows I do. But I’ll kill him dead before I let him beat me.” It’s a challenge, a war cry, an accurate description of where Black women were placed at that time. For Black women, seeing this defiance had to have been earth-shattering. It is for me now. It reminded me that when we stand up for ourselves, we are choosing to resist the cycles that keep us down. Even when Celie tries to protest, Sofia shares her power, reminding her that she also needs to reject playing small, and instead of waiting for the afterlife, save herself while she’s here on Earth. 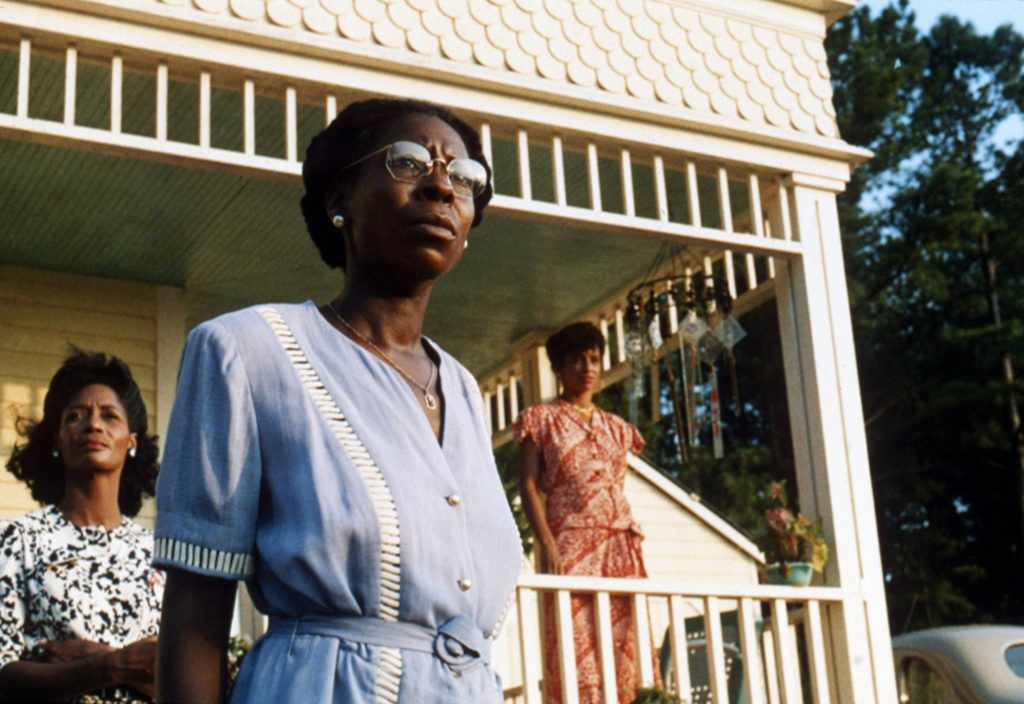 “Girl, you oughta bash Mister’s head open and think about Heaven later!” she advises Miss Celie who looks stunned and confused at the audacity of Sofia’s advice. Like many of us who have often received advice from our mothers or our sister circle, sometimes you’re not quite in the mental and emotional space to accept it. But in Winfrey’s first movie role, in which she delivered one of the most important scenes by Black women on film, it opened the door for us to express our full range. It gave us permission live the full width of our humanity, even though, like Miss Celie warned in the movie, “Folks don’t like nobody being too proud or too free.” 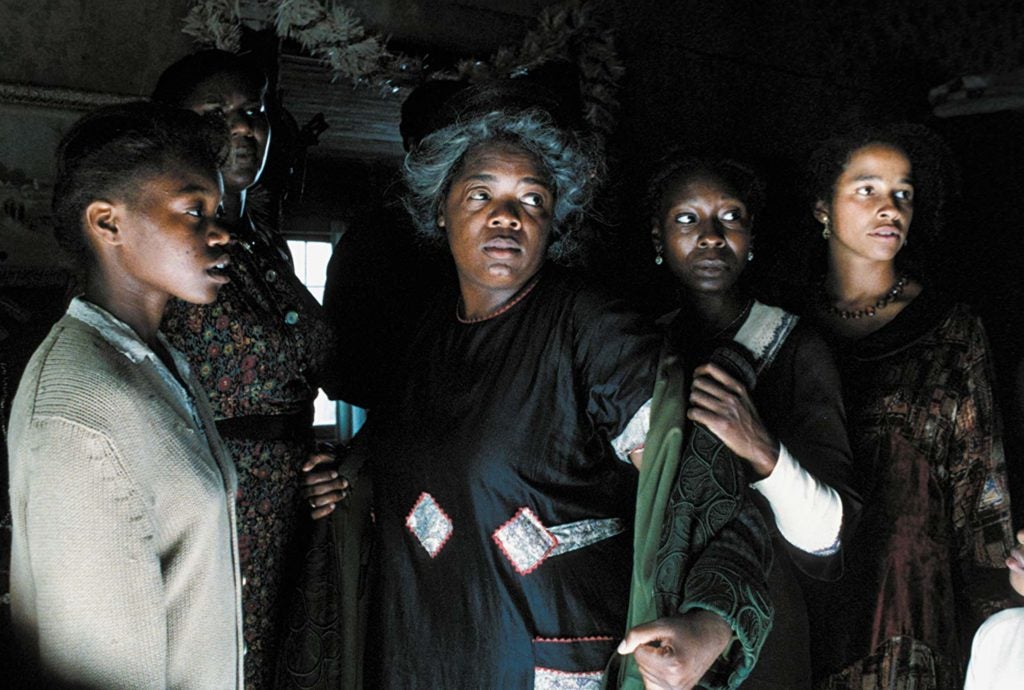 Nine-year-old me was introduced to the complexities of Black womanhood, made fully aware of what was waiting for me on the other side of girlhood. I innately knew that I was connected to both Sofia and Miss Celie’s struggle in The Color Purple, even if I didn’t fully understand it just yet. Some decades later, the film now serves as a reminder that I have options; that I always have the right to push back, to fight. In a world where women, especially Black women, are expected to accept whatever is thrown our way, Sofia’s fire continues to encourage me to tap into my own power and burn those rules to the ground. Melissa Kimble is a Brooklyn-based writer, digital strategist, and founder of #blkcreatives, a collective that advocates for Black genius across creative industries.
TOPICS:  Alice Walker Oprah Winfrey The Color Purple